Rolling shutter has been the bane of DSLR and mirrorless video shooters since the beginning. In fact, for users of just about any camera with a CMOS sensor. This is all down to how CMOS sensors traditionally work, scanning the scene line by line. Each line is captured at a slightly different point in time, so as you pan, it appears that subjects are leaning or wobbling. Hence it’s become affectionately known as the “jello effect”.

That may be all set to change, though, thanks to a new breakthrough from Sony who has developed an entirely new CMOS sensor with a global shutter function. Announced last week at the International Solid-State Circuits Conference (ISSCC) in San Fracisco, the new sensor features a pixel-parallel analogue to digital converter. This means that it can read the data from all of the pixels simultaneously. With a traditional CMOS sensor, the blades of the spinning fan would appear bent and distorted as the sensor read the scene line by line over time.

The new sensor is quite low resolution, though, at only 1.46 effective megapixels. For comparison, 1920x1080p HD is just under 2.1MP. In fact, the sensor Sony have been working on is 1632×896 pixels. So, you’re probably not going to see this coming to DSLRs or mirrorless cameras anytime soon. The sensor is slightly smaller than Micro Four Thirds, coming in at 16.08 x 12.73mm, but it’s a very positive start.

The new Sony sensor comes with newly developed low-current, compact A/D converters positioned beneath each pixel. These A/D converters instantly convert the analog signal from all the simultaneously exposed pixels in parallel to a digital signal to temporarily store it in digital memory. This architecture eliminates focal plane distortion due to readout time shift, making it possible to provide a Global Shutter function, an industry-first for a high-sensitivity back-illuminated CMOS sensor with pixel-parallel A/D Converter with more than one megapixel.

Sony defines the global shutter function as one which “alleviates the image distortion specific to CMOS image sensors that read pixel signals row by row”. Traditionally, CMOS sensors are read line by line in series. It’s a similar principle to the way CRT televisions used to display frames of video. But when it comes to image capture, because things move in front of the camera over time, when the camera reads the last line, the subject is no longer where it was when it read the first line. This is why plane propellers can often appear like this to the camera… 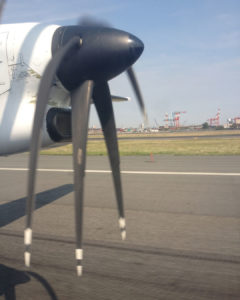 Being able to process each of the pixels in parallel means they can all be read at the exact same time. So fast moving objects will appear as they do to the human eye, and video will no longer see the dreaded “jello effect”.

Personally, I can’t wait until this tech matures and starts becoming commonplace. I was always a little bummed out that the industry decided to pursue CMOS over CCD sensors (which my Nikon D100 and D200 cameras had). While CMOS sensors definitely had their cost, ISO and other advantages, I do miss having that global shutter.

You can read more about the new Sony sensor tech over on the Sony website.

« This video was shot above fireworks and played in reverse, and it’s spectacular
This is how NASA shot their iconic footage of Apollo and other launches »