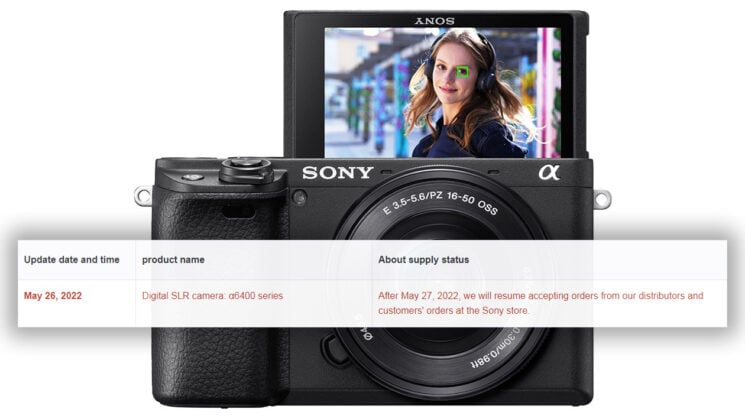 Could the supply chain issues possibly be coming to an end? Well, we’ll have to see about that but for now at least, Sony has announced that they’re able to resume production of 2019’s Sony A6400 APS-C mirrorless camera. Sales of the model were originally suspended in November 2021 due to the ongoing silicone shortage and supply chain issues. Now, though, it appears to be back. At least at the Sony Store, with regular retailers coming soon.

Sony Japan’s statement says that they’re now accepting orders from both distributors as well as customers at the Sony store for the A6400. And while distributors can order, they haven’t yet said when those distributors will receive them and when we’ll be able to order from our favourite local (or online) camera shops again. It also looks like the A7 II and A6100 might not be coming back at all.

The announcement from Sony says that “after May 27, 2022, we will resume accepting orders from our distributors and customers’ orders at the Sony store” and it doesn’t say much beyond that about the A6400. The fact that they feel confident enough to resume at all is a good sign. At the moment, the Sony A6400 body only and its various kit forms are still listed as being “Back-Ordered” or “Temporarily Out of Stock” at many retailers. Hopefully, it won’t be too long of a wait for them to actually get back into the hands of retailers again.

Production of the A6400 ended along with the Sony A7 II and A6100 bodies. As of right now, only the A6400 has been announced as back in production. I think it’s more than likely that we may never see the other two return. I don’t think they’d be missed too much if that happened, though.

At the end of 2021, the company announced that “there is no prospect of future parts supply” for the Sony A7 II or A6100 and that “2021 Production will be completed on December 23rd”. The A7 II was probably about to be retired anyway, given the release of the A7 IV. With apparent difficulties in getting A6100 parts, we might be waiting on its replacement model rather than its reintroduction. They’re also no longer listed on the suspended products lists, which strongly suggests they’re not coming back.

Sony also stopped accepting orders on the ZV-E10, A6600 and A7C at the same time they made the announcement about A7 II and A6100 production coming to an end. While B&H and other retailers list the cameras as still being out of stock, there do appear to be a few A7Cs available on Amazon – and they’re actually being sold by Amazon, not a 3rd party seller. There’s no word yet on when those models may officially return to production.

« Samsung say their 200mp camera sensor is the cat’s whiskers with building-sized photo demo
Whispers of new Canon camera with 100 megapixels to launch in 2023 but will it be the EOS R1? »