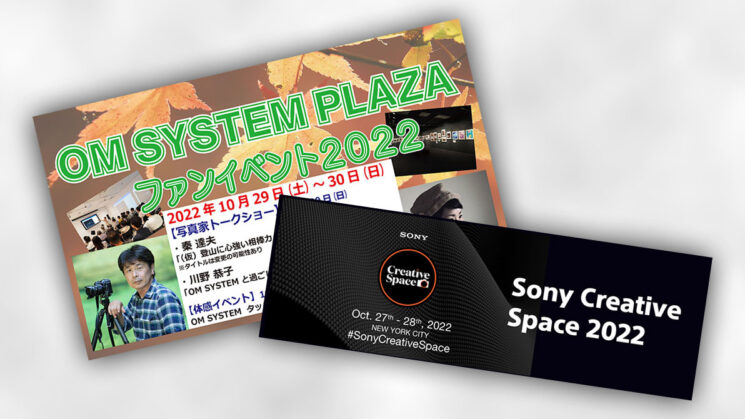 Both Sony and OM Digital have scheduled events for late October, suggesting that recently rumoured Sony A7R V and OM Digital OM-5 camera bodies are expected to be announced very soon. There have been a handful of OM-5 leaks with a possible announcement at some point this month but there hadn’t previously been any specific dates mentioned. Now, their OM SYSTEM PLAZA Fan Event 2022” is coming on October 29th & 30th in Tokyo, Japan.

The Sony Creative Space 2022 event is scheduled to take place in New York City on October 27th and 28th making the rumoured October 26th announcement date seem pretty plausible. This is usually the time when Sony has its own event at the same time as PhotoPlus Expo (or “Create NYC” as it’s now called) but with the event being cancelled this year, it looks like Sony’s pushed their date back to later in October.

Naturally, there’s been no official word from either company that there will, for sure, be camera announcements coming but given recent rumours, the timing is quite convenient for both of them. OM Digital, particularly, really needs to flesh out their lineup since taking over Olympus and an OM-5 has been on the cards for a while now. The OM Digital OM-1 has been generally well received by Olympus shooters, so hopefully, they’ll be able to keep up that kind of response.

As for Sony, well, the A7R IV was released in 2019, so it’s not really all that old, however new technology in the A7S III, A7 IV, A1, FX30 and other recent cameras is notably missing from the A7R IV – not to mention the menu system –  so it makes sense that they’d want to refresh that system now.

Exactly what features and specifications we’ll see from both companies, though, still largely remains a mystery. But it sounds like we won’t have long to wait to find out!