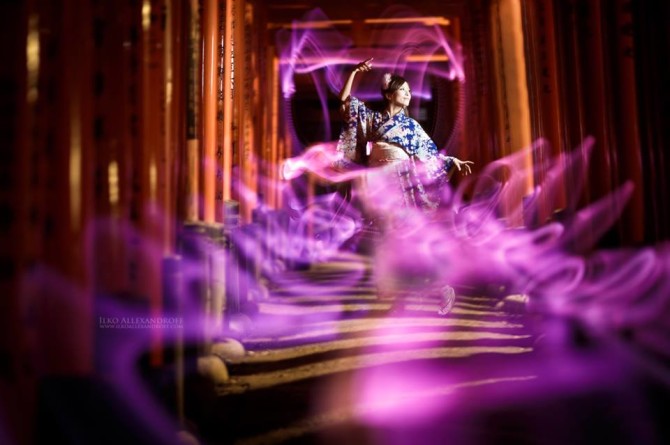 The location for this light painting shoot is one of the most famous tourist spots in Kyoto, the Fushimi Inari Shrine. It is famous for its endless red gates, that look like tunnel! I’ve been there so many times, and always wanted to do something with this wonderful location, but this was the first time to actually take some photos!.

To light the model, I’m using a RoundFlash modifier powered by a Nissin MG8000 strobe to the model’s right side. The flash is set at around 1/4 power setting and it is in manual mode.

The location is tight so I opted to have the strobe in the frame. I knew I will have to take the strobe out in post. It is too big for a simple clone, so I took a clean photo (same location and settings, no model or strobe) fer referance. I will later use this photo to remove the strobe. 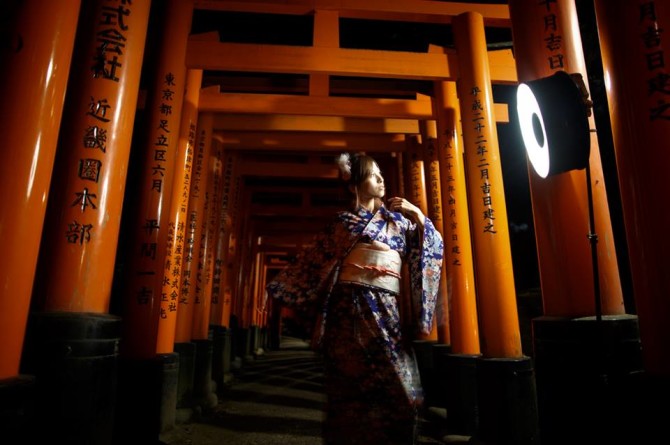 I started out by taking a few shots first without light painting – just setting up the strobe lights and deciding the exposure of the background. 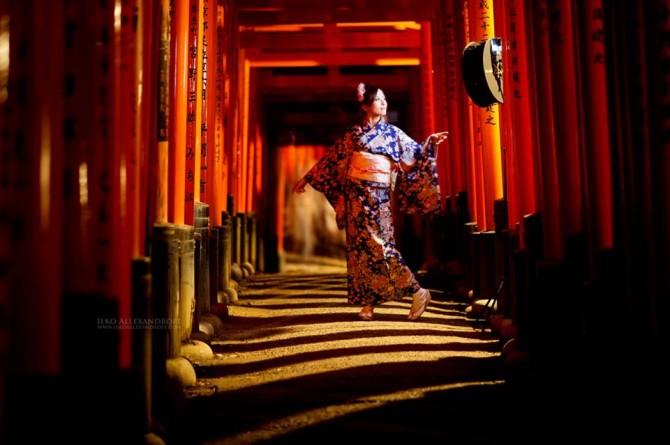 I’m triggering the strobe with a Cactus V6 trigger. I love using this unit because it allows me to control flash power (on multiple strobes) right from the V6 unit attached on the camera.

If you use front curtain sync (strobe at the beginning of the exposure), then the flash pops at the beginning of the exposure, freezing the subject. Then for the entire exposure ambient light (or glow sticks in this photo) will contaminate that frozen image. You’ll end up with trail covering the initial freeze. Luckily, the Cactus V6 can handle this. (Nikon shooters, you don’t have this issue, but Canon does not enable native rear curtain sync for external strobes). That’s why I’m using the DELAY mode on the Cactus V6, and I set it at 9999 milliseconds, this tells the camera trigger to fire the strobes just before the shutter closes on the 10th seconds exposure.

The light painting was done using glow sticks. I used 3 glow sticks for this – One in each hand and another one tied to my best. After starting the exposure, I walk away from the camera towards the model and “paint” some light. Near the end of the exposure, I continue to draw behind the model. 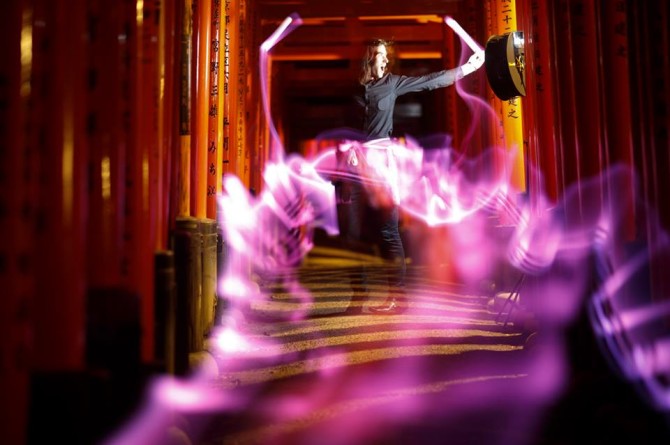 I shot with a Canon 1DX and a 135mm F/2L lens at a wide open aperture. This is how you get that nice blurred look of the gates. It also allowed me to shoot at the relatively low ISO 50. Here is the complete schematics of the shot, in case you want a reference. 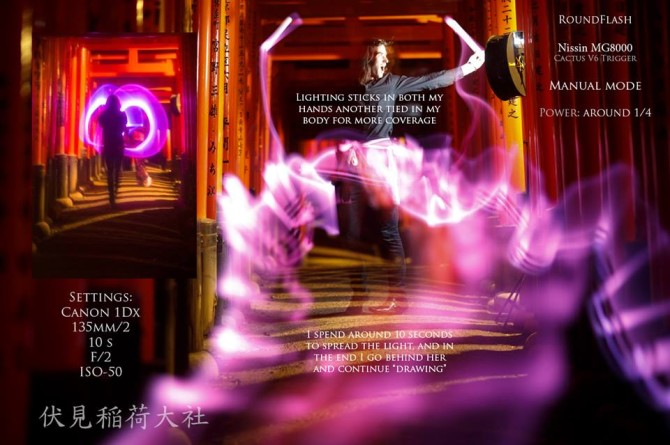 Originally from Bulgaria, Ilko Allexandroff is a photographer based in Kobe, Japan. He mainly doing portrait, fashion and weddings. You can see more of his work on his blog, as well as on his Facebook, 500px, twitter  and Flickrstream.

Nikon denies it is cutting 1,000 jobs in Japan, then announces 1,000 job cuts in Japan
« Dancers Bare It All In Streets Of NYC For Striking Portrait Series: Dancers After Dark [NSFW]
Accepted Model Release Mobile Apps for Stock Photography »