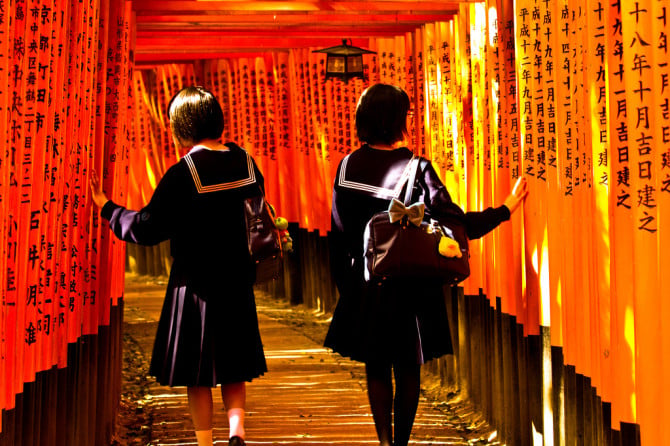 Earlier today, The Japan Times released that officials in Kyoto, Japan, had revised ordinance in order to crack down on the practice of upskirt photography (making unauthorized photographs under a woman’s skirt). The highly popular tourist destination in Japan is flooded with tourists every spring, mostly high school students, and “upskirting” had reached disturbing levels, with even “a whole subgenre of magazines” existing for individuals to sell their images.

This perverted practice has always been outlawed in Japan, but only in public places such as shopping centers, railway stations, and public transport. Individuals taking these photographs had found a loophole which made them untouchable by police by taking their photos in places not covered under the definition of a “public place.” The change in ordinance has seen the expansion of the “scope of protection” to include places such as schools, workplaces and hospitals, and has increased penalties for the use of hidden cameras in areas such as hot spring baths, changing rooms and public restrooms. Penalties can now be as high as ¥1 million (about $9815) or a year in jail.

This isn’t the first time that we report on “upskirting” and the harm it causes. Just earlier this year, we wrote about a case in Massachusetts where the judge ruled the ‘photographer’ was within his rights as the individuals he had photographed were in public and neither nude nor partially nude. I am sure I am not the only photographer who finds “upskirting” abhorrent, though, and despises such practices for multiple reasons.

This move in Kyoto is a great step in the right direction for those taken advantage of in such a vulgar manner. Protecting people in such situations is the key, here. But there is the added advantage that it is helping protect the integrity of genuine street photographers, photographers and tourists alike.

We do recommend all photographers learn their rights and what they are allowed and are not allowed to take photographs of in public. But, at the same time, we do hope that responsibility will be taken and people’s privacy will not be invaded.

The question remains is the punishment enough? What else can be done to stop this poor practice and help protect photographers, particularly street photographers, from being labelled the same as those who create “upskirting” materials? We only hope that move places take measures to eliminate it as much as humanly possible.

[via The Japan Times | image by Elvin]

How I Shot This Light Painting Photo In Fushimi Inari Shrine, Kyoto, Japan