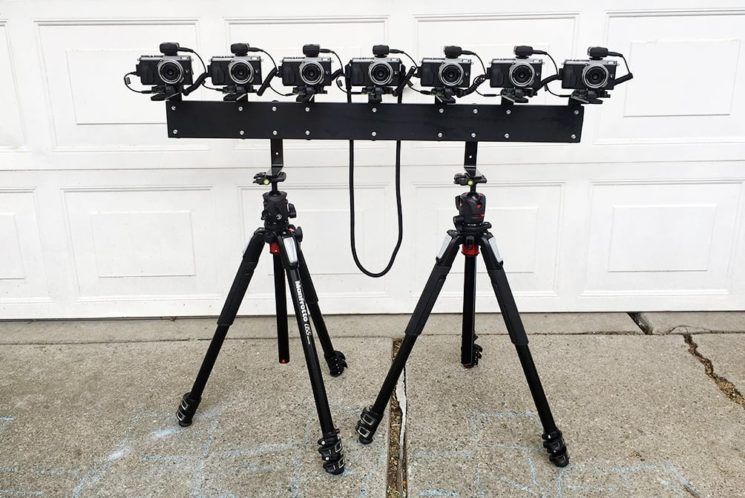 In the summer of 2016, photographer Jeffrey L Bennett experimented with creating animated GIFs using multiple cameras. He wanted to animate a moment, frozen in time, from several angles.

It wasn’t my first experience with animated sequences of images, for years I’ve been incorporating animated GIFs in my wedding, engagement and portrait work. They have been a big hit with my clients. I created the animations below using bursts of still shots from a single camera (other photographers are making cinemagraphs from video, but I preferred the stop-motion look of a group of still).

After several years thinking of this project I finally decided to build a multi-camera rig. I considered many different cameras. Originally I was going to use Canon 1Dmk IIn bodies because I owned three of them. The portability of this setup wasn’t so good. I considered Canon’s digital Rebels with their kit lens but thought a prime and fixed lens setup might be better to eliminate possible variance in focal length. The release of Fujifilm’s tiny X70 mirrorless camera made me finally pull the trigger.

It was built to be as small as possible while holding seven Fujifilm X70’s and fitting in the back of my Chevy Volt. The backbone of the rig is just a wooden board, painted black, with L-Shape flash brackets bolted to it. There are 7 L-Shape flash brackets pointing up with quick release plates for the cameras and two brackets pointing down for connecting to a pair of sturdy 055 tripods.

In some of the GIFs there is unwanted subject movement which ruins the “Bullet Time” effect. I made sure all seven cameras were set to have all the same settings. I tried different shutter speeds. I tried different methods of turning the cameras on. I made sure all cameras were in manual focus mode too. Nothing I tried could overcome the slight variances in when each camera would fire. Often 4-5 of the seven were on time and 2-3 were ahead or behind the rest. It wasn’t the same cameras out of sync in every shot either. Switching from RF to wired triggering didn’t help. The design of the X70 camera itself might be the cause of the timing errors.

I’ve since sold all the X70’s. I had a ton of fun with this project and I’m glad I went after it even though it didn’t quite work as I had hoped. I still love animated GIFs and will continue to experiment with new ways to make them.

What was the initial reactions of people when they saw the rig?

The 7-camera rig definitely caused confusion. My subjects only replied, “Wait, what?” after I explained the idea. It didn’t help that setting up the rig took about ten minutes. I’ve gotten very fast & efficient setting up and capturing the single-camera gifs. Getting the correct aim, focus, and exposure across seven cameras was daunting. Not to mention the size and weight of all the pieces. Ultimately I let go of the seven X70’s and shelved the multi camera rig due to the previously mentioned issues and the inconsistencies in firing timing. I’m still very interested in the idea and will likely build another with different cameras.

Do you think that video and animations are the future of how we consume content?

I think we’ll continue to see stills, video, and digital effects mashed up in new ways. Many of these new mashups are user friendly apps like Boomerang, making it easier for anyone to create little animations. I don’t think GIFs, cinemagraphs, animations and video clips will replace still photographs. I think they’re a wonderful accompaniment.

Jeffrey L Bennet is a wedding photographer, Fuji convert and animated Gif creator based in Detroit, MI. If you’d like to see more of his work, check out his website, like his Facebook page and follow him on Instagram. For more of his awesome GIFs, check out his Tumblr profile. This article was also published here and shared with permission.