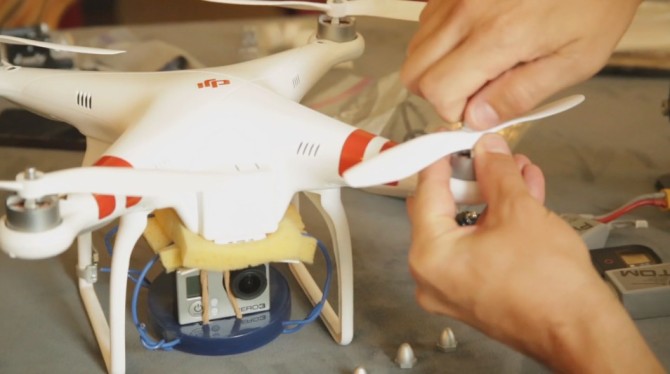 Shooting aerial footage with a DJI Phantom and a GoPro can be an awesome thing, but while the system takes care of getting the camera in the air and actually capturing some video, it has an inherent flaw which creates a Jello Effect if the rotor vibrates too much.

And indeed both the net (and the stores) are filled with tips and advice on reducing this Jello Effect. If you want a deeper understanding on where this effects comes in the first place, take a look at our rolling shutter intro. Anyways, it’s there.

The secret for reducing the jello effect is to disconnect the vibration coming from the DJI rotors from the camera. And this is exactly what the team at Human Resources did.

The team went through several options before coming up with a simple solution: Balancing the DJI propellers, using an anti-vibration system for $45 which weirdly has a direct hard connection between the vibration reducer and the DJI body. Here is a short demo of the jello effect:

Eventually, the team used a sponge and a few rubber bands to isolate the camera from the DJI.

Stabilize Your GoPro Footage By Pressing It To Your Face

« Tutorial: How To Create Film Sets From Scratch
Unique Photography Project Takes ‘Self Portrait’ To All New Levels »