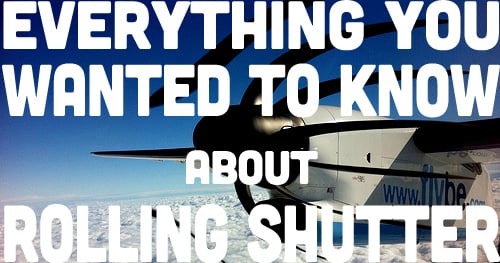 Rolling Shutter is the way that most DSLR are shooting video. (and point and shoots and iPhones too). For 95% of the time it does not really matter what type of shutter is used for capturing video, in the other 5% it matters a lot. Following is a break down and explanation of what is Rolling Shutter why it is being used and what are its quarks.

Rolling Shutter, usually found in CMOS sensors is a method of capturing image that does not expose the entire sensor simultaneously, but rather exposes different parts of the sensor in different points in time.

Now, this is not an actual physical shutter that is moving across the frame, but rather the sensor telling different parts of it to collect light.

Here is a short demonstration of how rolling shutter works in a simplified 10×10 CMOS sensor.

Generally speaking, CCD sensors utilize a Total Shutter and CMOS sensors utilize Rolling Shutter. While there are many reasons for camera manufacturers to choose one type of sensor over the other – processing speed, power consumption, cost, complexity and more, CMOS sensors (which use the rolling shutter method) tend to deliver the image faster, thus clearing the sensor for the next shot.

This may not be an issue with stills, but is a huge factor when selecting a sensor type for video – the sensors needs to take 24,30 or 60 frames a second. This is why almost all our DSLR and Smartphones sensors are using rolling shutters.

Oddly enough, this is also when we can most noticeably see the effect of Rolling Shutter. Especially with fast moving or vibrating objects.

Here is what an airplane propeller looks like when shot with a rolling shutter.

and here is why

Finally here is a comparison of a propeller looks like when using a Rolling Shutter vs a Total shutter.

When Will This Happens?

You get the most noticeable Rolling Shutter effect when the camera and the object you photograph change in relations to one another with the “roll” of the shutter. In most cameras the shutter rolls for about 1/30 of a second and during that time any movement is hardly noticeable. But you get a distinct Rolling shutter effect when you shoot a fast moving object like an airplane propeller.

But this is not the only case, imagine shooting a still image from the window of a fast moving car. Say you are shooting a person. Since the sensor is moving in relation to the subject the same rolling shutter effect will happen. Here is a simplified graphical explanation taken with our 10×10 CMOS sensor. It is a bit exasperated with such a small sensor and a fast moving man, but the idea is the same for every picture you take through a window of a moving vehicle.

Luckily, you would need to drive very fast for this effect to be noticeable. But if you were wondering why trees look a bit diagonal in pictures taken from a moving train, this is why.

If you are doing any kind of flash photography, there is a good chance you are familiar with a close relative of the rolling shutter – Partial Flash sync.

In high shutter speeds, the second curtain may start hiding the sensor before the first curtain finished its move. when this happens, an actual slit is traveling across the sensor.

In this case, when the flash pops only part of the sensor is getting hit with the light from the flash. There is a great reading about this on the tangents blog.

It’s Not All Bad

Just before we wrap up, I don’t want you to think that rolling shutter is all bad. While it is a pain in the neck for most applications, it allows for some pretty cool applications as well. Like watching the waveform of guitar strings.

This video helps you understand the rolling shutter effect