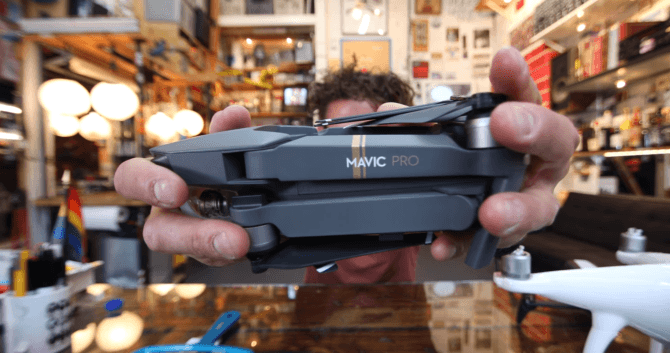 For some, the image quality is going to take a distant second to ease of use and convenience. There’s no doubt that the new DJI Mavic Pro is super convenience. Fitting into a small bag, or a large pocket, it’s easy to take wherever you go. But, is that convenience going to be enough? Is it going to make Phantom 4 owners sell up and replace it with a drone that costs almost as much and doesn’t offer the same quality?

Well, for Casey Neistat, the answer is a definite yes. To satisfy some of the haters from his previous video showing off Mavic footage at a mere 1080p, Casey shot today’s video in 4K. In it, he puts the DJI Mavic Pro head to head with the DJI Phantom 4. He also includes the GoPro Karma. Ok, well, he sort of includes the Karma. He doesn’t have a Karma yet, but he does have a GoPro Hero 5 Session, which is the camera the Karma uses.

But, here’s the footage, check it out for yourself.

Considering it’s supposed to have the same sensor as the camera found in the Phantom 4, one can only surmise that they’re either using a much crappier lens or way more compression.

For the sake of completeness, in the USA the Mavic Pro is $999 with the Phantom 4 at $1,199. The price there is a little more reasonable, but even at that price, it still isn’t enough for me to sacrifice that much quality.  Even when scaled down to 1080p and sharpened the Mavic footage just looks terrible.

But what do you think? Will you happily sacrifice quality for the sake of convenience? Did Casey just get a bad sample? I mean, Jon Olsson’s footage didn’t look that bad for the most part. Or will you just keep on using your current drones and wait for the next generation of Mavic to see what it has to offer? (that’s what I’m doing). Let us know in the comments.