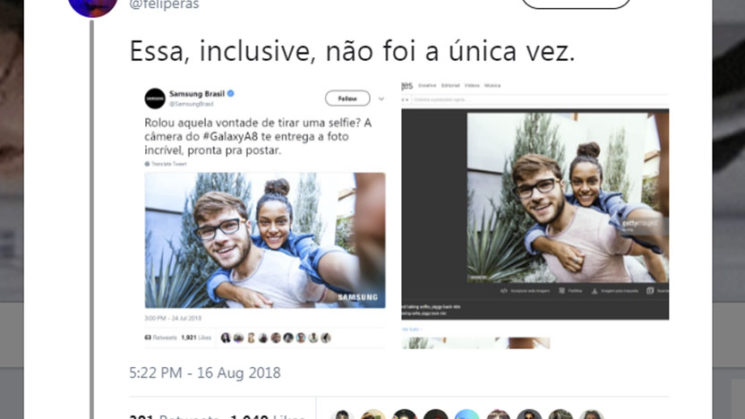 With as much as Samsung gives Apple a hard time in its promotional material, Apple fans will probably get a chuckle over this one. Samsung has, apparently, been using stock images from Getty to show off the capabilities of the Samsung Galaxy A8 front camera.

Samsung Brazil has been found to have downloaded and used at least two stock images to show off the Galaxy A8’s capabilities. Uncovered by Twitter user “feliperas“, screenshots showing the Samsung tweets alongside the Getty listing for the image were posted.

The tweet essentially translates “Who are you trying to fool, Samsung Brazil?”. He then points out that this isn’t the only one, either.

Samsung did respond, sort of admitting that they screwed up.

Oops, sorry, you’re right, Feliperas. The answer given before was really not correct. Many of the photos we post are taken using our smartphones, but some, like this, are a database of images that also express the attitude of our target audience.

Samsung then understandably removed the offending tweets containing the photos. This may have been a simple mistake, but this isn’t the first time a smartphone company has been called out for using images not shot by one of their phones in order to promote the cameras in one of their phones. Huawei did it in 2016 when they were launching the then-new Huawei P9 with its fancy Leica cameras using Canon 5D Mark III photos.

I suppose with the amount of content that companies like these put out on a daily basis across multiple platforms the occasional mistake is bound to slip through here and there.