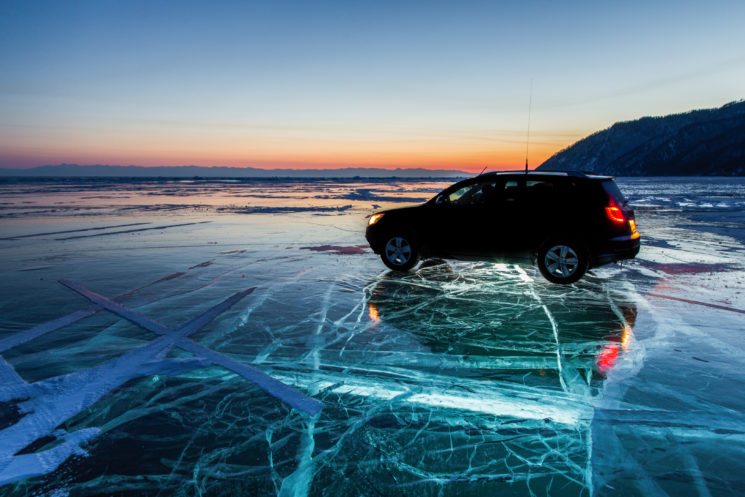 If the coronavirus pandemic hasn’t closed people inside their homes, it has at least closed them inside their countries. In other words, we can only travel without crossing a border. But people in Russia are lucky to live in a huge country with lots of things to visit. And during the pandemic, Lake Baikal in Siberia turned out to be particularly popular. People from all over Russia travel for hundreds, even thousands of miles only to take a selfie at this truly incredible location.

Lake Baikal is the largest freshwater lake in the world by volume, and also the world’s deepest lake. It’s located in the south of Siberia and it was declared a UNESCO World Heritage Site in 1996. Although the lake is huge and deep; it freezes over the winter. The ice can be as thick as 6 feet (2m), and you can easily walk on it, even drive a car like the photo above shows. The lake has been popular among photographers, and we’ve even featured photos taken there by Kristina Makeeva (here too) and Alexey Trofimov.

But other than professional photographers, the past year has made Lake Baikal especially popular among… well, everyone. It has become more popular among Russians than ever been before, according to the New York Times. Before the pandemic, mainly foreigners would visit the lake, especially folks from China. Lake Baikal is not only a place to visit for the most instagrammable selfies, but people even travel for up to 2,000 miles to visit it. At the moment of writing this, there are around 1.5 million photos under hashtags like #baikal or #lakebaikal, and I’m sure there are more to come.

What I find interesting is that people reportedly only travel to take photos and clips for Instagram and TikTok. The New York Times calls it “a distillation of tourism in the Instagram age.” And people who work with tourists there say that they’re “just in shock” with the tourist boom. A guide at an ice grotto, Elvira Dorzhiyeva, blames social media for this number of tourists:

“The social networks have led to all this. There’s these top locations, and it’s like — ‘All I care about is that I want what I saw online.’”

The NYT’s story shows tourists at Lake Baikal as folks who travel for only selfies, but I think there’s more to it. We’ve all been severely limited since the pandemic began. Even when we went out of total lockdown, we couldn’t travel abroad without a negative coronavirus test, a mandatory quarantine, and so on. Therefore, most people think that traveling abroad is just not worth the whole process. It’s much easier to visit locations in your own country, and it doesn’t require that entire process. And Baikal Lake sure is an attractive location to visit, so why the hell not?

On the other hand, we can’t deny that social media affect tourism. People do want to recreate photos they saw online and we’ve seen plenty of examples when social media led to increased tourism. Sadly, it’s not always a good thing. There has been damage to nature; animals and people have been harmed in different ways, there was even a “zombie apocalypse” at a sunflower field in Ontario.

So, on the one hand, this increase in tourism was probably expected since we’ve all been closed within the borders of our own countries. And it doesn’t have to be a bad thing as long as people respect nature, locals, and other tourists. But as we all know, it’s not always the case, so I hope we won’t hear stories of selfie deaths and other tragedies and incidents at Lake Baikal.

[via the New York Times]

These are the hard truths about photographing people while traveling