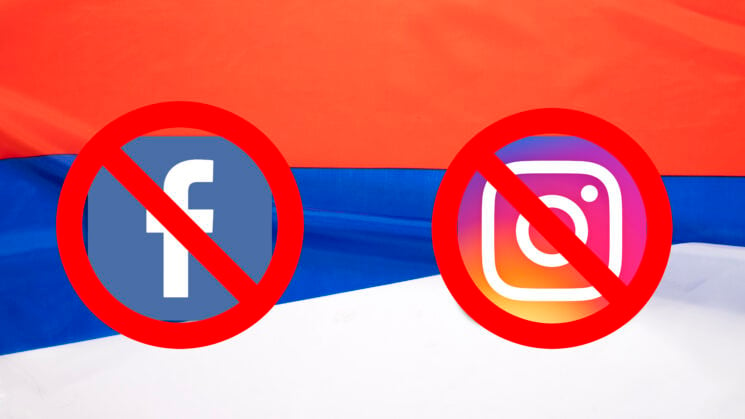 Earlier this month, Russia decided to ban Facebook citing “discrimination against Russian media.” But as of today, Instagram is banned in this country, too.

One of the reasons behind this decision is the fact that Meta has allowed posts that call for violence against Russian soldiers and politicians. But both moves have inevitably caused some censorship concerns, too.

Federal Service for Supervision of Communications, Information Technology, and Mass Communications (Roskomnadzor) issued a statement on 4 March to inform the public of the Facebook ban. “Since October 2020, 26 cases of discrimination against Russian media and information resources by Facebook have been recorded,” the statement reads. “In recent days, the social network has restricted access to accounts: the Zvezda TV channel, the RIA Novosti news agency, Sputnik, Russia Today, the Lenta.ru and Gazeta.ru information resources.”

Back then, Instagram was still available in Russia. But soon after that Meta had a concerning temporary change in policy. It was first noticed by Reuters, which reported that Meta allowed Facebook and Instagram users in some countries to post content that’s normally sanctioned. This includes calls for violence, harm, and even the death of Russian soldiers or politicians.

The Verge spoke to Meta spokesperson Andy Stone, and he confirmed the decision:

“As a result of the Russian invasion of Ukraine we have temporarily made allowances for forms of political expression that would normally violate our rules like violent speech such as ‘death to the Russian invaders.’ We still won’t allow credible calls for violence against Russian civilians.”

This decision reportedly led to what I think was inevitable anyway: Russia banned Instagram, too. Roskomnadzor issued another statement on Friday, announcing that Instagram would be banned in 48 hours.

“Messages are circulating on the Instagram social network encouraging and provoking violent acts against Russians, in connection with which the Russian Prosecutor General’s Office demanded that Roskomnadzor restrict access to this social network.

Since it will take time for active Instagram users to transfer their photo and video materials to other social networks and notify their contacts and subscribers, Roskomnadzor decided to complete the procedure for imposing restrictions on access to Instagram at 00:00 on March 14, providing users with an additional 48 hours of transition period.”

Head of Instagram, Adam Mosseri, spoke up about Russia’s decision. He said that it would “cut 80 million in Russia off from one another, and from the rest of the world,” and he’s not wrong. It will also cut off a significant portion of earnings for Meta, but that’s a different topic.

On Monday, Instagram will be blocked in Russia. This decision will cut 80 million in Russia off from one another, and from the rest of the world as ~80% of people in Russia follow an Instagram account outside their country. This is wrong.

This is all wrong on so many levels that I don’t even know where to start. First of all, I’m shocked by the double standards Meta has just introduced. They constantly try to make it seem like they fight against trolls and calls for violence, and yet then they openly allow it towards a specific country.

Then, Russia cutting off social networks is also bonkers. If you ask me, it is a form of censorship and people are right to call out on Russia for that. And needless to say, this entire war is complete madness, to begin with.

Of course, I have a strong opinion on the subject (surviving NATO aggression back in 1999, before social media). But I will keep it to myself. I wonder what you think of Russia’s and Meta’s moves, and feel free to leave your thoughts in the comments. Don’t call for violence though, we don’t approve it – we’re not Meta.