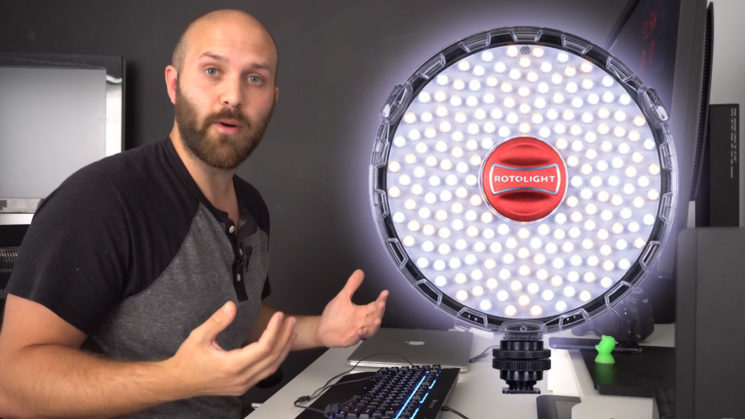 I wrote about the announcement of the new Rotolight Neo 2 a couple of days ago. Looking at the specs, I wasn’t really all that impressed for my own needs. I have Spekular and Aputure lights for video, as well as Nikon & Godox lights for stills (all of which support HSS). So, for the cost, and limited power, the Neo 2 just isn’t worth it for me. So, I didn’t pay much more attention to it.

Photographer Rob Hall, though, has had a couple of days to really consider the specs of these lights and what they mean for photographers. Are they really the revolutionary product that the fancy marketing would lead us to believe? Or is it all (low powered) flash and no substance? Rob, at least, doesn’t seem particularly impressed, if this video is anything to go by.

Update 12/9/17 – Jason Lanier has responded with a complete hands-on video review of his own, showing off the capabilities of the Neo2 to address Rob’s concerns.

Update 9/9/17 – Rotolight have been in touch with Rob to clarify some points and have offered him a Neo 2 to allow him to make a more comprehensive assessment of the light. Responses from Rotolight are added throughout this article to correct some assumptions made in the video. You can read their complete response in the comments on Rob’s video.

Throughout the video, Rob talks about the points mentioned in the video. He breaks down how various technical processes work into plain English, to illustrate why this light can’t possibly compete with traditional flash for photography.

He does mention some positive things about the Neo 2, like the fact that the continuous output is greater than its predecessor. The ability to create various colour effects, is another very neat feature. And lights like this suit many videographers just fine. but for photographers? Maybe not so much.

The first obvious point that Rob talks about is the total absence of recycle time. As soon as the light flashes, it’s immediately ready to fire again. But this goes counter to every other flash ever made. Yes, it’s an LED, it’s a different type of technology, but a flash works by dumping a whole lot of power (more than the batteries can supply) in a very short amount of time. So, they charge up capacitors that can dump their energy into a light very rapidly.

If the recycle time is instantaneous, pulling straight from half a dozen AA batteries, how powerful can it really be? And if the LEDs are capable of this kind of output drawing straight from the battery, why can’t the continuous mode be just as bright? Sure, it’d drain your batteries a lot faster, but isn’t that a choice for the user to make?

Rotolight response : Rotolight (a British company with over 29 patents) have developed a unique industry first patented LED driver technology that allows us to deliver a huge increase in flash power by overcharging the LEDs (+500% of the maximum continuous light output) without needing to use a capacitor, hence why, we have no recycle time when typical speedlites have a 3-4 second recycle time. 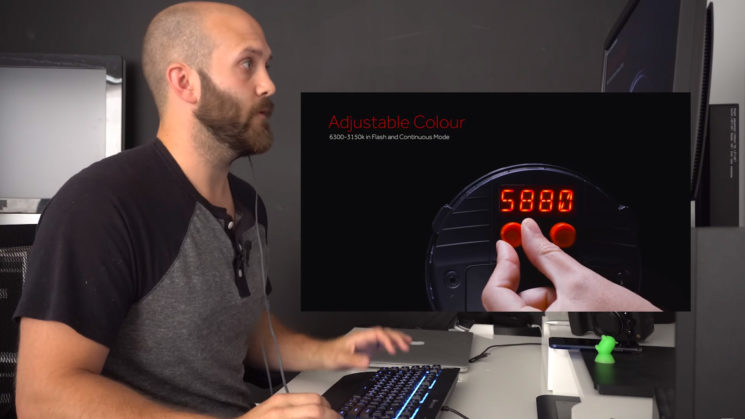 The fact that it’s a bicolour LED light with an adjustable colour temperature is often seen as a positive thing. Many lights do it. But, it does not come without expense. And that expense is often power. If half your LEDs are 3150K and the other half are 6300K, then you’re only getting maximum light output somewhere in the middle of that range around 4100K. When you’re in daylight temperatures, only half of your LEDs are turned on. 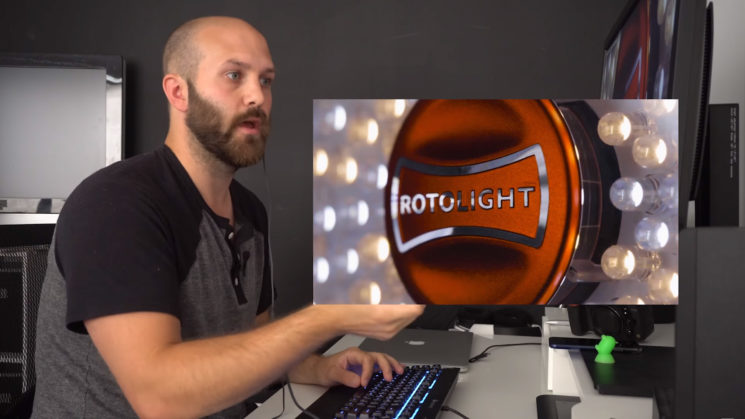 This is the reason why I always go for daylight LEDs. At daylight temperatures they’re at least twice as powerful as their bicolour counterparts. As I’m often shooting at daylight temperatures, it’s a no-brainer. If I want to drop down to tungsten, I’ll just gel it. Sure, a daylight LED with a CTO gel loses about a stop of light, but a bicolor LED has half the number of tungsten LEDs. So, the output would be about the same. In Daylight, though, lots more power.

Rotolight response : A lot of other LEDs work that way, and the principle that Bi Colour LEDs blend together to achieve different colour temperatures is correct. However, you are wrong stating that at 3100K or 6300K half of the LEDs are off. At every colour temperature, every single Rotolight LED is on, as we use a 2800K and a 7000K LED which allows us to achieve a colour range far superior to any other light on the market (most LEDs if they can change colour, do 3200-5000 approx, 5600 is great for bright daylight, but in cloudy conditions it’s too warm, you need to go to a bluer 6300K which only Rotolight can do).

Rotolight response : LEDs are 96% more energy efficient compared to tradition tungsten/xenon bulbs. Hence why they are now replacing lights in your home, your car, etc. If you bought an LED bulb for your home it says on the box 120W “equivalent” because it is producing a level of light output people associate with an older 120W bulb, but it only consumes 12W doing so. That is the massive benefit of LED, and that is how we product 85,000 full power 1:1 flashes, on 6 AA’s. 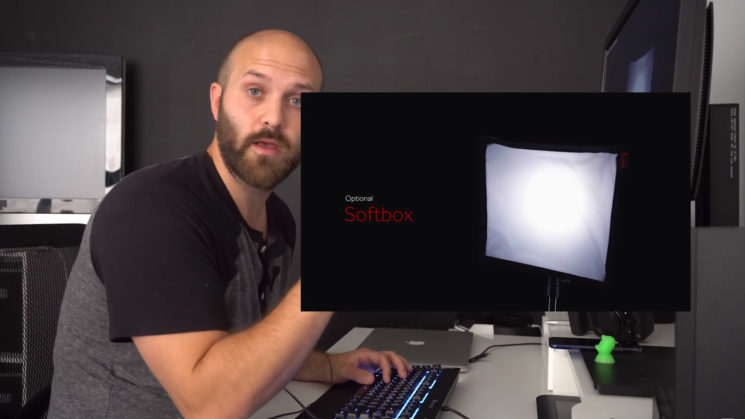 The modifiers was something else that Rob also brought up. It’s great that there are modifiers available, but being a non-standard form factor, you can’t just throw these things into your regular softbox. Even if you could, something like this is unlikely to fill a 4ft octabox. Even the proprietary Rotolight modifiers will probably eat at least a stop of light out of the already low output.

Rotolight response : We’ve just done an entire shoot where just one NEO 2 was used at 15ft to the model with a soft box with 1.5stop diffuser on it, in continuous mode at only 55% brightness, and it works perfectly!

Rob goes a little more in depth into the power output, from the specifications listed on the Rotolight Neo website. The specs I saw showed f/8 at ISO200 with the light 3ft from your subject. At 9ft from your subject, you’re losing around 3 stops of light.

Rotolight response : NEO 2 is a modern light, designed for modern cameras. It is not necessary with the quality and low light performance of modern cameras to shoot at ISO 100 or 200 (which you focus on in the video). NEO provides a very useable amount of light output specifically at 3ft ISO 800 F16, or ISO 400 F11.0, which is plenty! At 6ft NEO also produces a significant F8.0 at ISO 800 and F5.6 at ISO 400. 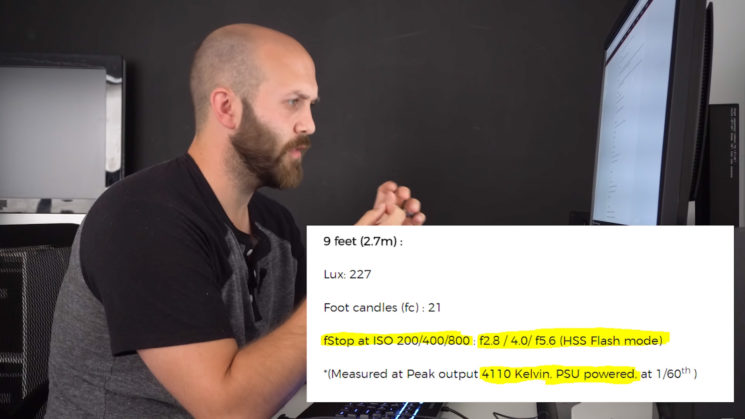 I don’t know about you, but for me, if the light levels are so low that an f/1.4 flash can do the job, I’m not going to be shooting high speed sync anyway. People typically use high speed sync because they need fast shutter speeds to overcome the ambient light. And if that’s what you’re trying to do, you’re going to need a much more powerful light than this.

As Rob had been asked about how this compares to something like the Godox AD200, Rob did the maths. There’s at least about a 5 stop difference between the Neo 2 on AA batteries at daylight temperatures vs the AD200. That means, in order to get the same kind of power out of the Neo 2 that you get from the AD200, you’d need about 32 of them. So, according to the published specs, you’d need to spend close to $13,000 on Neo 2s to get the same power output as the $299 Godox AD200. 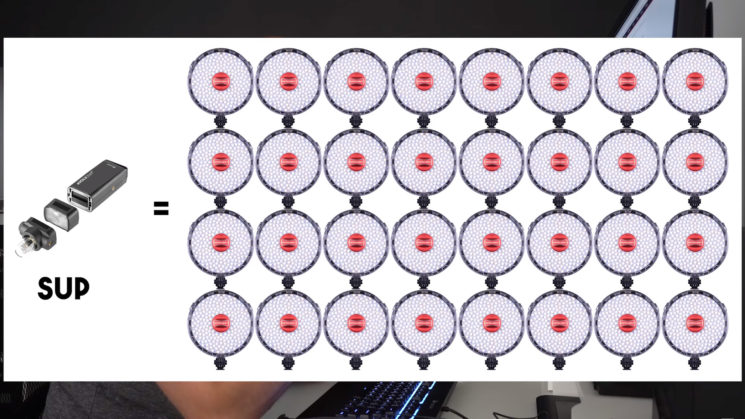 Rotolight response : We are not saying NEO 2 will replace a speedlite in every situation, indeed in bright un-diffused sun it will probably not be the light for you, but in all other situations having a colour adjustable, HSS flash which can also be used for video with integrated Elinchrom skyport wireless triggering at 656 ft, provides massive benefits.

As Rob says at the end of the video, the light does have a few cool features for videographers. .

While I agree it does have a few neat features, I do wonder if they’re mostly just gimmicks that few videographers will ever really use often enough to justify the cost. Especially when companies like Aputure have more powerful lights available at a lower cost. If you’re interested in the Rotolight neo 2, though, you can pre-order now, and shipping begins in October.

Editor note: So, it seems that this light may be quite a bit more powerful than the on-paper specs would suggest. With clarification from Rotolight, I’m actually now looking forward to trying one of these at some point myself, now, to see how it stands up. But it just goes to show that you can’t always rely on just spec sheets to give an accurate representation of a product.

Update 19th Jan, 2018: Rob now has his hands on a Rotolight Neo2, and has posted a complete review.

« Google is killing off Google Drive in March – Are you prepared?
How to give your subjects a total hair makeover in Photoshop »