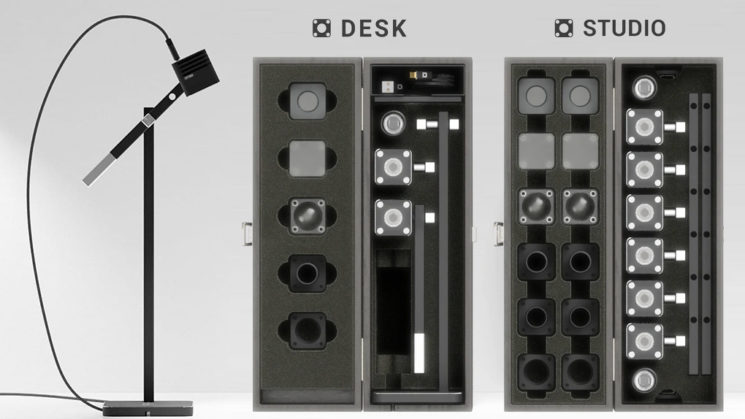 Relio first launched in 2015 via Kickstarter. It was one of the first tiny lights on the market and came in a variety of preset white balances with a moderately high CRI plus various colour options. In 2018, it was updated to Relio², with higher CRI and more configuration options for working with multiple lights. Now, they’ve taken it a step further with Relio² 2020 Edition.

Once again, Relio has taken to Kickstarter to fund the project, and it’s over 1,150% funded. It doesn’t have long left to go, though, only a few hours, if you wanted to jump in on it yourself. They promise more portability, practicality and accessories – albeit 3D printed. Which is a little disappointing given the price they’re asking.

The new “2020 Edition” essentially brings two “Desktop” and “Studio” collections, including various accessories and modifiers. The accessories will work with both kits, although what’s included isn’t the same in both.

The lights themselves are small cube lights, similar to those from the likes of Litra and Lume Cube, although I suspect not quite as powerful. They have a high CRI/TLCI, flicker-free with Bluetooth+DMX control, and the accessories are open-source, downloadable, and 3D printable.

Each comes in its own case, with the Desktop Edition containing up to two Relio² LED lights, a pedestal stand, USB power cord and starts at €219 for a single light kit. There’s also space for a universal battery pack and wall charger – although those aren’t included. It’s aimed more towards general LED light users rather than photographers or filmmakers, not that it can’t satisfy those with basic needs.

The Studio Edition, though, is where filmmakers and photographers start to see some real benefit – although it’ll cost you €999 for the six-light kit. This comes with up to six Relio² LED lights, available in tungsten, natural and daylight colour temperature with up to 98.5 TLCI. It also includes a “Six-Pack” NP-F adapter which lets you charge or power up to six LED lights from a single Sony NP-F style battery simultaneously.

What’s particularly interesting about the latest revision though are the modifiers and accessories. The modifiers are, as the trend seems to have become lately, magnetic. Nothing really new there, but what makes them a little different is that they’re 3D printed. Which I wouldn’t expect for this price, to be honest.

A six-pack of lights with 3D printed modifiers and accessories, cross-polarising filters, lenses, USB cables and a Six-Pack NP-F adapter all boxed up is €999. That seems quite excessive when you consider you can pick up half a dozen Litra Torch 2.0 for about half that cost, leaving you with around $500 to buy a 3D printer (more than plenty these days) to design and print your own modifiers.

I’m also not entirely convinced that 3D printed diffusers aren’t going to have a detrimental effect on the colour accuracy of the light coming out of these little LEDs. Not to mention that if they’re not melting a 3D printed modifier, the LEDs themselves probably aren’t very powerful in comparison to the other small cube LED lights on the market – which tend to get quite toasty after being in use for a while.

They say that the accessories in the campaign are printed from PLA, which has probably the lowest glass transition temperature of just about any material you’d ever use on a home 3D printer at 60°C. If they advised printing them in PETG or ABS, I’d have a little more confidence in the power of the lights. But still, colour accuracy. 3D printer filament manufacturers usually aren’t too concerned with that sort of thing.

For €999, I’d really expect proper, finished, injection moulded parts, personally. Especially when Relio has already open-sourced the 3D printable models so that you can print or modify your own anyway.

But, it may just be that I’m not the ideal customer for this product. Perhaps you are. If you are, head on over to the Kickstarter campaign to find out more.