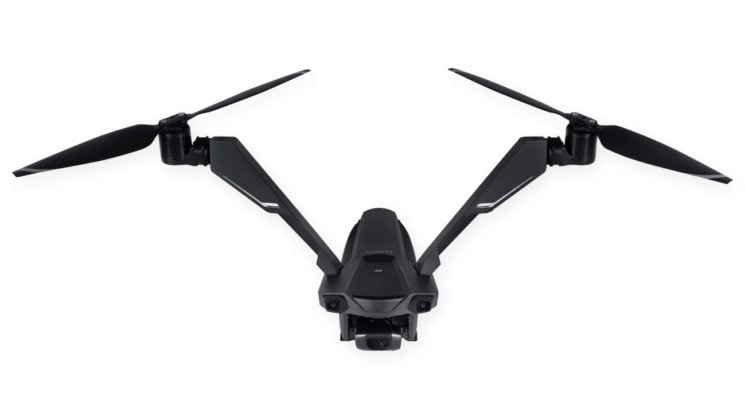 Zero Zero Robotics, creators of Hover2 – “The Drone that Flies Itself” (and the original Hover), has just announced their new V-Coptr Falcon. It’s a bi-copter drone (2 arms, 2 propellers) which offers up to an amazing 50 minutes of flight time on a single battery charge. It’s a very unique design, inspired by the Boeing V-22 Osprey military aircraft. It’s compact, foldable, and they’re claiming it as the “world’s first” v-shaped drone with only 2 propellers.

Other than the flight time, it seems quite similar in spec to something like the DJI Mavic Pro Platinum. They both have a 12-megapixel 1/2.3″ CMOS sensor, a similar field of view, they both shoot JPG or DNG raw stills and 4K UHD video at up to 30fps, although the V-Coptr Falcon just pips it at 1080p HD going up to 120fps vs the Mavic Pro Platinum’s 96fps.

The two things that set this apart from the Mavic Pro Platinum, though are the pretty crazy looking design and the huge flight time. How well the design of the V-Coptr flies compared to something like the Mavic Pro in actual use, though, is something we’ll only know once it gets into the hands of users and we start to see some real-world feedback.

As for the flight time, Zero Zero Robotics says that’s down to a more efficient and aerodynamic propeller design which allows the motors to get more power while spinning more slowly, creating a lower drain on the batteries.

If it does what it says on the tin, it should be rather an impressive drone, and with 50 minutes time in the air vs the competition should drastically cut down on the number of spare batteries you’ll need to buy to cover a day’s filming.

The V-Coptr Falcon is currently available to pre-order for $999 with a $100 deposit and the rest payable when it ships at some point in February. Find out more on the Zero Zero Robotics website.

« This is what a CFast 2.0 card looks like on the inside
Relio² 2020 Edition comes with more portability, practicality and accessories »