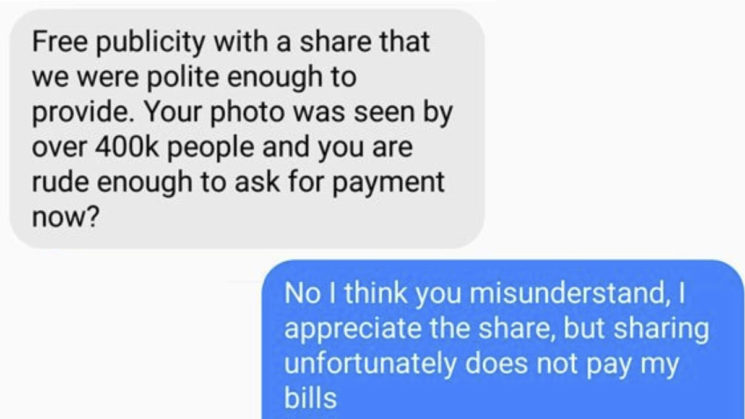 Copyright infringement is all too common these days. It seems especially so in the music industry. One would think that fellow creatives, like musicians, would understand copyright and know better. But it turns out that they often don’t. Typically, when the photographer contacts them about it, the ensuing conversation is quite amicable. The images are taken down, or credited, and occasionally a fee is paid.

In this instance, however, not so much. When concert photographer Adrienne Row-Smith recently discovered some of her photos were being used by the band and its record label, she reached out. And while the band were being quite pleasant about the whole situation, their record label most certainly was not. DIYP reached out to Adrienne to find out more.

Adrienne had been shooting the concert for an article on the MonkeyGoose Magazine magazine. We asked Adrienne how she first discovered that her images had been used outside of this article without her permission…

When I go to post images on my social media, I spend a lot of time looking up who the artist is, and whom exactly I’ve got in the photo. From there, I make sure to tag them in it, not only so that the artist will see the image but so that my followers and potential followers can see my work.

In this case, when I went searching for their social media tags I found that 2 of my images had been downloaded from the article. The images themselves appeared to have had a black and white filter put over them, and the exposure increased so that the image looked blown out.

Furthermore, my watermark was partially visible, but it was very clear that they had intended to crop it out (which is why I use such a large watermark, as it makes it more difficult).

For some photographers, seeing your work posted elsewhere without your permission is like a punch to the gut. But Adrienne was not surprised that this had happened. What did surprise her, though, was how hard she had to study the images to confirm that they were indeed hers.

When I saw it, I wasn’t surprised that the photo had been taken. Social media is a tricky world to navigate, and I find that at this point you either have to just ask for credit when the photo isn’t tampered with or you don’t post at all. However, this was one of the first times that I had to really sit down and compare the images because it had been edited to the point that I almost did not recognize my own photo.

This was where Adrienne followed her usual protocol in such instances and attempted to contact the band. She described for us the series of events that happened next.

Generally, when I find my photo reposted and I have to get it taken down, I try to be nice about the whole affair simply because a lot of people (even though they should be aware) are not knowledgeable about the law regarding copyright. So, I reached out to them and explained the situation and how this is not a problem for my brand but also an illegal thing to have done.

Whomever I was talking to initially was understanding and was willing to have a conversation about it and said that they would work on getting the photos taken down.

I also stated that if they wanted high res copies I was more than happy to sell them to them, but they could also wait and share the ones I posted (by using repost or sharing on Facebook). When they asked how much I would give them for the high-resolution copies, I told them my price for per photo and that was the last interaction I had with them.

Usually, even if there’s no more contact, this is where one sees that their images have been removed from the offending social media platforms. In this instance, though, they were still up, and this is where things turned nasty. Adrienne told DIYP…

After seeing that they hadn’t removed the photos, I gave them a final notice to remove or I would be escalating the situation. That’s when I was sent those unpleasant messages by the record label owner.

Adrienne has allowed DIYP to post the screenshots of the conversation, with the names obscured. 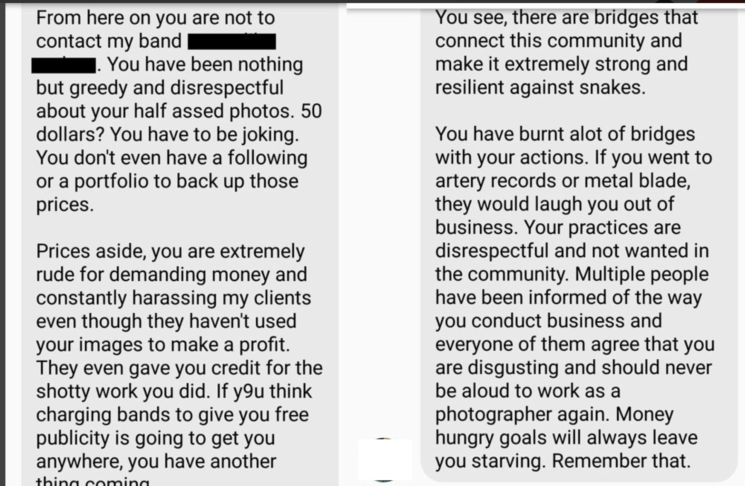 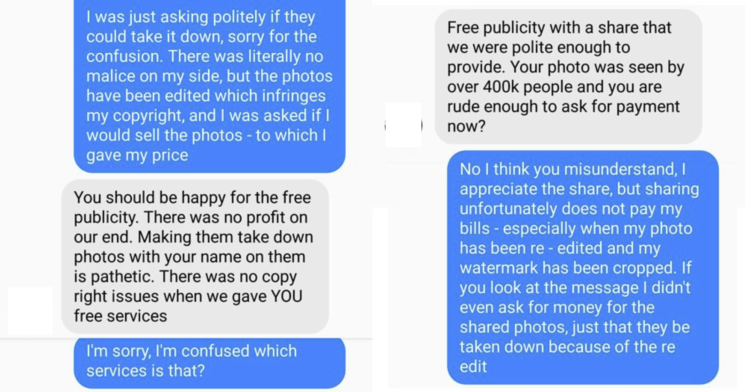 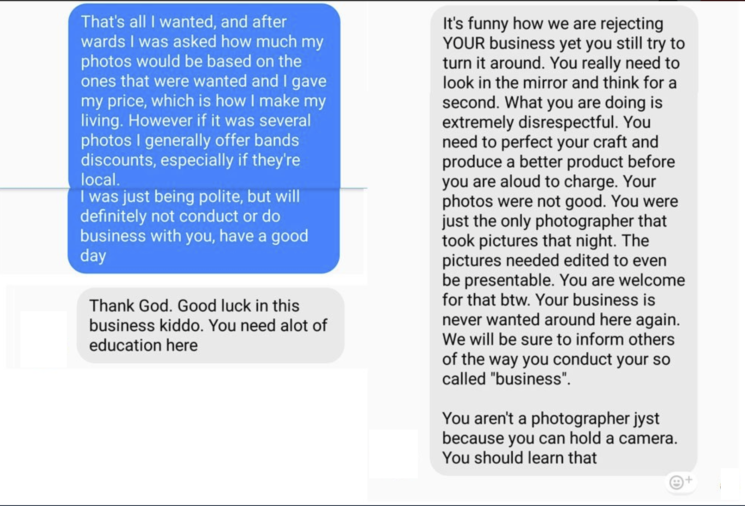 Somehow, they seemed to think that by stealing Adrienne’s work and then reposting it to 400K followers without telling them who created it, they were doing her a favour. Obviously, for anybody else looking in on this situation from the outside, that was not the case.

While such infringements are sadly quite commonplace these days, they do seem to be most prevalent in the music industry. One example of this was The Red Jumpsuit Apparatus, who clearly don’t understand how copyright works. Even huge names like Motley Crue aren’t immune to a little copyright infringement (even if it was their employees who did it, they’re ultimately responsible).

Given the backlash against apps like Napster, back in the day, one would think the music industry would not only understand copyright law by now but also know exactly how it feels to have your hard work ripped off.

I don’t think I would’ve kept my cool as Adrienne did in her responses to this record label. Obviously, this is not the way she expected them to respond, nor is it the way copyright infringers should respond when contacted about such matters. But it’s a calm reminder to keep our heads when conversations take a turn like this.

Adrienne offers some advice to other companies who find themselves in similar situations.

First, I am going to be honest and say that if you’re looking to photography to promote your business in any form you should know the law. You probably should not be running a business if you think its inconvenient or not worth your time to pay people for their work.

That being said, if a photographer reaches out to you for stealing their work apologize and pay them, or if they merely ask for it to be taken down do so. Do not try to argue with them, do not be mean to them.

Photographers put a lot of time and effort into creating, editing, posting and cultivating their work, so if you really like the work then just pay for it.

To their credit, most infringers don’t realise they’ve even done anything wrong, so they often respond respectfully. There’s a lot of misinformation out there on the web when it comes to copyright. People often believe that if they’re not profiting from the image (ie, selling products that include it) and they provide a credit, that that constitutes permission. In reality, it does not. But they don’t learn this until they’re told this by the photographer upon whom they’ve infringed.

And even if this was how copyright worked, which it isn’t, they are still profiting from the image. They post images like these for marketing purposes. Marketing sells albums, downloads, concert tickets and merchandise. That’s profiting. Even though it’s a moot point, it shows just how silly their reasoning can sometimes get.

We also asked Adrienne what advice she would offer to photographers who find themselves in such a situation.

To other photographers, I know I sounded like a bit of a pushover, but when you see your work being reposted or used to promote a brand, say something about it. Get yourself involved with a lawyer or firm that is willing to fight for you and your work.

Furthermore, if you’re thinking of becoming a photographer make sure you know your rights and to be willing to fight for them

So, if you find yourself in a similar situation as a photographer, remember to be like Adrienne. Keep a cool head when you respond. Don’t outwardly show anger or hostility toward them, even if you’re raging inside. Because if something does go to court, they’ll only use that against you. Remain calm, collected and professional, no matter how belligerent the other side of the conversation becomes.

Adrienne has asked that the band and record label not be “named and shamed” in this post so their names have been obscured. If we see anybody calling them out in the comments, those comments will be deleted.

The point of this post is to help educate. To educate would-be copyright infringers, as well as to help photographers figure out how they should respond to them.

I want to thank all those who have reached out in support or to give advice. I really appreciate the feedback and interest in this. I just hope that this will help educate and help to stop this trend.

Thank you, Adrienne, for taking the time to chat with us.

If you want to see some of Adrienne’s work, head on over to her Instagram. And, of course, you can see it illustrating some of the articles over at MonkeyGoose Magazine.

« “Filmmakers” stole woman’s video, made fake interview with her – and won an award for it
This ‘one in a trillion shot’ is the perfect representation of the food chain »