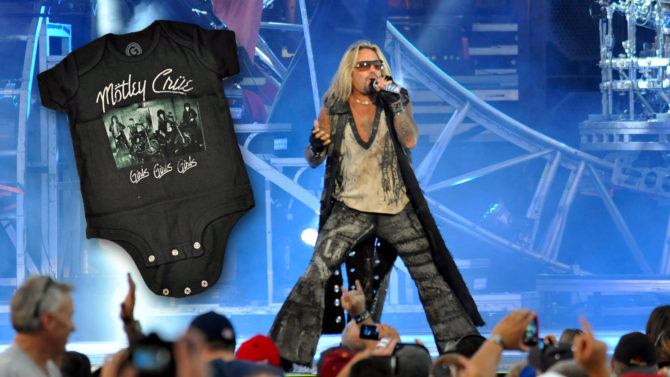 Recently retired Mötley Crüe are being sued by legendary rock photographers Barry Levine and Neil Zlozower. Their work was slapped on all kinds of merchandise including stickers, flags, and even baby onesies. Their claim is that the band did not have the rights to use images that were on merchandise being sold during their farewell tour.

Blabbermouth reports that the lawsuit was filed on Tuesday (September 6th) in the U.S. District Court for the Southern District of New York. In it, Motley Crue, Inc are named along with 23 other defendants including Amazon (where allegedly infringing products were sold) along with a number of clothing, poster and other merchandise manufacturers.

Levine and Zlozower produce some of the most iconic imagery of the band. Specifically, Levine shot the album cover for Shout At the Devil. Zlozower photographed the amazing “Blood Session“. 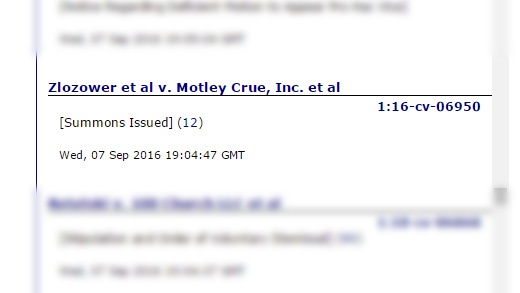 Which seems reasonable enough. The band wanted to shoot some album covers, so they hired photographers. Crue were at the height of their career, so naturally they wanted the best. The photographers did their job, presumably were well paid for the commercial licenses to use them as album covers and everything was right with the world. Fast forward 30 years.

In January 2014, MÖTLEY announced that they will be touring for the very last time before their retirement during their Final Tour. The Final Tour started on July 2, 2014 and ended on December 31, 2015.

On the information and belief, The Final Tour consisted of one-hundred and thirty concerts around the United States, sixteen shows in Europe, five shows in Asia, six shows in Australia region, and one in South America.

The group then disbanded after their final concert of the tour. Despite the group no longer being together they now face a Copyright lawsuit. They claim that their permission was neither asked for, nor granted, for the use of their images in the Final Tour.

Upon information and belief, in 2014, Motley, Motley Touring, Global Inc., Global Ltd., Live Worldwide, Live Concerts, Live Entertainment, and Live Merchandise copied the Zlozower Photographs and Levine Photographs and placed them on merchandise to sell to the public.

Upon information and belief, the merchandise was sold on their websites, at concert venues, and third-party merchandise websites.

Levine and Zlozower are seeking profits from the sale of mercandise featuring their photographs, as well as damages and attorney’s fees.

Chances are, the band themselves had no idea what was going on. Many issues in the past, especially with the photographers, has been attributed to their “f**ked up management company“. It does sound like the original version of “the web guy did it”, but it will be interesting to see who’s ultimately responsible if this goes through.

It may be turn out that there’s wording in the original license that covers this. After all, album covers appearing on T-merchandise certainly isn’t uncommon, and it definitely wasn’t in the 80s. But the original license may be more limited than the band were led to believe.

The band itself may be gone, but they’re certainly not forgotten and still have a legion of fans out there (myself included), but what do you think? If true, who’s responsible? The band or the management dealing with merchandise? Do you think it’s unusual that such a license wouldn’t include merchandise for the cover of one of Crue’s most popular albums? Let us know in the comments.

« In August, the Netherlands turns purple and this is what it looks like
This is what the digital display on the upcoming EF 70-300 F/4-5.6 IS II may look like »