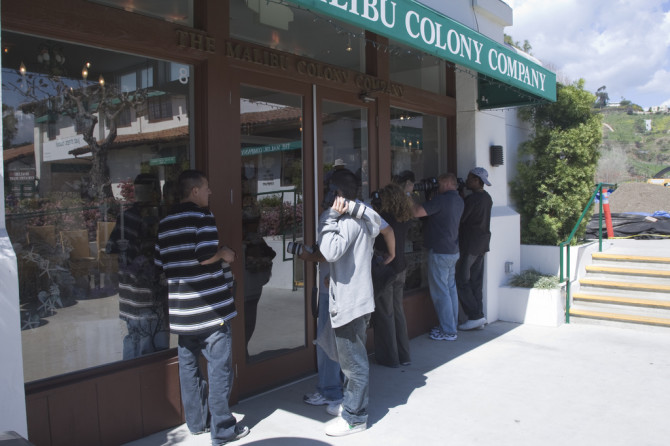 We’ve done reports over stories that we hear of how people have been treated by police when practicing photography in public. Most of the time they’re journalists, bystanders, or someone trying to expose police in acts they probably shouldn’t be committing in the first place. And we’ve always treated the subject with importance because photography isn’t a crime. A state isn’t truly free if it isn’t a state that builds on a right to a freedom of speech, and photography is one method of that freedom of speech. But what about when photography itself is used in an abusive manner? Like the case just a few weeks back involving the subway guy from Massachusetts? Photographers should never be punished for taking pictures in public, but that statement itself comes with responsibilities on the photographers themselves. I want to focus a bit on something that really blurs the line between what’s appropriate and what isn’t: paparazzi photography.

This post comes after recent news of Kanye West settling a case involving an incident last July in where he assaulted a photographer as he was trying to leave the LAX airport. Before you pick up your pitchforks at me bringing him up, understand why I decided to bring him up. Out of any of the many celebrities that are mobbed today by paparazzi, Kanye West is arguably the most controversial through how may times his impulsive actions have become headlines for paparazzi on TMZ.

In today’s world, the job for a paparazzi is easier. We have smaller, easier-to-use cameras, and we have the ability to share our shots literally minutes after they get taken. In today’s culture (at least for the West), celebrities’ lives have the tendency to be under even more constant of a spotlight. And because of how much people today love finding YouTube videos of two guys getting into a fight, and how excited we get whenever something controversial happens, it’s become an unfortunate trend for paparazzi to try provoking their subjects. Think about how easily aggravated police typically come off as on amateur videos we see of them, or think of how an average person will usually always react with hostility if he or she realizes they’re being photographed. Now put a celebrity, someone who deals with flashes in their face every day, and imagine how easy it is for them to crack the same way.

That’s pretty much why Kanye is where he is right now in the eyes of paparazzi. The more videos of him that appear, the more paparazzi that start coming after him in hopes of a good paycheck. He’s become an easy target. Even normal citizens have realized the worth of an amateur paparazzi video and what it can do: an 18 year old kid recently got paid more than $250,000 in a settlement with the rapper after he was punched by him a few months back. The reason he was punched in the first place was because of the insults he started yelling at Kanye’s wife while paparazzi were swarming around her, with the phrase “N***er-lover” being used. The kid literally got college and half his future debts paid off because of yelling a racist slur at a man’s wife and getting hit for it.

When we look at stories like this from a psychological perspective, it’s apparent that there’s something incredibly wrong here. Paparazzi photography is used for a paycheck, and then those same videos are used to incriminate subjects right away if they react in a violent manner, like a normal human being likely would. It’s a problem because it’s a form of hypocrisy: these photographers hide behind the argument that photography is not a crime, and then take away the freedoms of others through mere provocation. This is what sets apart the difference between photography and aggressive photography. One isn’t a crime, but the other may as well be. Photographers need to understand that they should capture what they see, but they should never interfere with what they’re shooting in the first place. In the case of paparazzi, those who do their job in the wrong way shouldn’t be an example of paparazzi who do their job in a respectful manner.

For those of us who are able to photograph freely in public, we’re already incredibly lucky to be able to do so. There’s places out there that absolutely condemn speech like that. And that’s why it’s important to remember that while we defend photography as something that is not meant to be a crime, we practice that photography as respectfully and responsibly as we can. Otherwise, those rights can just as well be taken away.