If you’ve been following news on the Sigma 50mm Art lens, then you already know how exciting things are looking for it by now. Today might just be what quenches our thirst for more information on the lens until its actual release date: Sigma Bielorussia just posted up the price tag for the lens at an incredibly low amount of $790.

And I don’t know if I can even stress how low of a price that is; keep in mind that this is the same lens Sigma is aiming against Zeiss’s $4,000 55mm Otus. Right at the beginning when the company announced what their intended competition was, expectations for this lens were higher than any lens of its kind should be that long before its release date. Obviously it got taken as more talk for hype by many of us, and then the actual tests started appearing online. The new Sigma was put up against three other lenses including that Zeiss, and it came out on top in every test the lenses went through. 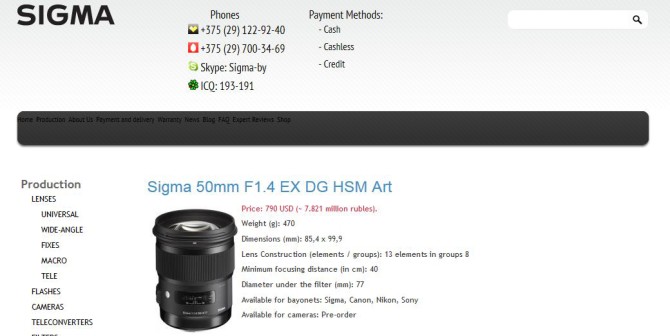 What’s just a test right now will eventually be put to application in real life, come May when the Sigma 50mm f/1.4 Art lens is expected to hit stores. But if what we saw in those tests is any indication of how this lens actually performs, then this is going to be a game changer. And while Sigma’s always been known for providing quality glass on a budget, they may very well soon become the standard instead. Expect updates on this post as soon as more information becomes available on the product and its availability. Until then, drop by and let us know what you think about this! With all the news on Nikon and light leaks, it’s nice to hear something that’s genuinely exciting right now.

« Photographer Creates Surreal Photos Of Homeless Dogs, Helps Them Find A New Home
With Photography Comes Responsibility: Why Recent Paparazzi Activities Are Dangerous for Photographers and Their Rights »