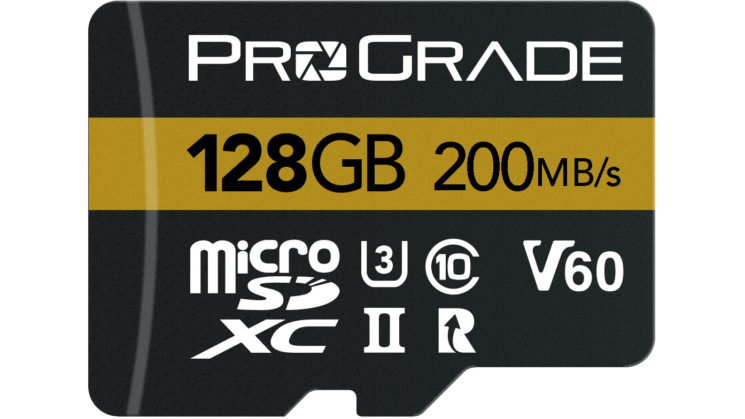 ProGrade Digital certainly seems to have settled into the swing of things nicely since their launch earlier in the year. Initially starting up with a range of CFast 2.0 UHS-II V60 SD cards, and a dual format card reader, they quickly expanded out into UHS-II V90 SD and the next major high-end format; CFexpress.

ProGrade Digital is pleased to announce expansion of our professional line to include a range of V60, UHS II microSDXC cards. With this announcement, ProGrade Digital becomes one of the only companies to offer a microSDXC with a certified video speed class rating of V60.

The new ProGrade microSD card will become available in three different capacities of 32GB, 64GB and 128GB for $49.99, $74.99 and $114.99 respectively when purchased individually. Each card includes a full-size UHS-II SD adapter. ProGrade says they will be available in single and “multi-pack” quantities, but they don’t say how many constitutes “multi”. A six pack would be handy for 360 shooters with multi-slot rigs.

Along with the new cards comes two new card readers. The first is a dual SD & CompactFlash card reader while the other is dual microSD. Both card readers are Type-C USB 3.1 Gen 2 capable of handling transfer speeds up to 1.25GB/sec. And they support concurrent maximum speed from both slots.

As with their previous dual CFast/SD card reader, they’re backwards compatible with USB 3.0 hosts, have the same 70.8 x 70.8 x 18mm dimensions, and come with a 2-year warranty. They have a magnetic base to attach to a metal mounting plate that you can stick to your laptop, or wherever (I usually use mine at home and stick it to the side of my PC case).

The new ProGrade Digital microSD cards and the two new card readers will be available some time during Q4 2018.

« Female photographers, you can now apply for Sony’s Alpha Female Program. And it’s free
Leica catches up with the rest of the world – adds smartphone control »