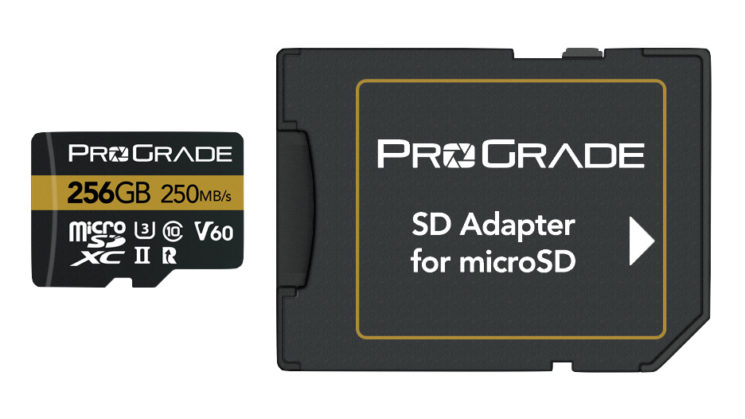 There aren’t many companies out there making UHS-II microSD cards, as there are virtually no cameras out there that can fully support them yet (still). One of the companies that does make them, though, is ProGrade Digital. They launched their initial V60 UHS-II microSD cards back in September 2018 with read and write speeds of up to 200MB/sec and 80MB/sec respectively.

Now, ProGrade has launched new V60 UHS-II microSD cards with increased read and write speeds of 250MB/sec and 130MB/sec respectively. As well as speeding up the cards, a new higher capacity 256GB version will be available. Oh, and they’ve cut the prices virtually in half.

Although the V60 specification only requires a minimum sustained write speed of 60MB/sec, the cards are capable of reaching peak speeds much higher. The original card’s 80MB/sec peak write speed has been bumped up to 130MB/sec in the new version. Of course, there aren’t really many devices out there that take advantage of these types of speeds with microSD cards (unless you pop them into a UHS-II SD card adapter and use them in UHS-II SD devices) except for UHS-II microSD card readers.

The read speed bump from 200MB/sec to 250MB/sec means that even on a full 256GB card, you’ll be able to pull off that data much more quickly than before. At least 25% more quickly than with the old ProGrade microSD cards. So, even if the cameras you’re using don’t need UHS-II speeds, such cards do make pulling that footage off at the end of the day go much more quickly – It’s why I use ProGrade’s original microSD cards in the Insta360 ONE X and Insta360 EVO cameras.

Given the proliferation of full-sized UHS-II SD cards amongst DSLRs and mirrorless cameras over the last few years and the demands for higher bitrates in drones, action cameras and 360° cameras, I’m really quite surprised that we haven’t seen any of those appearing with UHS-II card slots yet. Just about any drone or action camera worth having shoots at least 4K now, with some going as high as 5.3K and most 360° cameras shooting 5.7K and even higher resolutions.

Of course, as mentioned, you can use the UHS-II microSD cards in the SD card adapter inside your regular camera to take full advantage of their speeds. Traditionally, this wasn’t a cost-effective way to go, but with the prices of the ProGrade’s new microSD cards, that might be about to change in a big way.

That’s a significant drop from their old cards, which were available in 64GB and 128GB capacities, priced around $60 and $105 respectively. So, make sure when you’re buying that you get the new cards!