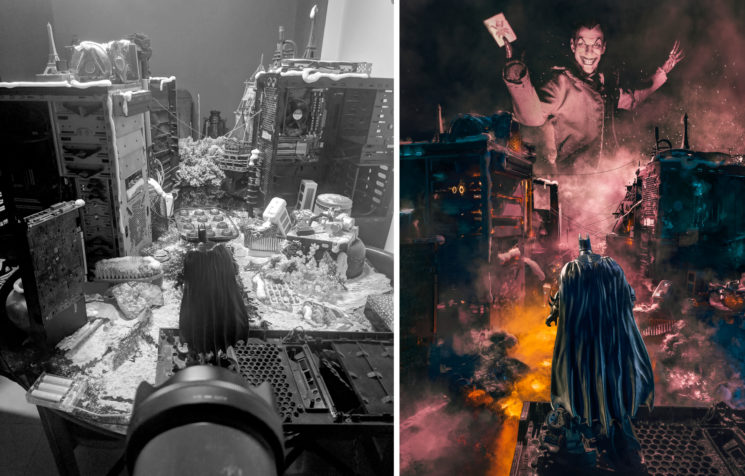 The current coronavirus situation has suddenly left many people without work and consequently with too much time on their hands. Many photographers are using this extra time creatively, and Arjun Menon is one of them. This India-based photographer combines action figures, household objects and some Photoshop magic. What he ends up with are photos that look like they came straight from the big screen.

Arjun is a professional advertising and automotive photographer based out of Mumbai, India. Like most of us, he is currently in isolation with not much paid work to do, but apparently with lots of creative energy. So, he dusted off his old action figures and started building worlds in which he photographed them. He is limited to what he already has at home, and looking at the BTS shots, I find it fascinating to see what he used. There are old computers and drone batteries, but also many kitchen items like cheese graters, oven, vegetable choppers… But I think that a muffin tin is my favorite, you’ll see in in one of the BTS shots below. 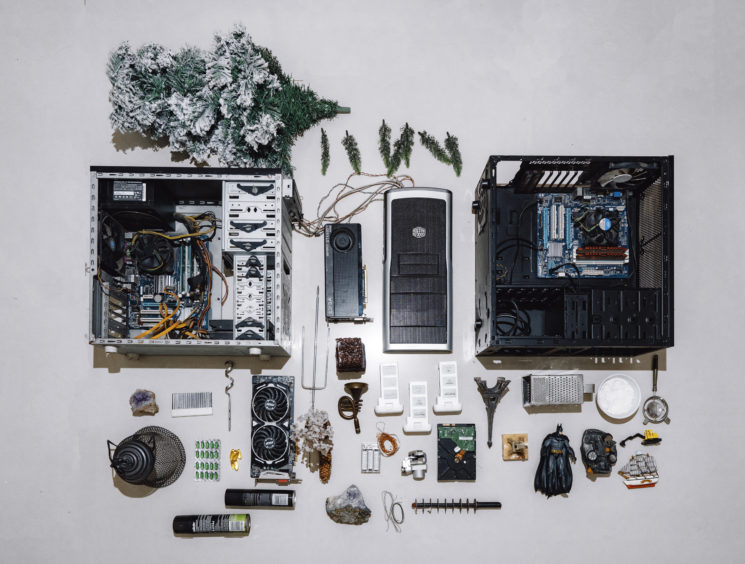 Before he starts shooting, Arjun first plans out the scene and thinks of a concept. Only then he scouts for regular household objects that would add interesting textures and fit in the scene. His main goal is to make the scenes believable, so he tries his best not to make it obvious that they’re made from toys and household stuff. “I try angles and poses that do not reveal the joints or screws of the action figure, make sure the pose fits the personality character well,” Arjun tells DIYP.

To light the scene, Arjun uses the combination of continuous lighting and flashes. He uses lots of practical effects, such as hair spray or steam iron for rain or haze effect I photograph. He tries to leave minimum work for the post, but he does add the final look to his scenes in Photoshop, and some of the photos are made by compositing. Nevertheless, I think they look marvelous!

Take a look at more photos below, along with some BTS images and Arjun’s breakdown. Make sure to check out Arjun’s website for more of his work, and give him a follow on Instagram. 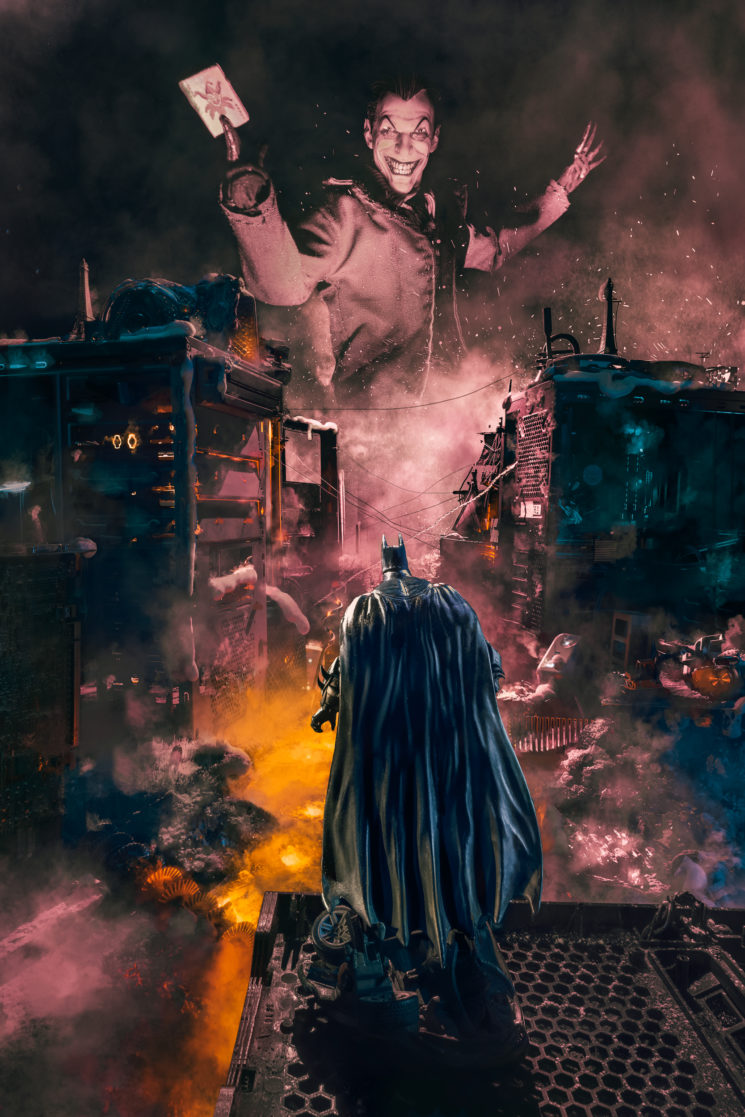 MIND GAMES ( JOKER VS BATMAN): I wanted to show a city which was torn and destroyed. This was more a bad dream of sorts for Batman so the visuals needed to reflect that. I used my old PC CPU’s a graphics cards and ton of other things as some of the details of buildings. I wanted to show Joker as a larger than life character depicted in his dream, so had to photograph him separately and combine multiple exposures for one image. This took a whole night to nail with the smoke (hair spray + Steam iron + some in post). 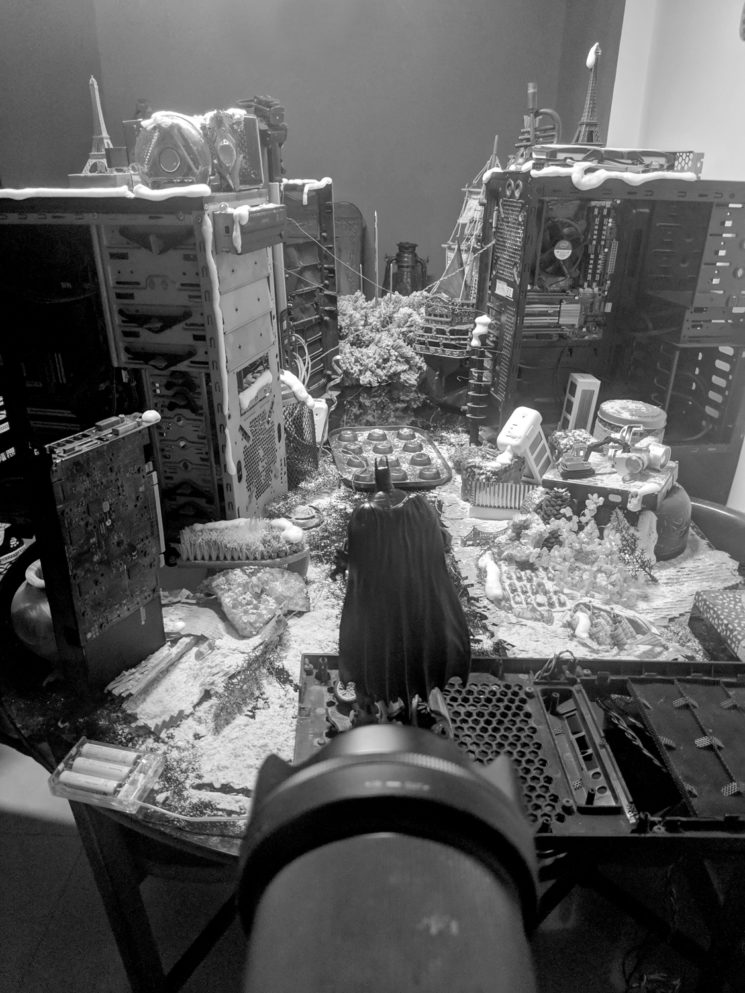 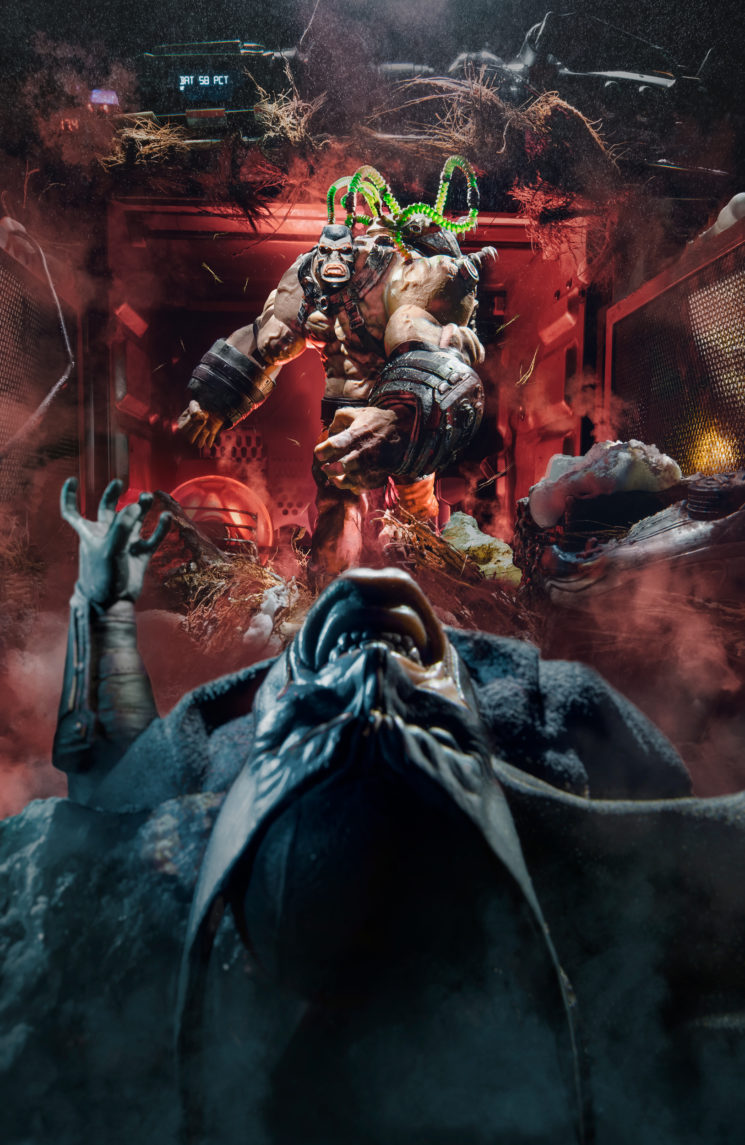 BREAKING THE BAT (BANE): In this image I wanted to show batman being thrown through the wall to the otherwise. I didn’t have a super detailed batman figure, so instead I used Wolverine 1/6 scale. Oh yes, the perspective and lighting really had to convey that this batman indeed, one thing that helped is that batman isn’t really showed with a ton of detail (Dark knight you see). This time I wanted to show some snow in the backdrop so I used a combination of shaving cream and corn flour. Again steam iron with strobe light for some of the smoke, a bit was filled in on post too. 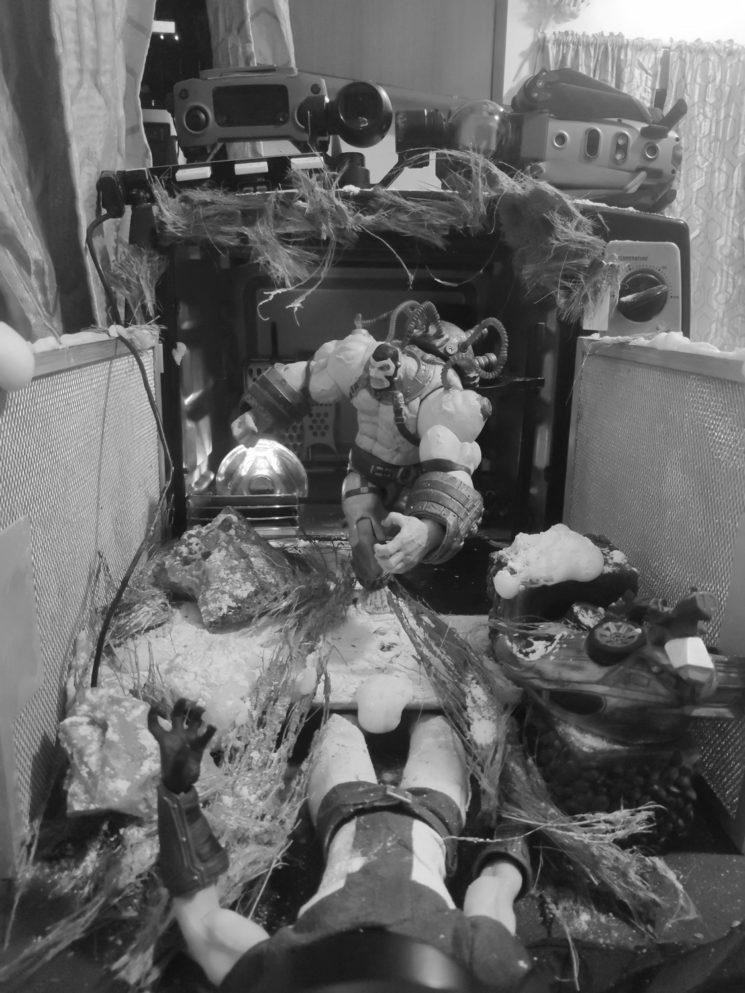 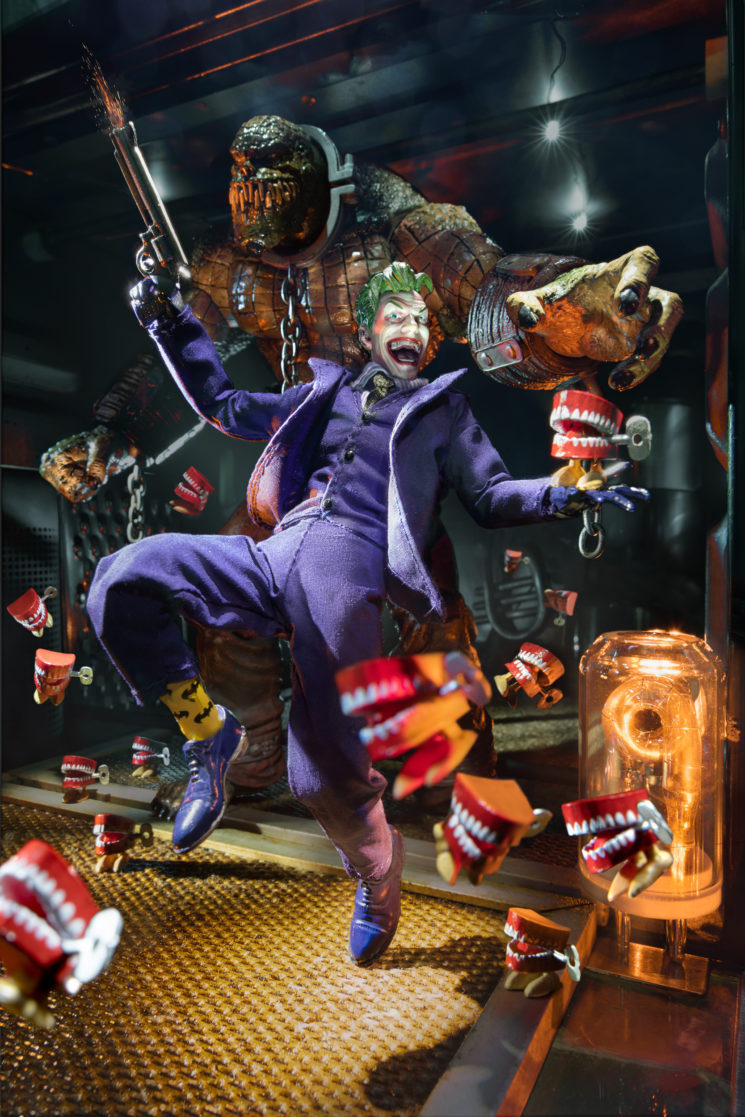 THE ESCAPE (JOKER AND KILLER CROC): These are 1/12 scale figures, this image was shot inside a baking oven. I used an AC filter for the floor, Cheese grater, old flash bulb, speaker as props on the back and sides. The backlight is a head-mount camping torch, I used a steaming iron for the haze. Stuck rice lights to the ceiling to recreate ambient light. The chattering teeth, I only had one for I shot it in different position throughout the scene and had to composite them in. 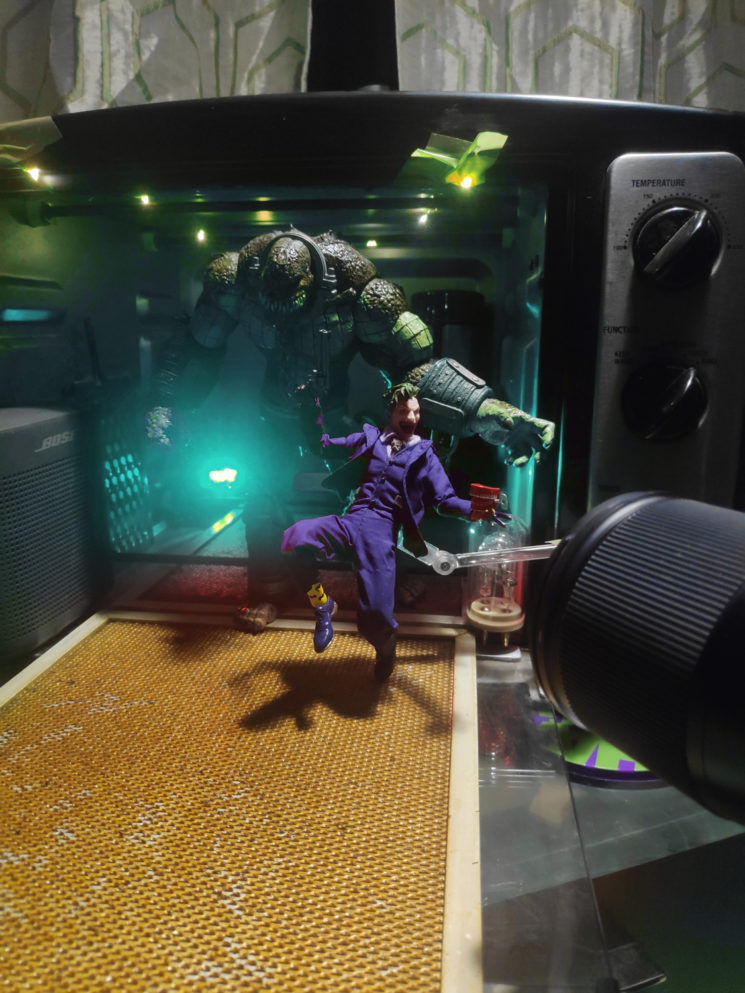 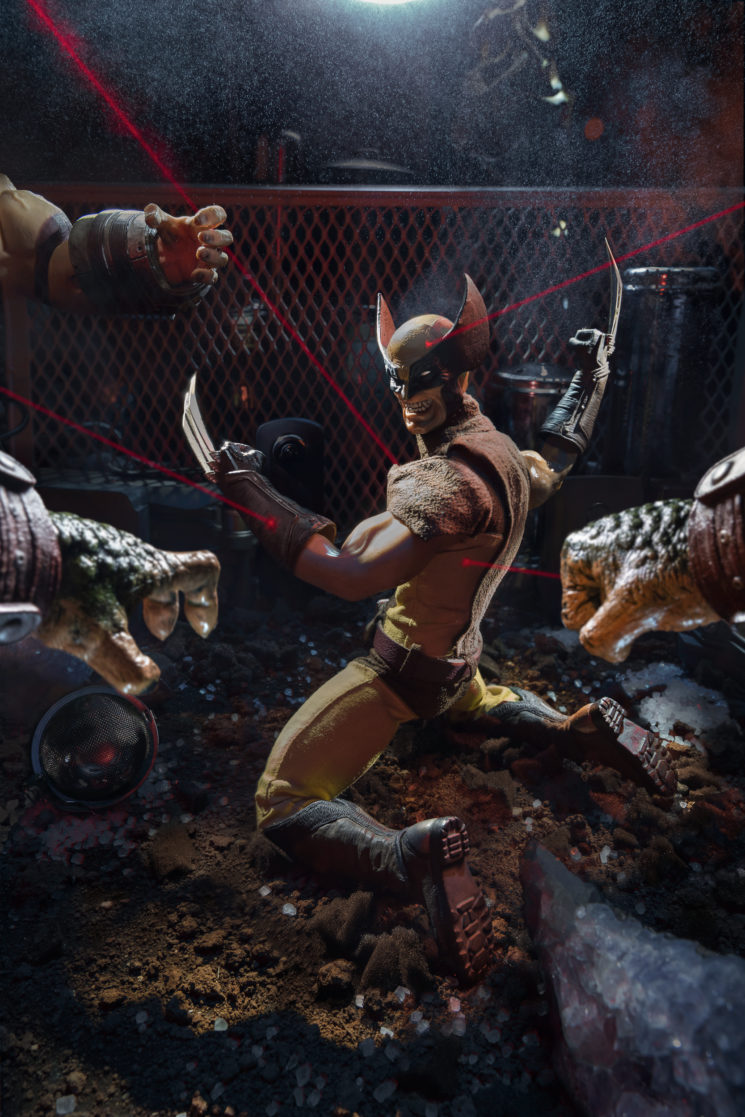 CORNERED (WOLVERINE): I have a few spare hours in a day now, so decided to put them to use. I got my trusty @sideshowcollectibles Wolverine action figure to be the protagonist this time. I came up with a concept and accordingly set a pose for him, chose a camera angle and lens. Once this is done, I try to fill the frame with some interesting objects and design a set. I got together all weird looking/ futuristic stuff from the kitchen and around the house to design a set. This includes, my drone, my 360 camera, utensils like putt maker, random decor from living room. Remember, lighting is key. I used Aloe Vera gel to apply on the figure’s hands to give them an authentic slimy look. I used hair spray for the haze/ drizzle effect and had a spare laser I had bought long ago. 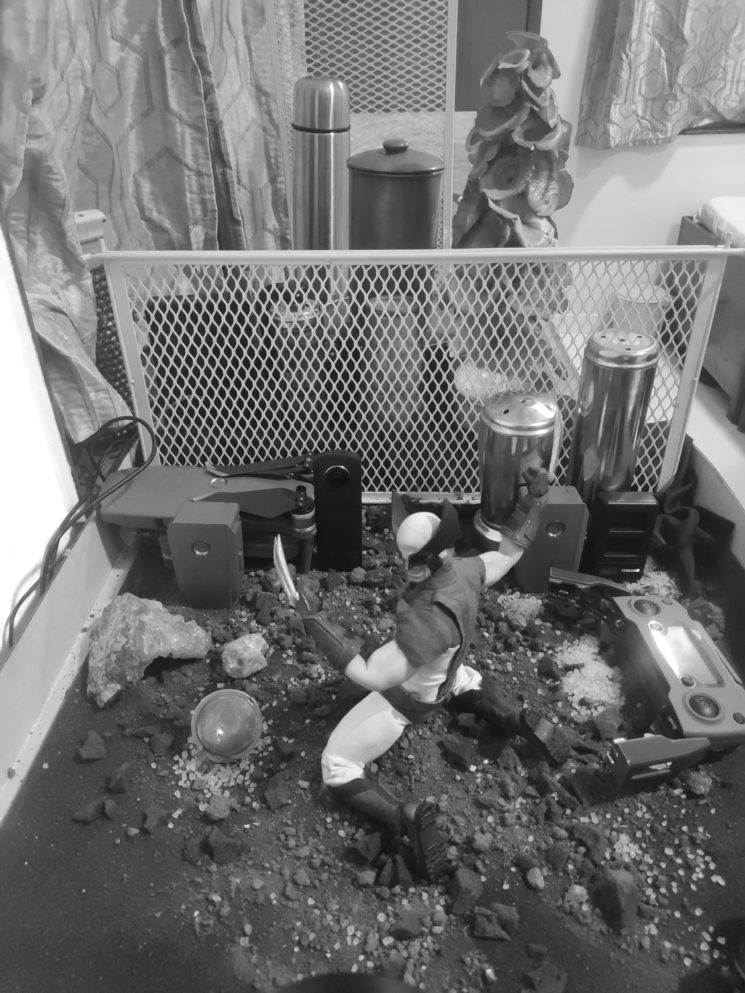 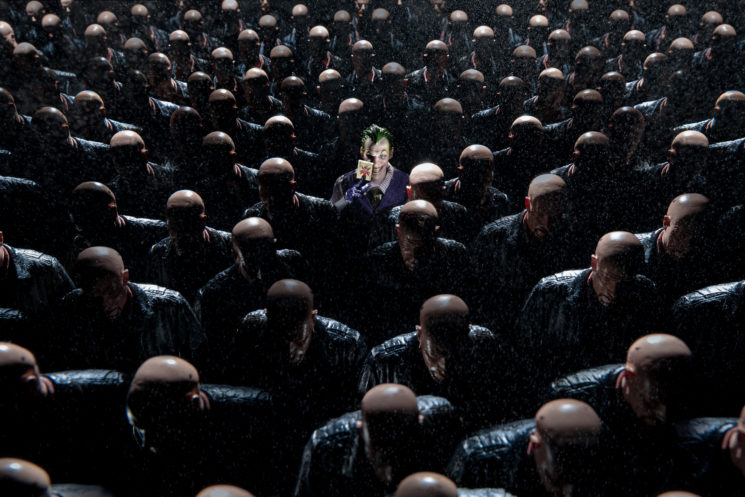 ONE OF US (Joker Inspired visual from Humble by Kendrick Lamar): I had one bald man figure (Walter white), but had to show a crowd, so I photographed it 140 times with different placements and then combined them together. (It’s actually a horizontal image, this is the cropped version). I used a hair spray with flash to get the rain effect. Used a beam torch to light up Joker. 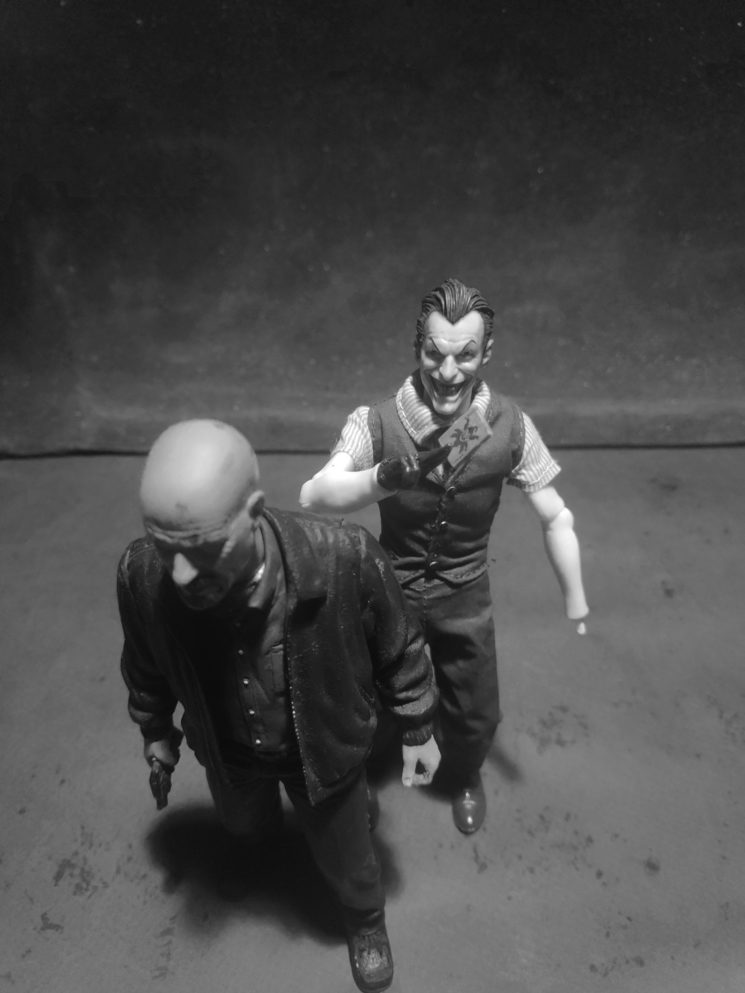