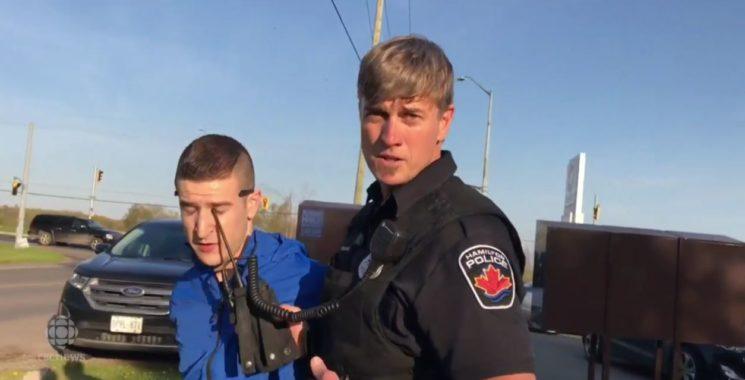 Two journalists were recently arrested this week by police at the scene of a fatal car crash in Hamilton Canada.

This hits home for me because I live in Hamilton. As a Canadian, the issue of overzealous police arresting photographers and journalists for the crime of photography always seemed like a US issue or a problem in meaner parts of the world.

To be honest, I never thought that something like this could happen in my home town.

According to Jeffrey Dvorkin, the director of the University of Toronto’s journalism program: “The fact that the police thought they could restrict them in this way is an affront to journalism and to the law,” “Clearly the journalists were not doing anything untoward.”

If Photography Is A Crime In Hamilton Canada…

Of course, the most disturbing aspect of this story is that a 10 year old girl lost her life.

However, this incident also highlights just how vulnerable all photographers and journalists are when it comes to interactions with police – especially if you’re a freelancer.

We have published many stories where photographers and journalists are threatened, assaulted and arrested by police officers and members of the public.

The fact that photography is not a crime notwithstanding, what many of these stories have in common is how quickly things can escalate from a minor confrontation to a serious incident. They also show just how important it is to have a video recording of any altercation – you can see how screwed many photographers and journalists would be if someone did not happen to record video of these events.

For now, the best that we can do is be prepared and at the slightest indication of a confrontation with police or a member of the public, pull out your phone and start recording. Then as difficult as it may be the only thing you can do is stay calm and remove yourself from the situation (if you can).

How Are Photographers and Journalist Treated by Police Where You Live?

What is the perception of photography and journalism where you live?

Do you think something like this could happen in your home town?

Have you ever been in a confrontation with police or a member of the public over photography?

How did you handle the situation? What would you recommend?