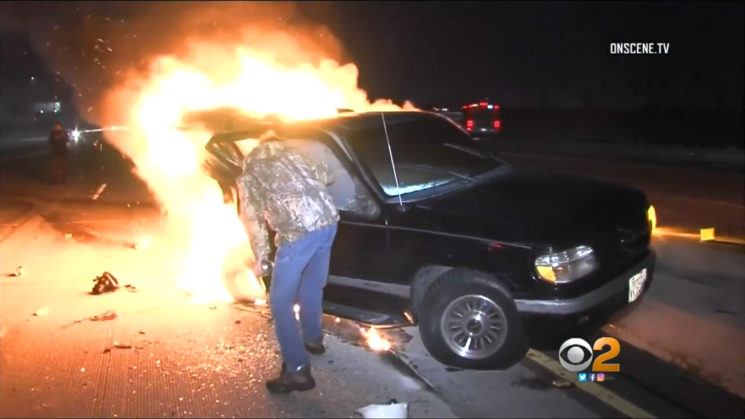 Photojournalists are used to seeing some pretty intense scenes in the course of their work. It’s not often that they choose to become part of them, though. Cameraman and owner of RMG News, Austin Raishbrook made that choice when he put down his camera to rescue a trapped and unconscious driver from a burning vehicle.

CBS reports that Raishbrook was filming n SUV that had stalled on the outside lane of a northbound California freeway. The SUV’s lights had failed after two vehicles made glancing blows as they went past, but then a third slammed into it. This caused it spin and burst into flames. Raishbrook immediately “switched over from cameraman to rescuer”.

Knowing there was little time to help before the driver would’ve died from smoke inhalation,, Raishbrook immediately dropped his camera and ran across the freeway. He smashed a window and fought through thick smoke to do what he felt he had to.

He didn’t have a chance. It’s one of the most dangerous things that can happen to you, is get stalled on the freeway at night.

The crash I got on tape was very dramatic but at that point in my mind, my mind switched to – I go to go help

He managed to remove driver’s seatbelt from his shoulder, then grab his waist, and drag him out through the window. Another video caught the unconscious driver being pulled to safety, and away from the burning car.

CBS reports that the driver was transported in critical condition to a local hospital by LAFD. He is talking and expected to be released from the hospital in a few days.

Just documenting events like this can be hard enough. To put your own life at risk and intervene to save somebody else’s is a very difficult decision that few of us will ever have to make. Austin Raishbrook is being hailed as a hero today, and I don’t disagree. Well done!

I’d like to think I would’ve responded the same way, but unless and until it happens, I don’t think anybody ever really knows for sure. But what would you have done? Have you been in a similar situation? What did you do? Let us know in the comments.