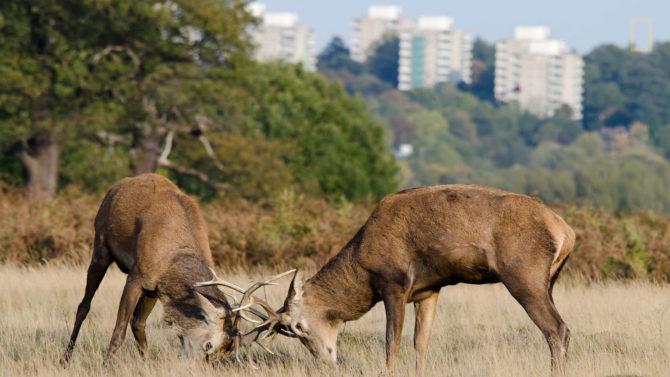 In my home town, there’s a pair of sparrowhawks that regularly nest in one of the churches in the town centre. Foxes were a regular visitor to the back garden when I was a kid. Just yesterday, I almost stepped on a hedgehog in a friend’s garden. Wildlife is all around us. Sure, we might not be seeing creatures like lions and wildebeest, but there’s still plenty for us to see.

Wildlife cameraman Bertie Gregory got his lucky break at the age of 17. After being selected as one of 20 young photographers to participate in the 2020 Vision Project, their job was to go around the UK and “prove that British wildlife is not sh*t”. He thought he’d drawn the short straw when he was assigned the “Urban Wildlife” category.

In this video from National Geographic Live, Bertie explains just how wrong he was.

Wildlife truly is all around us. As man has encroached upon natural habitats, the animals have adapted to live in our world. Peregrines are nesting in our cities, wild deer are rutting for breeding rights only 3 miles from England’s capital.

It’s the same all around the world. The species may be a little different, but wildlife is everywhere. In the middle of Bangkok, Thailand is Lumphini Park, filled with 6ft+ Water Monitors. Across many American states, alligators, snakes, lizards and mammals of all shapes and sizes litter the towns and cities. As do countless species of birds.

So, don’t think that just because you don’t live near wilderness doesn’t mean you can’t shoot wildlife photography. Some of those species that live closest to us can be the most fascinating when seen in a different light. Observing how they have adapted to live in a man-made world can be an amazing thing to see.

I saw this chap one morning on the roof of the local Aldi supermarket during DIYP’s recent trip to Photokina.

When you see the same animals regularly, you can even start to see personalities come out. They get used to you being there, they allow you to get a little closer and take the occasional liberty. Around me, swans are my most regular wildlife interactions. They’re not the subject I usually head out to shoot, but I pass them on my way to other places.

It can get to a point, though, where they become less curious about you, and are so comfortable that they just get on with their lives while you watch. This particular swan has lived near me for a few years. If he sees me coming down the path, he gets defensive. Then when I get closer and he recognises me, just carries on about his day.

What wildlife is in your town or city? Have you been out to photograph them? Has living in a town or city put you off even thinking about shooting wildlife? Having heard Bertie’s story, are you going to start? Let us know and show of some of your own urban wildlife in the comments.