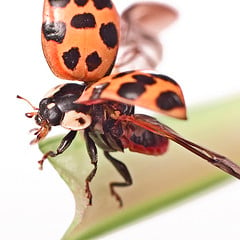 I started toying around with insect macro photography about 18 months ago. And to be honest, those first few months produced some amazingly bad photographs. But as scientists say, there is no such thing as a failed experiment – as long as it yields data. Well, I’ve managed to amass quite a lot of “data”. And I am grateful that I am able to share some of that knowledge with the DIY community.

As bad as they were, those first few macro shots opened my eyes to the amazing detail and intricacies that lay just beyond the capabilities of our vision. Watching the insects move through the viewfinder was – and still is – a fascinating experience. So, from my earliest attempts, I decided I was going to only shoot live insects.

Of course, the advantage of shooting dead insects is that they hold really still for you. The downside is that – well – they’re dead – and often, a keen observer can tell. You also miss out on watching the bugs in action – and sometimes capturing that action in stunning detail.

For starters, I’ll walk you through the gear I am shooting with and some basic technical tips, then I’ll wrap this up by sharing some ideas on working with the insects and most importantly “containment” during the shoot.

Until recently, I was shooting with a Canon 10D, but this Spring I treated myself to a “major” upgrade … a used Canon 20D bought off ebay for $325. So, it’s safe to say that just about any DSLR will be adequate for this.

For lenses, I typically shoot with one of two set ups.

Canon 50mm f/1.8 (it can be bought for about $95) mounted in front of some Kenko extension tubes. The multiplier effect gained from the extension tubes allows me to count the hairs on an ant’s head. 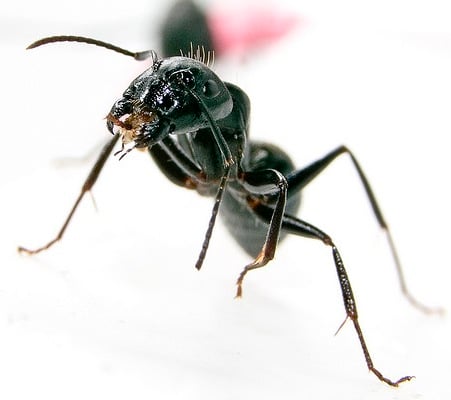 The first time I heard about this reversed lens technique, I was sure it was voodoo. But if you think about what goes on inside a lens when you mount it correctly – it takes a large scene and reduces it down to fit on the camera’s sensor. So, when you mount it backwards, the opposite is true. Tiny objects suddenly appear rather large. Add to that the multiplier effect gained from the extension tubes and suddenly, you can count the cells in a fly’s eye. 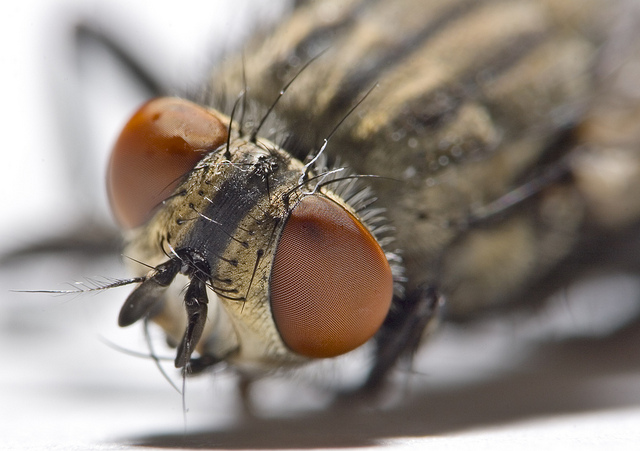 I won’t bore you with a lot of math, but basically, if you divide the focal length of the main lens by the focal length of the reversed lens that is the degree of magnification you are getting. So w/ a 50mm lens reversed in front of a 100mm lens, an object that measures 12 x 8mm will completely fill a 24 x 16 mm CMOS sensor. By stacking extension tubes between the main lens and the camera body the magnification factor is further increased. Now, go reverse mount that same 50mm lens in front of a 300 mm lens and you are bordering on the microscopic. 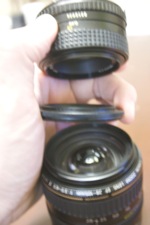 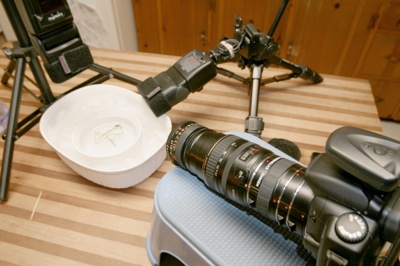 But all this magnification comes at a cost

1. Less light hits the sensor. When I add the reversed lens, I know I’ve just given up 2 stops of light. For each 20mm of extension tubes I add, I give up roughly another stop. I’ve got a couple of standard lighting setups that produce consistently good results for me, but I’ll cover those later on. For now, just know that you’re going to want to get a hold of 1-2 strobes that you can adjust manually. I use LumoPro 120s from mpex.com (the new 160s are available!) These lights cost about $125 apiece and are adjustable in 1-stop increments down to 1/32 power.

2. Depth of field. Trust me, you want to ease into this. Start with a 12m extension tube, then gradually work your way up. I am regularly working with a depth of field that is less than 1mm – even at f/29. That’s hard enough to deal with when your subject is inanimate – but live insects tend to be quite active. As a result, I have to shoot these things handheld. Now, I can already hear you saying, “Wait a minute, Scott! Everybody who writes about macro photography says you’ve got to use a sturdy tripod.” If I were shooting an inanimate object, I would absolutely agree – but when your subject is running around and you’ve got a 1mm DOF, you learn to ditch the tripod in a hurry.

3. Forget that your camera has an auto-focus feature. Extension tube manufacturers will tell you that their tubes work with your camera’s auto-focus system. While the tubes may allow the auto-focus system to communicate with the camera, there is little chance that you will actually be able to acquire focus at these close distances. In fact, I don’t even use the focus ring – I switch to manual focus, set the lens to its “macro” setting and I acquire focus by moving the camera closer to or further from the subject. This is only possible because I am not bolted to a tripod.

A big disadvantage of shooting handheld is, of course, camera shake. But, welcome to the world of small off-camera flashes. Those cheap little LumoPro 120s fire at 1/30,000 of a second when they are set to 1/32 power. Even though my 20D may only syncs at 1/250 sec., the flash duration is what is exposing the scene and when you get into exposure times less than 1/5,000 sec. even a moderate hand tremor can be imperceptible.

Because of the tremendous loss of f-stops and the fact that I want my lights firing as quickly as possible to reduce the negative effects of hand holding the camera, I usually want to get my lights in fairly tight to the subject. This allows me to fire the lights at a low setting (low power = faster flash duration). But of course, there is a downside to this (there is always a downside to everything in macro photography it seems).

The downside is that if the key light is 2 inches away from the subject, and the subject scurries 3/4 of an inch away from the light, I’ve just lost another stop of light. So I have had to find ways to restrict the insect’s movements to a small surface area, and then light that surface area as evenly as possible.

Since I typically try to shoot my insects isolated on white, I like to start out with one light coming almost straight down, but just a little bit behind the subject and angled towards the camera slightly. The second light will usually sit approximately 60° off camera axis. Both flash heads are usually within 3-5 inches of the subject area and each flash head is oriented horizontally so as to spread the beam evenly over as wide an area as possible. I usually place the insect inside a white ceramic bowl or casserole dish. Casserol dishes have the extra added benefit of having a glass lid which can come in handy when working with live insects.

Refer to the set up photo above to see how these lights are arranged.

Each type of insect offers its own unique set of challenges with respect to restricting its motion. I have discovered that earwigs and several types of spiders absolutely refuse to step into Vicks® Vap-O-Rub™. These creatures can be held in place simply by smearing the greasy, stinky goo in a circle around the spot you want the action to take place. However, other insects – ants, for instance – will just walk right through Vicks like it’s not even there.

I have discovered that ants love to swim in water. Swimming in vinegar, however is not high on their list of “likes”. They don’t like swimming in bleach either, but I’d rather not use that if it can be avoided. So, for ants, I build a little suspension bridge out of a couple paperclips and some clear tape. 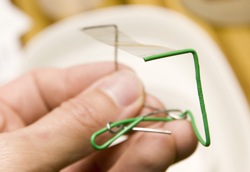 The bridge then gets placed into a bowl of vinegar. The ants will scurry all over the surface, even climbing down the paperclips to the vinegar. Most often, the ants will try to swim away once, but instead of swimming they just end up twitching a lot instead. I simply lower a tooth pick which the ant will invariably grasp gratefully, and I lift the ant back onto the bridge. Most ants don’t go back for a second dip after that. 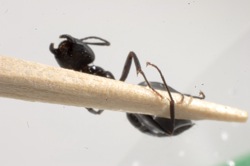 After an ant has taken a vinegar bath, it will spend a few minutes grooming itself to remove the droplets of vinegar from the antennae and legs – so be ready with the camera!

Flying insect present a whole different set of challenges. Since I do most of these shots on my kitchen counter, I clearly don’t want to let dragonflies loose in the house. Even if I was working outside, I wouldn’t want the insects to be flying away constantly, either. That was problematic until I ran across some information that indicated insects need the air temperature to be at least 52°F in order to achieve flight. 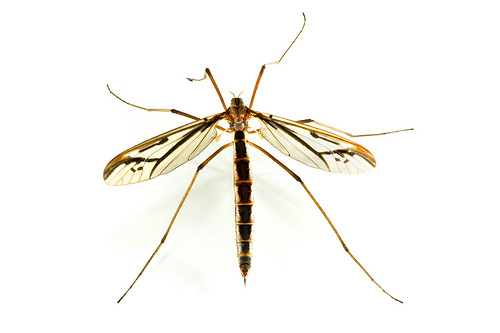 Shooting on the kitchen counter is one thing … shooting inside the refrigerator is an entirely different matter, however. And I am not THAT committed. By refrigerating a flying insect for 20 minutes prior to shooting, I can usually get 2-3 minutes of shooting before the insect will exhibit signs that it is considering flight. I then recapture and stuff it back in the fridge for another few minutes.

I have also discovered that by placing the ceramic bowl inside of a larger bowl filled with ice, the ambient air temperature around the insect is much lower while I am shooting and this can greatly extend the length of time I can work with an insect before it starts thinking about taking off.

There is so much more that I would like to share, but I’m afraid this post has already gone on too long. I just want to close by encouraging you to experiment and explore.

I’d love to hear of any insect photography tips you may know. Share them on the comments.


Scott Hussey is President of MSH Marketing Group, an advertising and web development company located in Keene, NH (USA). In addition to photography for his commercial clients, Scott sells his work through various microstock photo services and he operates Scott Hussey Photography, specializing in event photography. Follow him on flickr.

Your Complete Guide For Photographing Maya In The Year Of Apocalypse

The complete guide on photographing in harsh sunlight