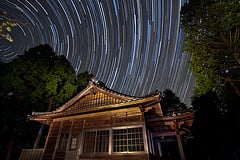 Ever seen those pictures where the stars streak across the sky in a big arc? Or maybe the whole sky looked like it was spinning?

What you saw was star trails. The streaks were light left behind on the sensor or film from the star as it traveled across the sky in front of an open camera shutter. In fact, it only seems that way. What actually being recorded are stationary stars and the rotation of the earth that makes them spin. Kinda like you were standing on a vinyl record while it is playing. (yes, vinyl record, it is a form of ancient iPod).

For me, the images seem to have a certain magic or mystery about them. You must have heard a photographer talking about capturing that perfect moment in time. Well for capturing star trails you will need to capture the perfect hour or two in time. For such amazing looking images the technique to capture them is really quite simple. Keep reading for a complete set of instructions from start to finish. 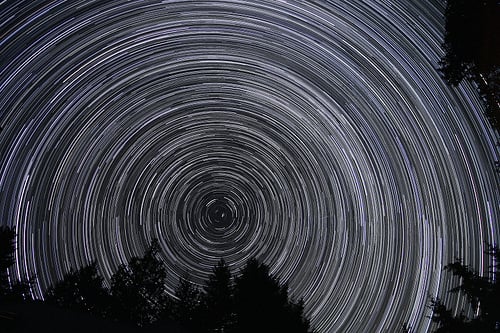 What Will You Need?

Before you gas up the car and head out in to the night, check the short list below to make sure you have all the required gear.

If you are heading into a remote location it may be much colder at night than what you are used to where you live. So be prepared. 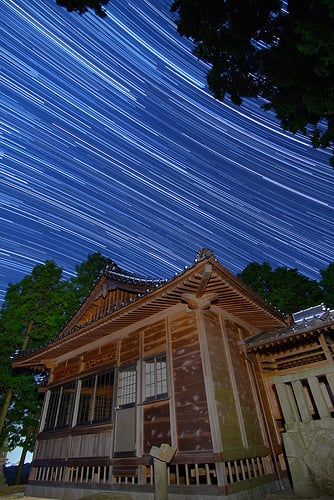 A temple for foreground interest

Where should I go?

A temple for foreground interest….

I tend to look for locations that are have some foreground interest. It may be an abandoned building, large infrastructure like a radio tower or a bridge, or some natural features like rock formations or big trees.

You may choose to add light to these features with a flashlight or keep them as silhouettes against the star filled sky.

Though it is possible to capture star trails in town, it is much easier if you try this far away from any city lights. Darker skies means you can crank up your ISO and open up your lens really wide and capture a greater number of visible stars.

City lights that are not even visible to the naked eye will show up over a long exposure so when you think you have finally found some dark skies keep on driving!

It really pays off doing some research before embarking on a shoot especially if you have never seen the location in the day before. 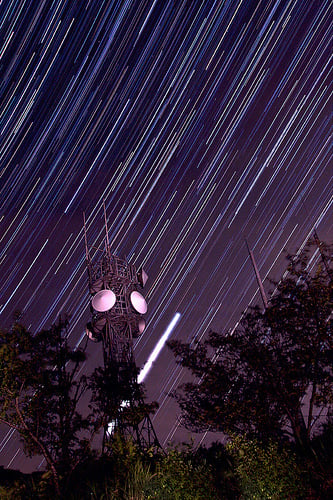 There are multiple ways to go about shooting star trails. I will start with the basics that do not change whether you are using an analogue SLR or a DSLR.

Before dialing in any settings you should go ahead and mount your camera onto a tripod. Roughly compose your shot and set the focus.

In the dark, it is not easy to get the AF to lock on to anything, but do not worry there are several solutions to this.

So now you should have your camera focused and set to manual focus (MF) and the shot roughly composed. 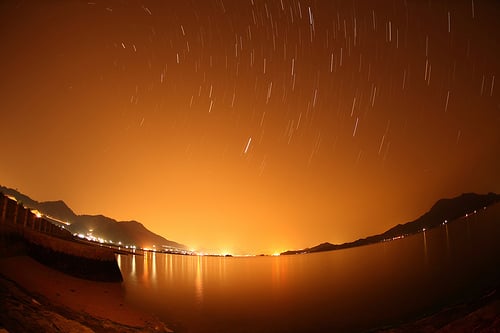 White balance could be a whole separate tutorial on its own so I will keep this really brief. If you would like to know more about white balance in general then check out this very comprehensive article.

White balance is the relative warmth or coolness of white light. A white object would appear slightly blue with a cold color temperature and it would look slightly orange with a warm color temperature. I tend to shoot night skies with the white balance set to “tungsten” which gives a nice blue look or the extreme opposite of 10000 Kelvin giving it a deep orange color. I find that auto white balance leaves the sky brownish or “dirty” looking. You will have to refer to your cameras manual if you do not know how to change these settings.

For shooting options, one could choose to do it all in one shot or shoot multiple shots and “stack” them after the fact using computer software. I personally find that shooting multiple images and stacking them yields much nicer images than those done all in one shot. 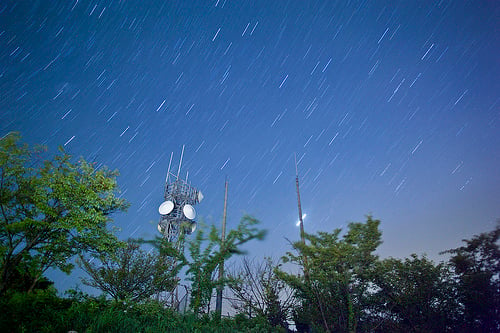 If you are going to do it all in one shot then your biggest concern should be noise. To fight noise, one could use a narrower aperture and a lower ISO speed but these settings will typically not pick up very many stars. If this is the route you are going to take, and I suggest at least trying it, then here are the steps and settings to follow:

For example, stars over a 30-minute exposure would appear much longer in the frame at 50mm than they would at 15mm. If you find that you are limited to shorter exposure time due to noise, or any other factor, try shooting at a longer focal length to increase the appearance of the star trail length in relation to the frame. See this article that explains focal length and relative star trail length. 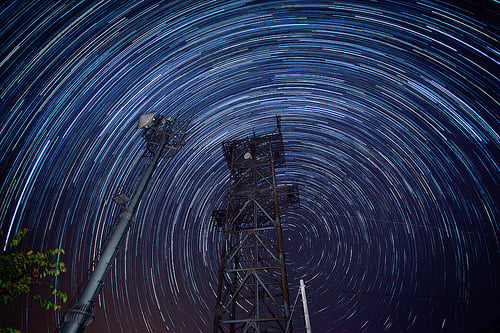 A 90 min stack. Passing clouds broke a few of the trails especially at
the bottom of the frame

My heavily preferred way of shooting is shooting multiple shots and “stacking” them later using computer software. Shooting short exposure pictures means less noise, so one can shoot with a wide aperture and a faster ISO that will pick up many more stars than the previous method.

One can do this because noise becomes much less of a factor. Noise generally increases with time and with stacking, you only have to worry about 30 seconds. That means even at ISO 800 noise will be less of an issue to worry about.

There is even an option to include dark frames, which are frames shot with the lens cap on, so that even the tiny bit of noise from ISO 800 over 30 seconds will be removed.

With the higher end DSLR’s and the improvement of sensor noise reduction in newer DSLRs the ISO can be bumped even higher which will result in even more visible stars streaking across the sky. Of course, you will need to find the balance for your camera based on how it handles noise.

For the stacking method it is necessary to use a cable release. It could be done with a remote but then I would recommend shooting much longer exposures than 30 seconds and stacking those, simply because a remote is not as comfortable to use.

You will be shooting possibly hundreds of images so it is important to make sure there is plenty of space on your memory card.

What do you mean by “Lighting A Foreground Interest”? 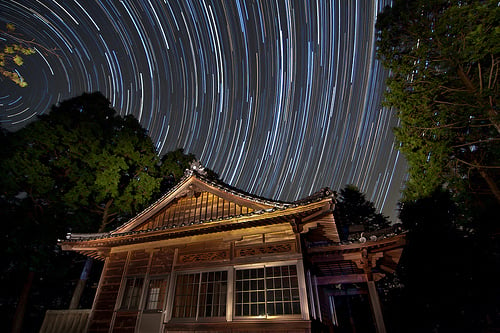 I mentioned above about adding light to the foreground objects and explained a few things to consider about white balance in relation to that. I often include foreground objects to complete the shots because images of just stars sometimes seem to lack a subject (and interest).

I look for interesting buildings, infrastructure or natural objects like big trees or rock formations and make them the subject of the images. I light these foreground subjects with a flashlight or speedlite. A flashlight can reach far places and can be moved around while lighting to remove shadows while a speedlite can freeze a tree that may be moving in the wind.

You will probably use a flashlight most of the time because they are a much more flexible tool and leave the foreground with a much more organic look. I highly recommend doing a few lighting test shots to see how much light is needed before locking that cable release. Too much light will distract from that beautiful star filled sky you are about to create. Remember, for foreground lighting: if you are shooting at low whilte balance, use a “warm” light like Xenon torch;  if you are shooting at “tungsten” white balance, use a “cool” light like LEDs flash light..

If you are stacking then I suggest doing the foreground lighting at the beginning and again at the end. In case one of those is unsuitable for the final shot. You simply exclude those frames from the stack. If it was done in the middle and a mistake was made leaving those frames unusable it would create a break in the trail that would take away from the shot.

A final note for those with experience in night photography, keep in mind that you are now shooting wide open with your ISO jacked so adjust your lighting techniques to accommodate for that with low power flashes or less lighting time with a flashlight.

This is my favorite software. Unlike other free programs, it runs on Mac and Linux as well as Windows. What I like about StarStaX is the incredible speed. It is waaaay faster than using Photoshop and much easier as it does not require you to create any blank documents to get started. Open up the program and import your images. Hit start and within seconds your image is finished. Check out the homepage to see the great features it has.

This method gets the job done but is slow and ties up memory while stacking.

One major downfall of this software is that is only available for Windows. I used this a long time ago before I started using Mac. This got the job done and before StarStaX was a way of creating animated time lapse video of the stacks. I think this software has now become old and needs to be revamped if its author wants people to continue to use it.

There you have it, if you got here, you are brave! make your time count and schedule a star trail shoot this weekend.

My name is Trevor Williams but am probably more known as tdub303. I am a general camera freak and I like to use a variety of cameras and a variety of formats. I love light painting and shooting at night which led to me being featured in a documentary. I also wrote 2 chapters for a book; one on light painting and one on star trails. My night shooting even landed me almost 7 minutes on the six o’clock news. I recently appeared in a TV commercial. I also shoot weddings and portraits to help offset the expensive camera gear habit I have.

The Making of Phill’s Pet