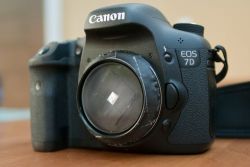 Part time photographer (and full time DB architect) Josh Grant, was able to shot an entire like the old schoolers, with a pinhole camera. In this post Josh shares how he made the pinhole camera (from a Canon 7D) and filmed the movie. josh picked the perfect subject too – a locomotive to match feeling with technology!

I’ve wanted to make a pinhole lens for years now, but I finally got off my duff and did it after reading Matt Devlin’s fine tin can digital pinhole tutorial.

I had a spare body cap, but I couldn’t find a tobacco tin, and I didn’t have an empty aluminum can handy; I recalled reading somewhere that aluminum foil could do the job, so that’s what I went with.

I got the idea for adding a U.V. filter from (nz)dave’s flickr post (which is a great digital pinhole tutorial by itself). I had a 52mm double-threaded U.V. filter that I got free when I ordered a circular polarizer, and I had never even opened the package; I was pleasantly surprised to find that it fit snugly in the little groove around the edge of the standard-issue Canon body cap; that made it a snap to secure with a few strips of gaffer tape.

At first, I was just thinking of a way to keep dust out of the camera body and to protect the delicate strip of tinfoil, but I later realized that I could attach a lens cap and even a collapsible lens hood. Handy. 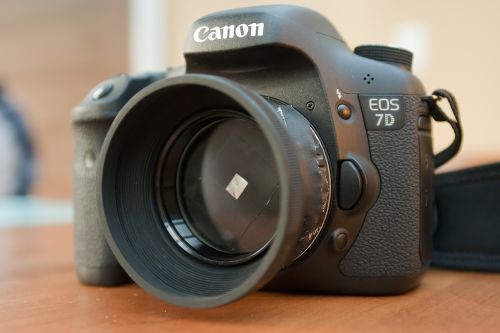 I created a reference card for making a similar body cap pinhole. 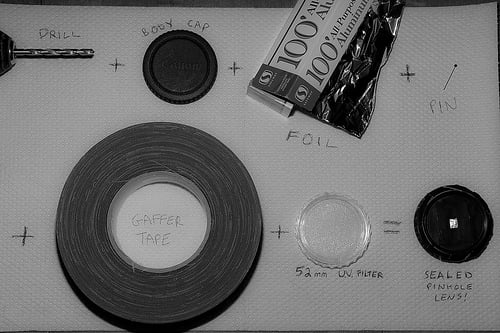 Now, for the pictures.

I took it with me to the park the next sunny afternoon, along with a tripod, expecting to take a few multi-second exposures of dandelions. I was surprised to learn that I 1/5s was all I needed at ISO 800 to get a proper exposure. I cranked the ISO up to 5000 shortly thereafter, getting a shutter speed of 1/30s.

I was thrilled that I could shoot pinhole photos hand-held at that speed! It was only later, as I was leaving the park that the significance of the “1/30s” shutter speed hit me… That was the correct shutter speed for 24 frames/s HD video! That was my goal for the weekend: find a classic pinhole photo subject, get the camera back on a tripod, and make a short video. Here’s the result:

Oh, there’s one more bonus to shooting in video mode: the live view actually works properly with the pinhole lens. No more looking at a black viewfinder, wondering if your horizon’s straight or if your subject is actually in the frame!

I’m no videographer, and the Canon 7D’s high-ISO video is quite noisy, so I’d love to see what can be done by somebody with some video skills, a Canon 5D Mk II or Nikon D3s, and a homemade pinhole lens.

« Canon Mug Giveaway Winners
Poll: What Is The Most Important Item In Your Photo Bag? »