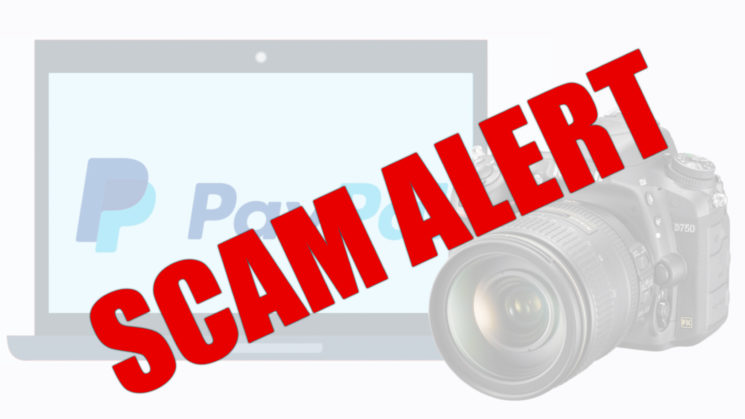 When buying and selling gear online, you can run into all sorts of scams. UK-based photographer Joanna Rose Hufton recently fell victim to one that makes use of a Paypal loophole. She sold her £1,300 camera through eBay, but due to the scam, she was quickly left without both the camera and her money.

The photographer agreed, admitting that she didn’t think too much of the request. She says that she’d done it before and never had any problems. The buyer sent her the new address in a message, and she sent the camera to that address. However, the problems began when the camera was delivered.

Joanna Rose received proof that the package was delivered and signed for. But, the buyer then opened a case on PayPal, claiming that they never received the item. PayPal’s terms and conditions state that the seller should “ship the item to the shipping address listed on the PayPal Transaction Details page.” Obviously, the photographer sent the camera to a different address, resulting in PayPal ruling in the buyer’s favor. In other words, the buyer was refunded in full, and they also got to keep the camera.

Naturally, Joanna Rose tried to appeal to PayPal’s decision. However, she says that they told her there was nothing that they could do. She claims two members of PayPal staff even told her that they were aware of this loophole, which I believe was especially frustrating.

Joanna says that she has also contacted ActionFraud police which is “investigating the matter.” A PayPal spokesperson said simply: “We have looked into Ms Hufton’s case and unfortunately it appears she has fallen victim to a scam.”

“The scammer tricked Ms Hufton into sending the camera to a different address, thereby invalidating her seller protection cover. Sellers need to be very wary if a seller asks them to change the delivery address. They must post the item to the shipping address on the ‘Transaction Details’ page. If a buyer asks you to send it to another address then you will not be eligible for re-imbursement under PayPal’s seller protection programme.”

“When I spoke to PayPal they just said they have to stick to the terms and conditions,” Joanna Rose told the Liverpool Echo. “It is upsetting. I just want to make it known that it’s a scam because it’s such a lot of money and I don’t think people know that this is PayPal’s policy.”

I can only imagine how frustrating this must have been. It’s a fact that PayPal is simply following its own policy, and there’s nothing wrong with it. On the other hand, the policy has this loophole people can use for scams, as they apparently do. And there’s nothing you can do about it as a seller.

Take this as a cautionary tale when selling stuff through eBay and using PayPal. Even though some requests may seem genuine, I guess you can never know. So, only ship the stuff you sell to the address listed in the “Transaction Details” page. Better safe than sorry.

Have you been in a situation like this? Have you ever agreed to change the shipping address, or do you always consider these requests to be non-genuine? I’ve been on the other end of it, so to say. I spend a lot of time at mom’s or boyfriend’s place, so I sometimes have the gear and other items delivered to their addresses. But of course, I’ve never scammed anyone and I never would. So I’m curious to hear your thoughts and experiences.

Photographers, beware: this is how you can get scammed

Old Fashioned Bank Accounts Cost Your Business Time And Money – Why Not Use PayPal Instead?

« Tourist fined $20,000 after his drone landed in Las Vegas airport
This folding “ballistic” quadcopter drone launches out of a cannon »