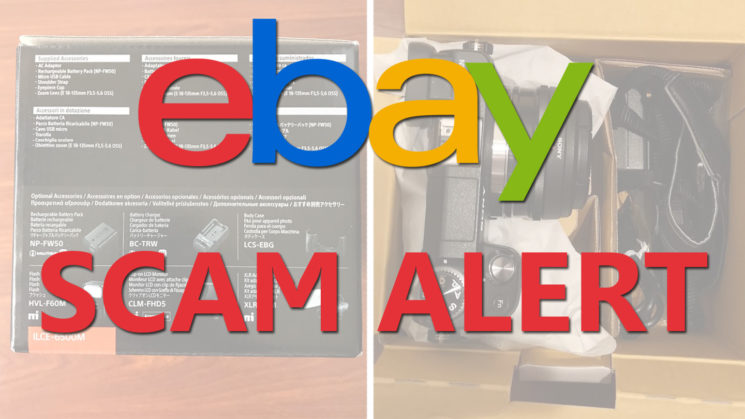 Buying and selling gear online is convenient in many ways, but sadly, it comes with a risk of various scams. Apparently, the scammers have figured out how to rob you even through eBay, the website which is generally one of the safest options. Photographer Liz Moughon was recently subject of one such eBay scam, and she shared her story with DIYP as a cautionary tale for all of you who want to sell your gear online.

In mid-June current year, Liz sold an unopened Sony a6500 with 18-135mm lens kit which she’d won on a competition. She listed it on eBay for $1,400, the buyer paid for it through PayPal and the package was delivered. But then, the buyer asked to return the camera for a full refund, claiming that Liz sold him the Sony Nex-6 with a 20mm lens.

What the buyer did was simply taking Liz’s camera out of the packaging box, put his camera inside, took photos and sent them to eBay as a “proof” that she’d sent him the wrong product. She suspected that he’d done that, so when he asked for a refund, she declined his request and called eBay to warn them that this could be a fraud.

“I asked them if they could investigate the buyer. They said no because they had to follow their procedure. I begged them not to go through with the return/refund. They said they had to because that’s the policy but confirmed that if the buyer returned a camera different from what I listed, then they would refund me.”

This is what Liz sent: 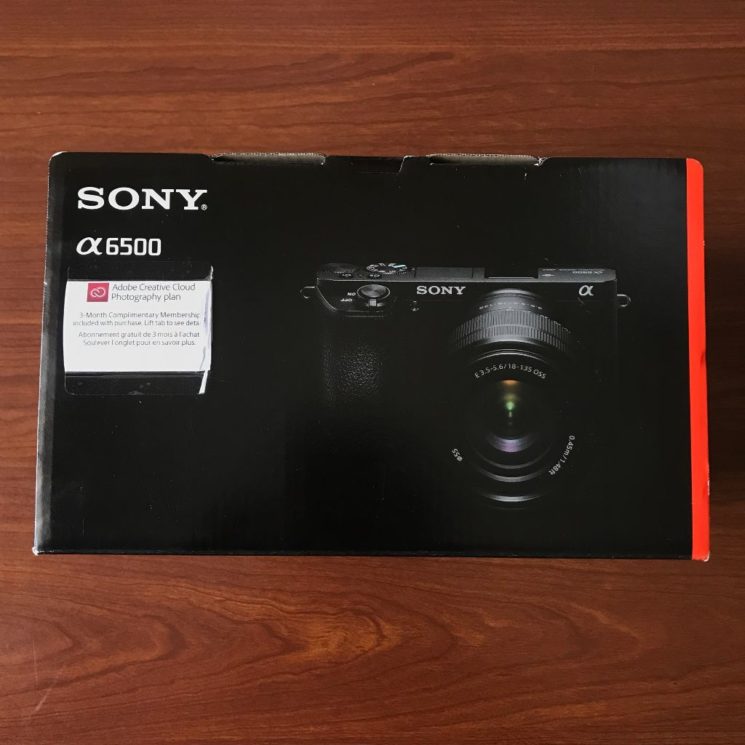 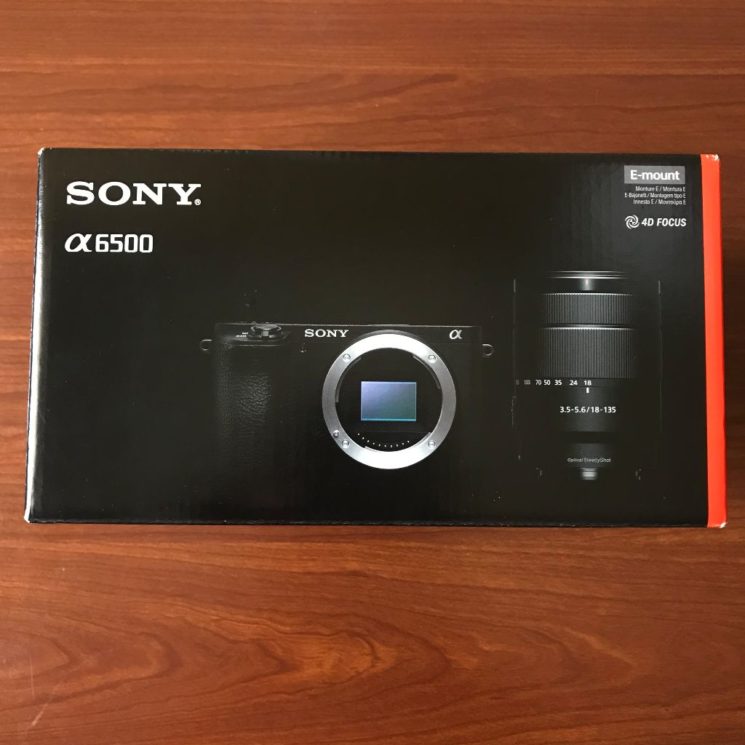 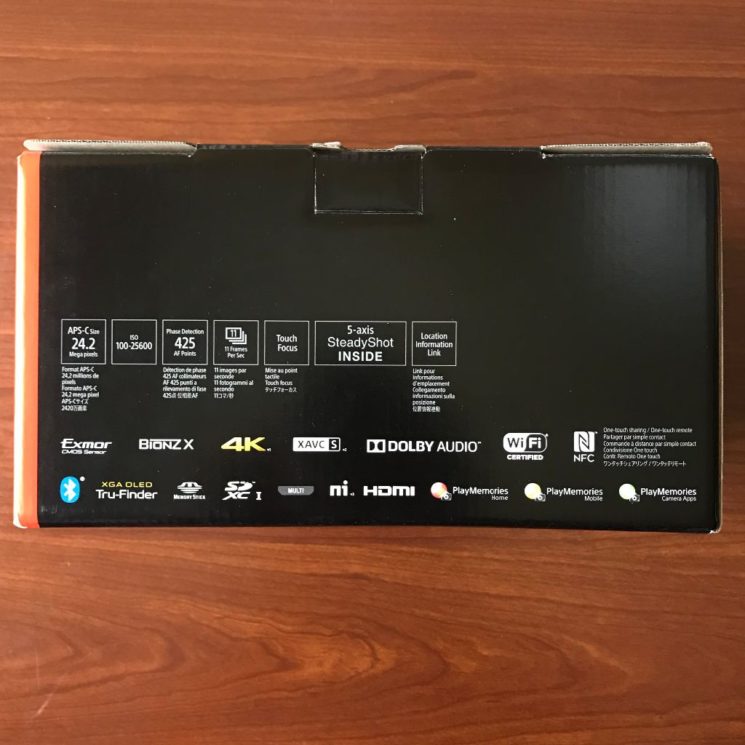 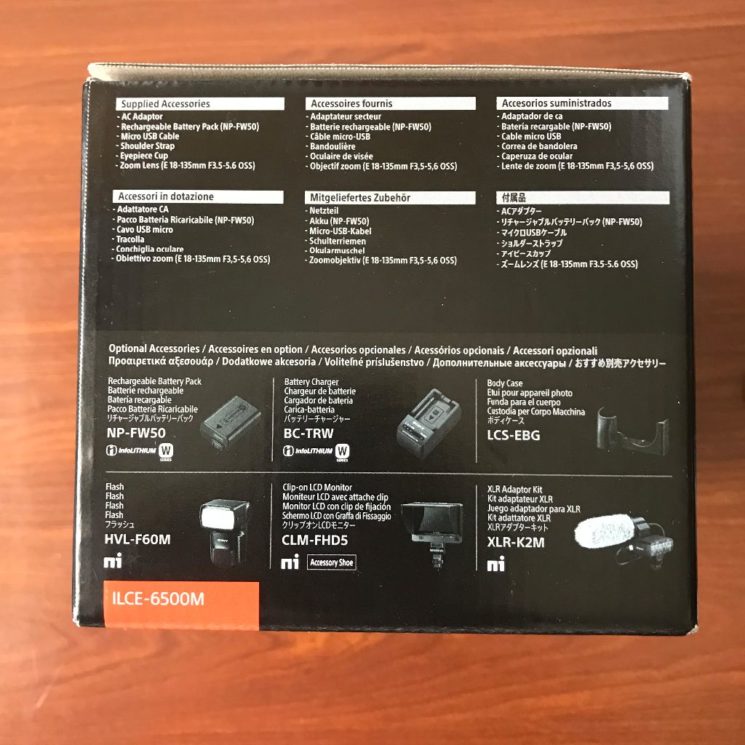 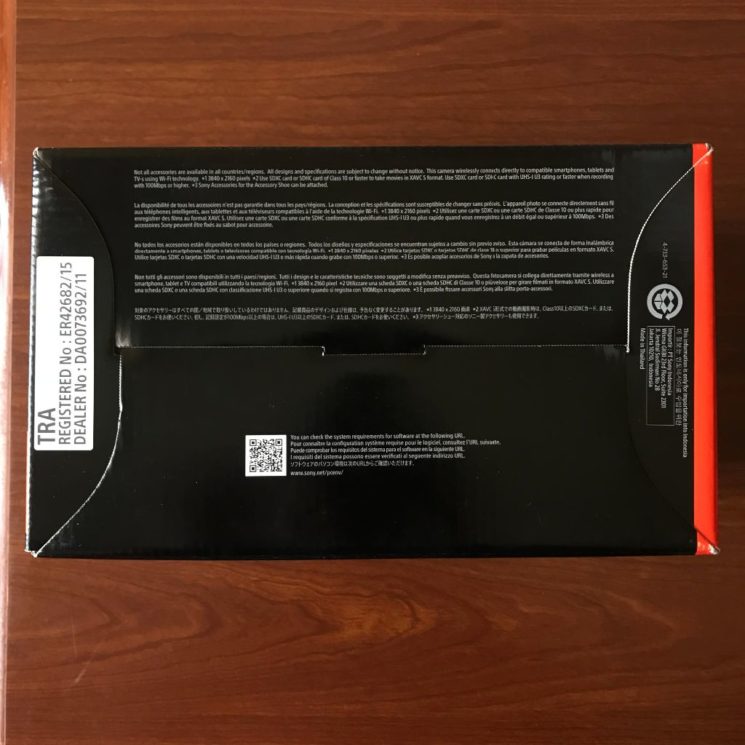 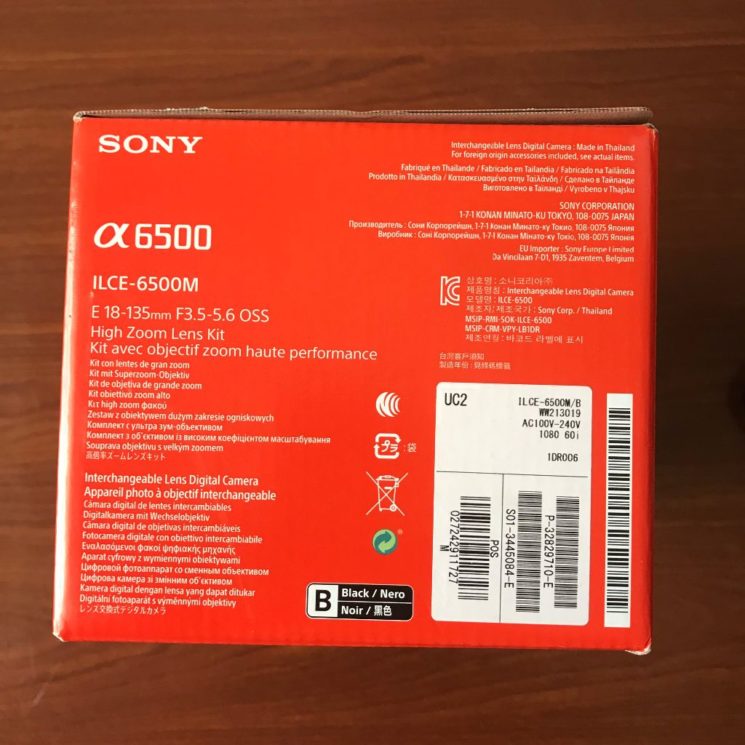 And these are the photos submitted by the buyer as “the proof” she’d sent the wrong package: 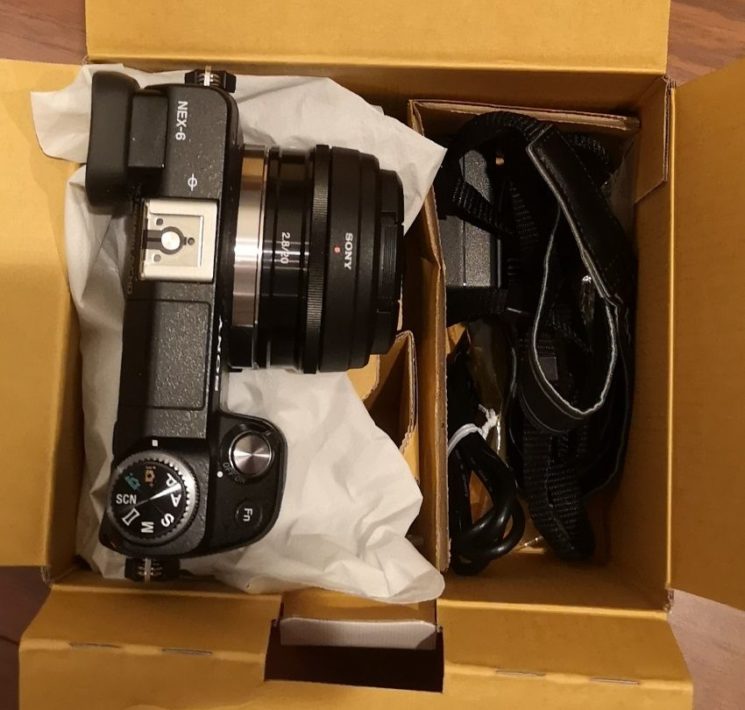 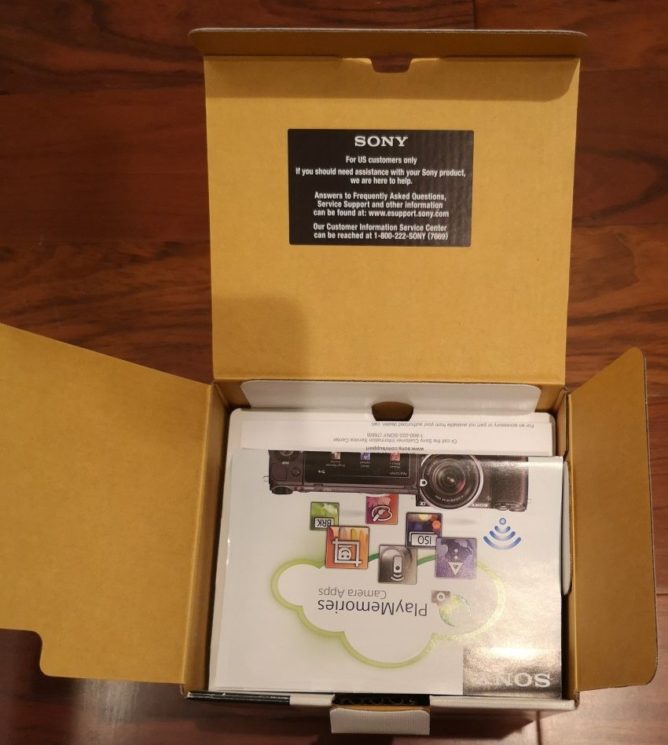 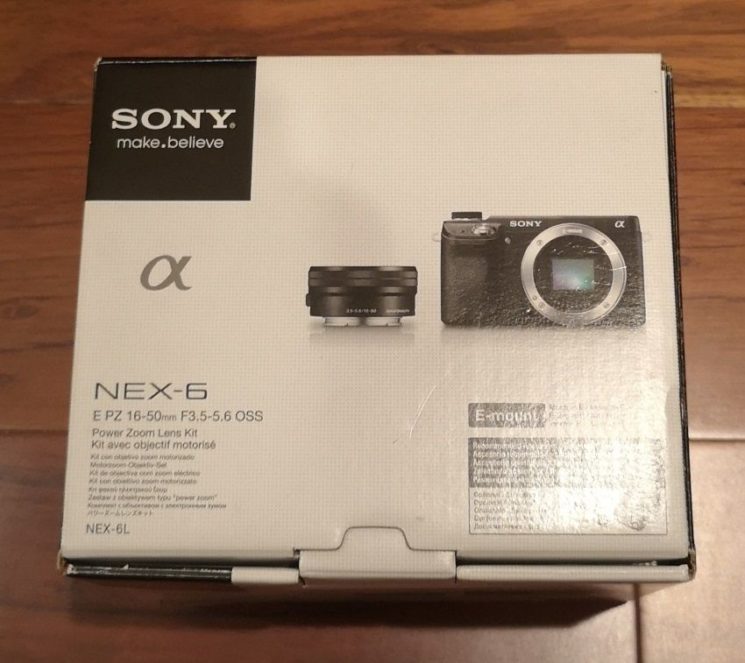 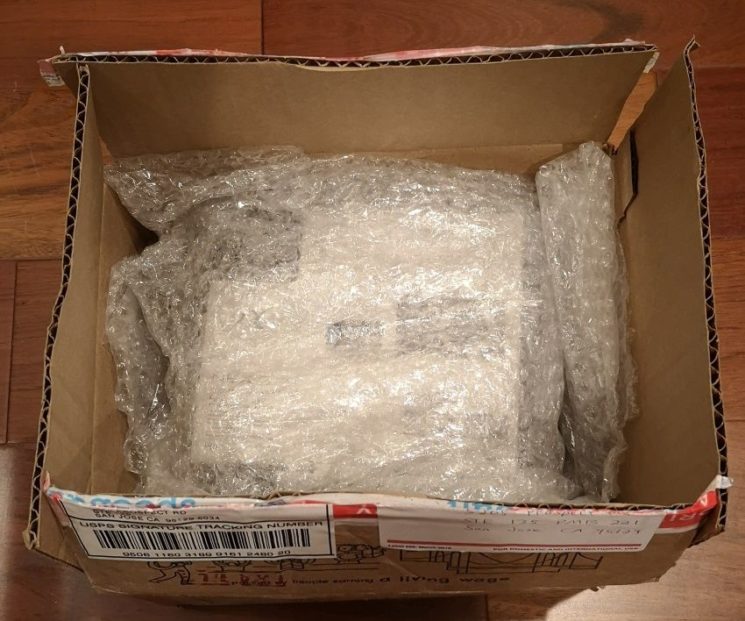 In order to try and stop the refund from being paid out, Liz placed a stop payment fee on her bank account so that eBay couldn’t access the funds to refund the buyer. Unfortunately, it didn’t work. It turned out that, with her bank, it only works with recurring payments, not one time payments. So, the buyer returned the Sony Nex-6 camera to Liz. Since it was of similar size and weight, she didn’t bother getting the USPS involved because shipping had gone smoothly. eBay refunded the buyer $1,400 and the case was closed. But Liz didn’t want it to just end there and she re-opened the case with eBay.

“I requested to re-open the case with my new photos proving that I received a camera different from what I listed. I heard nothing for several days, so I called again. eBay asked for a police report and said if I couldn’t get one, to get the contact info of the officer I spoke to so that they could contact him. I got a police incident report, and the officer said they don’t deal with online shopping at all but that he would be happy to speak to eBay for me. I sent it in.” 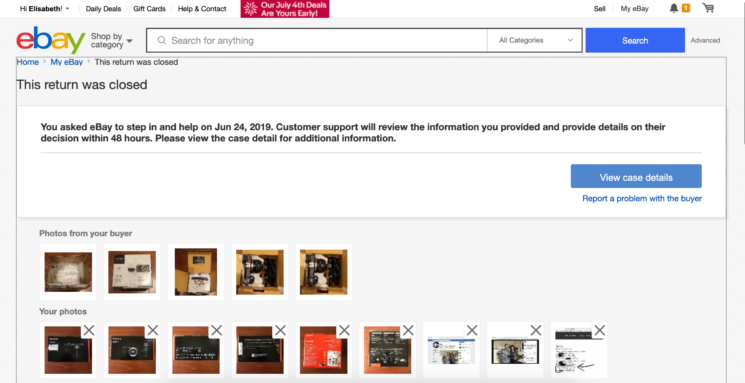 Liz didn’t hear from eBay for several days, so she called again. And it got more complicated. They asked for an affidavit, so she filled that out and sent it back. Again, she didn’t hear from them and she waited a few days before calling again. “This time the person on the phone told me my case had been denied for the second time. They didn’t even bother to contact me to tell me that,” Liz tells DIYP.

“I was on the phone for 45 minutes and still got nowhere. Finally, the person on the phone (who seemed to believe me) told me that if this had been less than $750, then she could have refunded me. But she didn’t have the authority to release an amount more than that. I also learned that the people who review these cases do so only from written documents, but they never talk to the seller or the buyer on the phone. I begged her to ask them to investigate the buyer, but she said it’s not in their policy to do so.” 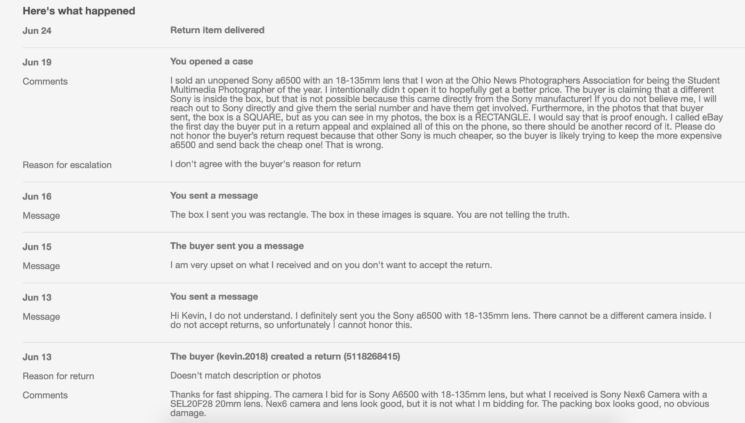 After the pretty unpleasant experience with eBay, Liz tried turning to PayPal. However, they said that they only deal with cases that buyers open. Then she called her bank, which temporarily released the funds until they make a decision, but it would take months before they do.

Liz didn’t have any luck with eBay, her bank and PayPal, so she decided to turn to her last resort: social media. And it worked! After days on the phone with their representatives, it only took eBay a day to contact her on Twitter and Facebook saying that they’ll re-open the case. Finally, they refunded Liz 10% seller fee of $140, and the entire $1,400. 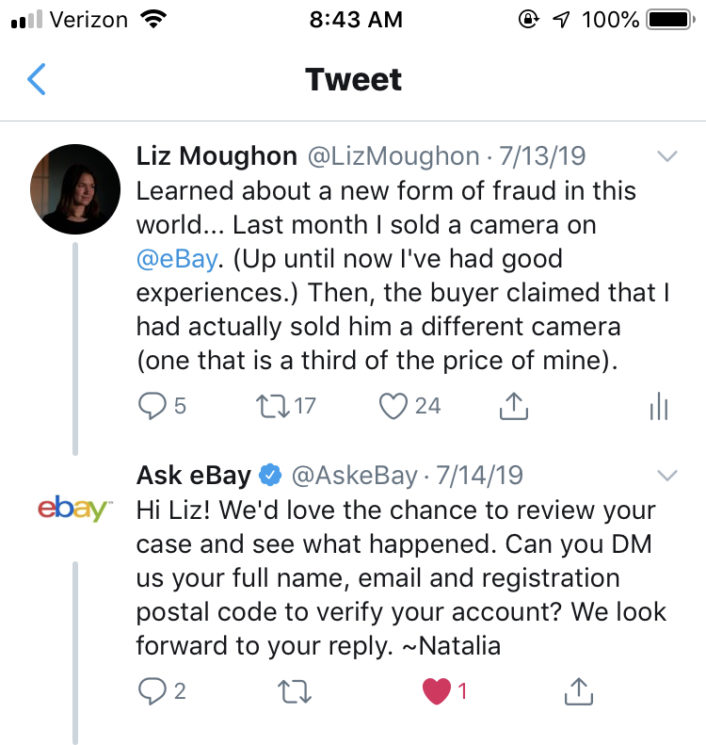 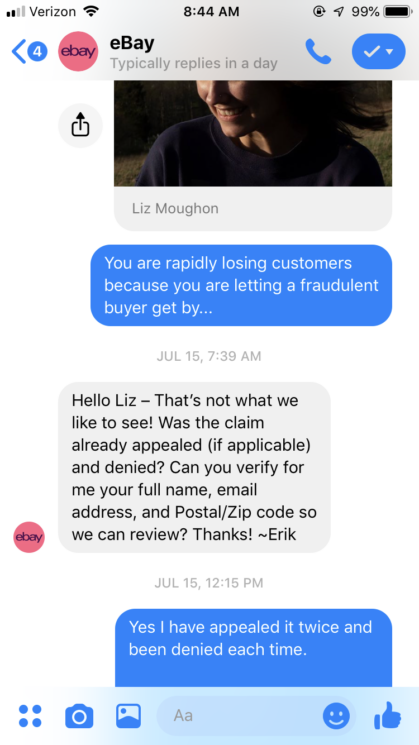 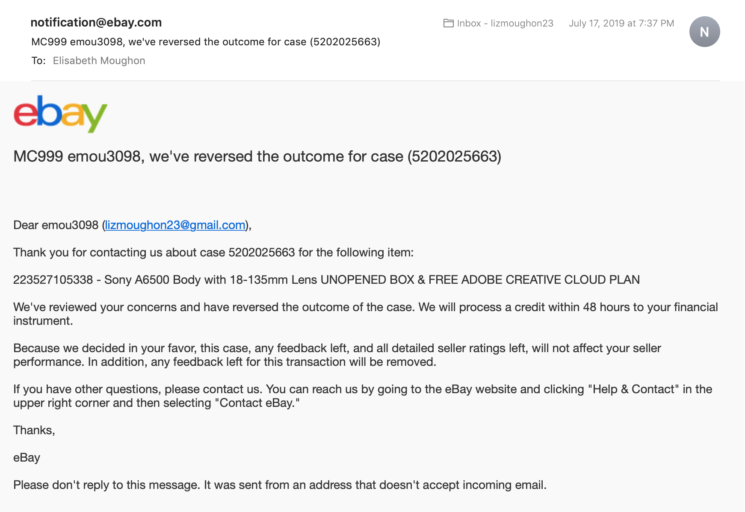 “I honestly feel bad that eBay was caught in the middle of this and is probably suffering the financial loss from the refund. I appreciate them finally coming through for me, and I understand how complicated it can be to review cases like these. My frustration is that during every conversation they started with ‘Well the buyer said…’ They began by believing the buyer first. Even though I called multiple times and voluntarily filled out every form, they refused to ever investigate the buyer until the very end. I just hope that they consider changing their policy to protect sellers and buyers equally. As it is, sellers can’t even leave feedback comments about buyers.”

Luckily for Liz, this ended up in refunding her for the loss after all, but it could have ended differently. She says that, if she ever sells something online, she’ll package the item at the post office and have someone video record her packing it up and handing it off to USPS. “Or I will only sell in person,” she adds.

As we can see from Liz’s case, eBay is protecting buyers way more than sellers. If you’re buying gear, it sure is good to know that you’re protected as a buyer. But if you’re selling, it can be a whole different story.  Dishonest people have apparently figured out that they will be protected as buyers, so they started using it for scams. Therefore, be very careful when selling your gear online, even via a safe website such as eBay. You can never be too careful.

Photographers, beware: this is how you can get scammed

« Aurora’s new drop-in mirrorless filters save time in the field and space in your bag
FaceApp responds to privacy concerns: “No, we don’t share your data with third parties” »