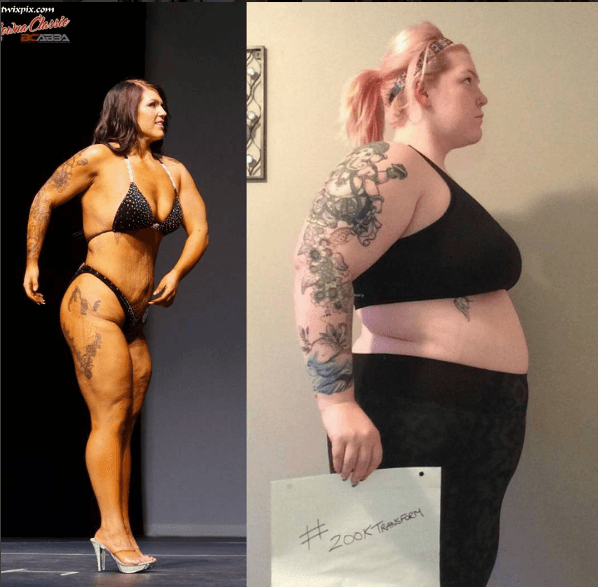 Imagine exercising your butt off, entering the bodybuilding competition, only to later find out your photo was omitted from the contest gallery because you’re not “perfect.” This is what happened to Jana Roller. She worked hard for two years, lost 140 lbs and entered her first bodybuilding competition. However, when she browsed through the gallery of photos from the contest, she realized there was no photo of her among the other contestants from her category. She contacted the photographer to ask shy her photo wasn’t included, and received an unpleasant answer. The photographer assumed that she’d be embarrassed by her body.

Anyone who has ever lost weight knows that this transformation leaves some excess skin. But regardless of this aesthetic “imperfection,” this is not what the competition was about. Jana went through tough training like all the other contestants, and she worked really hard to get to get fit and strong. Even though she is a photographer, she has found great passion for bodybuilding. She was excited about her first competition, although she was aware that she didn’t look stage lean:

Look. I get it that I wasn’t stage lean. Maybe some of the competitors didn’t think I was serious about my presence there. I worked for 2 years, lost 140lb, went through prep just like everyone else. I stuck to the plan, did hours of cardio, 5 am sessions. I worked just as hard to be told that I wasn’t good enough to be showcased amongst everyone else.

When she realized her photo was missing from the gallery, she asked the photographer what was wrong. The photographer replied saying that her appearance wasn’t great, so he decided to exclude her photo out of caution, as he was afraid she would ask him to edit or remove it. Grrrl Clothing shared Jana’s story on their Instagram profile, and lots of supporting comments followed:

Now, this misunderstanding opens several issues. First of all, I must note that losing weight is a tough and painful process; I’ve been through it myself. However, it’s extremely rewarding, and it doesn’t change you only physically, but mentally as well. Jana says that the photographer assumed she would be embarrassed by her appearance, so he didn’t include the photo in the gallery. Well, if he decided to assume things rather than communicate – he could have assumed that she wouldn’t have joined the contest if she’d been embarrassed by her body.

Then, omitting someone’s image this way can be interpreted as discrimination. If she was one of the contestants, then her photo should be in the official gallery just like anyone else’s. If she later wanted the photographer to edit or remove the photo, he could have easily done it.

Finally, this story raises the question of editing photos: why do we retouch people, when is it enough, and should we do it at all? It’s the imperfections that make you you. In Jana’s case, her excess skin is the reminder of all the hard work she invested in getting to where she is now. If the photographer decided to retouch the image, it wouldn’t display her as she is. But not posting the photo wasn’t the solution either.

I think what we can all conclude from this story is how important it is to communicate, and it goes both ways. I know it’s tricky to discuss someone’s physical appearance, but the photographer could have asked Jana if she wanted the photo to be included in the gallery or not. On the other hand, if Jana is aware that she’s not quite “there” yet with her looks, she could have said that to the photographer and make it easier for both. But either way, assuming things without asking and communicating is definitely not the way to go.

Editor’s note: we’ve approached the photographer for comments and will update as soon as we hear his reply.