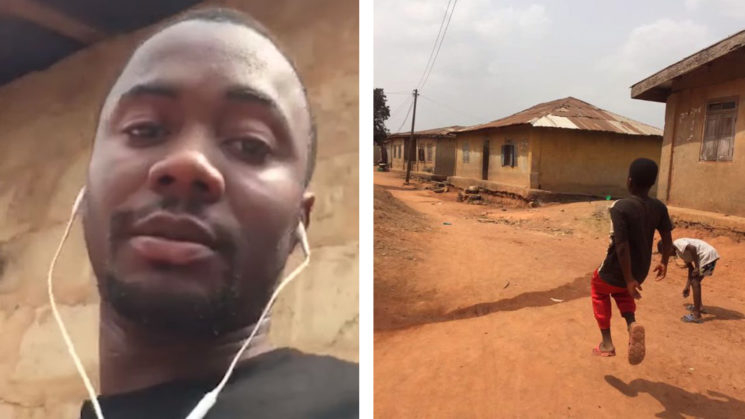 Not long ago, photographer Adam Grumbo received a Facebook message from a “hot American girl.” It turned out to be a scammer from Nigeria, who wasn’t very good at pretending to be someone else. Instead of reporting or blocking him, Adam tried something unexpected. He hired the scammer to document life in his village and share photos and videos with Adam. Although unusual and risky, it turned out to be a great decision.

Adam explains that pretending to be a hot American girl is “a common scam used by Nigerians to get money.” The young man named Tobi was quickly busted, but Adam wanted to give him a chance to earn some money without cheating anyone. He asked him if he would like to shoot photos and videos of his home and his village. Tobi said yes, and started documenting his daily life, as well as the scenes from his village.

After he received some shots of Tobi’s home and its surroundings, Adam sent him $100 for the next task. He was supposed to go to the market, buy some food and take photos and videos of the market and people. Tobi received the money and fulfilled his task. He sent Adam a video where he talks about Nigeria and its people, their way of life, and food. It’s beautiful, and you can see it from 3:14. He also bought some food to prepare his favorite meal. He documented the whole process, from buying the food to preparing the dish, with photos and videos.

“I know Tobi, whether he’s an honest person or not, is really struggling to survive in Nigeria,” Adam explains. Adam adds that he, as well as many people watching this video, are much more fortunate than Tobi is. He therefore decided to help Tobi further. He started a GoFundMe page for Tobi which will pay for his next photography assignment. That money will help Tobi to finish his Electrical Engineering course at college and buy the books he needs. It will also help him buy a generator to charge his phone and continue reading after it gets dark. As Adam writes, Tobi lives with four other students who will also make use of the generator.

The GoFundMe page has already surpassed its $1000 goal, but everything above the target will also go to Tobi. Other than making his education easier, it will also cover data service costs so that he can send photos and videos to Adam. Tobi is grateful for the opportunity, and he even filmed a “thank you” video for Adam:

The project has just begun, so I believe that we can expect more videos and photos from Tobi in the upcoming weeks. Adam has set up a YouTube channel where he will post the videos he receives. This way, we will get to learn more about Nigeria, its people, and their daily habits. I believe it’s an interesting and valuable experience for all viewers, and it will bring Tobi a job and let him earn money an honest way. It all started as a petty scam, but it appears it will turn out to be a really interesting project.

[Hiring a Scammer to be a Documentary Filmmaker via PetaPixel]