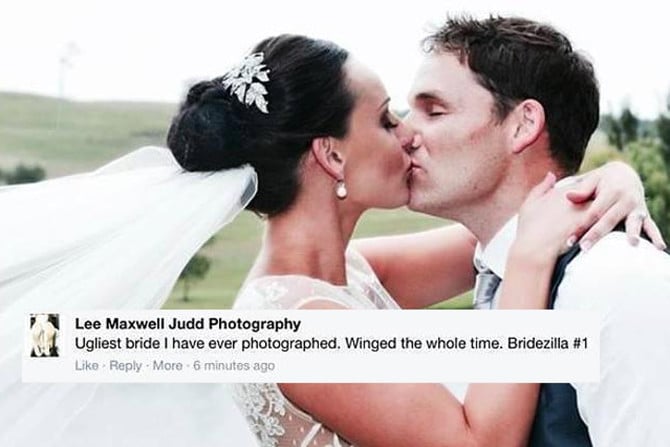 The digital revolution lead to there being more photographers today than ever before, and with so many people calling themselves professional photographers, clients are able to choose from a wide range of prices and experience.

As is the case with so many of fields, you usually get what you pay for. This was a lesson Ashlea and Daniel Howard from Sydney learned the hard way, after they reportedly hired a local builder and hobbyist photographer to document their wedding.

The dispute between the couple and the photographer, Lee Maxwell Judd, has taken to social media, where a photo of the couple was posted along with the following caption: “Ugliest bride I have ever photographed. Winged the whole time. Bridezilla #1”.

Unfortunately things didn’t end there. Other “highlights” in the ongoing dispute include the photographer mistakenly sending the photos to a woman with the same first name who inquired about his services, the bride accusing Maxwell Judd of drinking excessively at the wedding, the couple blaming the photographer for taking under-exposed, over-exposed and out of focus photos, and Maxwell Judd responding to posts on social media with responses such as this:

“I don’t need to explain myself to you. I explained to the woman how to open the files. Seems she is so dumb that she cannot take instruction. I offered to take back the disks and reformat. I have 20mb files in full resolution clear and exposed correctly. From here on I will offer Ash nothing. She has been a rude bitch with no respect”.

At some point Maxwell Judd admitted he sent the photos to the wrong person and apologized for the abusive comments. Other comments, such as calling Ashlea the “ugliest bride” and “bridezilla”, he blamed on a hacker who compromised his Facebook account and posted a photo and several comments on his behalf.

Reading through some of the photographer’s latest comments it seems highly unlikely that there ever was a hacker involved, and if there was then this case should be taught in classes about how NOT to run a social media page.

Was this the hacker again referring to the bride as bridezilla? Probably not…

Ashlea Howard, posted the following message on Facebook several days into it all:

“Wow! I’m overwhelmed with the support and kind words from all of you out there. So many strangers and professional photographers! Thank you sincerely. Putting the Facebook comments aside, let’s not steer from the main issue. The quality of the photos was unacceptable and he acted very unprofessionally leading up to and especially after the event. The photos were sent on a USB with no note, business card or any form of packaging to the WRONG person. A random had all our photos. This was after many weeks of asking when we will have a sneak peek or a copy of what we paid for. Disgusting behavior in how he responded at every stage. Lying to me directly on the phone. He has been rude and unprofessional at every stage. Even asking if I wanted sexy/lingerie shots the day before my wedding, not asking in advance. It came across very creepy. Red flag! It is not a shock if he wasn’t hacked because of how he treated us but of course it is possible and he will want to use this as an excuse! Hacked or not, he still admitted in. Text he agreed he was a ‘Tossa’! This is just my experience with Lee maxwell Judd photography. I’ve had another contact me with the same experience. Please so not let this guy continue to fake a career”.

Despite all the negative press and his Facebook ratings dropping to 1.6 stars, Maxwell Judd said he couldn’t care less.

In fact, according to him, this mess has given his hobby quite a boost. “Since all of that’s happened I’ve had a lot of hits on my page and I’ve had a couple of inquiries and a deposit paid,” he said, later stating that “since the hack I have had a few hundred new likes. I am booked out till 2019 with wedding photography and all of my clients have paid 50% deposits. Most of my clients have messaged me with their support and encouragement. For those adding negative reviews, keep them coming”.

Regardless of his claims, I have a hard time believing Maxwell Judd will walk away better off than he was before this wedding. Not to mention that the couple is also considering taking legal action against him.

The couple had obviously gone through a terrible ordeal, and photographers in general probably won’t get too many bonus points after so much of the media that covered this story regarded Maxwell Judd as any professional photographer.

Another victim of this dispute, totally innocent though, is a UK-based photographer named Lee Maxwell. I guess he heard enough about this that he posted a message on Facebook stating he is not the Lee Maxwell Judd character being covered in the news. 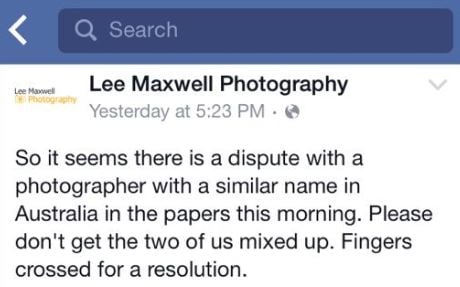 Not missing an opportunity to mess up again, the Australian photographer took a screen shot of Ashlea’s response to the above statement where she apologized for any hassles this story might have caused and posted it on his wall as if she had apologized to him. He posted it on his photography page as well. 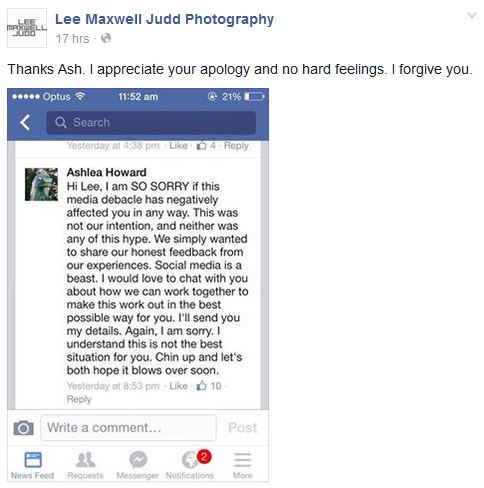 He then hit what might be a new low by sharing a link to the UK-based Lee Maxwell and suggesting it might be another hacker behind that page.

At this point I’d like to take a step back and say that every story has two sides, and perhaps (as unlikely as it may be) the photographer did not provide the terrible service he has been accused of and maybe the photos weren’t so bad. We do not have 100% of the information, and it is less relevant in my opinion anyway.

This post was intended to convey a message more than it was to report this as a news item, so let’s take a look at what we can all take away from the dispute as it has been presented:

Photographers – if you are customer-facing, the way you behave and the service your provide can be just as important as your photos. Chances are you’re not so incredibly talented that you can afford to be a complete ass and still have your clients begging you do work for them again.

Clients – like I said above, you get what you pay for. I will say that I’ve seen a few uniquely gifted photographers working for way lower fees than they should, but that’s a simple case of bad business skills. I’ve also seen the complete opposite.

There are also some good hobbyists out there that might provide excellent service and great photos, but they are the exception.

I do not know how much the couple paid the photographer in this case, but I assume he was one of the cheaper (or cheapest) options. Even if they paid a hefty sum of money, they still paid for a professional (builder) who is actually only a hobbyist photographer.

If you pay for a hobbyist, expect to get one. This means your photographer will probably be less experienced, less talented, less professional (duh…), won’t have the ideal tools of the trade, might miss the important moments and worst of all – when things go south, he can afford to say he doesn’t really care. After all, he’s got a “real” job waiting for him.

Remember, sometimes cheap is the most expensive.

[via The Daily Telegraph]

After a fall in his workshop, this creative builder shows us how he made his own DIY light stands

How to find great portrait locations even in the ugliest neighborhood