Last week we shared a story about a photographer that employs a pretty unique process to her film. (Spoiler alert: she pees on them.) Now we meet a french photographer that uses an even more eclectic method to create his images. Rather than using chemicals and paper or a digital darkroom, Lia Giraud grows his photos using light sensitive micro-organisms as part of his Cultures project.

Using a process he dubs algae-graphy, Giraurd places petri dishes that have micro-algae and a chemical nutrient base on them into a wooden box which he uses to “expose” the images. To do this, he projects a picture onto the dishes and, over the course of four days, the cells react to the light and form the image. 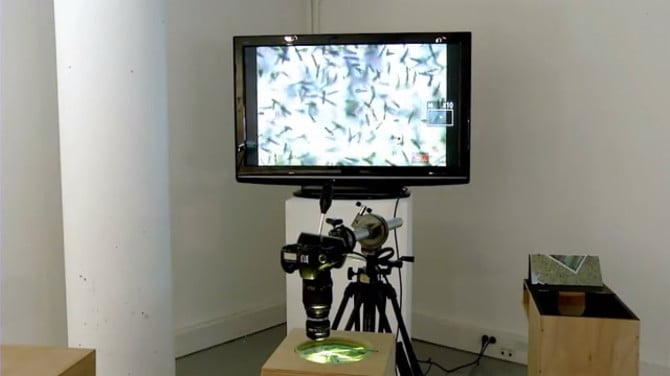 The setup used to create the “algaegraphs” is able to grow an image in 4 days.

“They are created by micro-organisms able to capture the light and “develop” pictures on a similar principle to classic photography. Upsetting the definition of “still image” usually given photography, the algae-graphs are mobile, autonomous, organic …”

This photographer creates prints with algae