A viral video titled ‘How not to be a photographer at a gig’ has been circulating lately showing photographer Aelle Lucà in a concert wildly waving his camera at the band on stage. 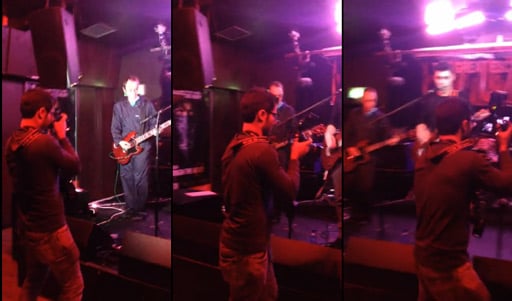 The movie uploaded by one of the audience shows their uncomfortableness with the situation, and what apparently seemed weird (or unfamiliar at least) form of photography.

The photographer was asked to stop by the first band on stage, The Cortege. He later continued to shoot as another band came on stage Sleeper Effect.

The movie turned into an onslaught against Aelle, gathering over 165 comments most are heavily on the (unbelievably) negative side.

Both the photographer and the band responded on the comments thread for the movie. Here is Ealle’ comment followed by the band’s

It is finally to for me to say something as I have been offended so much in? the last 2 days from conceited/arrogant people.

1) The band ask for photos

2) I asked them explicitly to them if there were any problem with a MASSIVE use of flash (answer was: “Do what u want”!)

We would like to say that Antonio asked us beforehand whether we minded if he got right in there, using flash and getting on stage. we said not at all. This guy has style and we very much respect his work. Most of us in the band have been gigging and worked in live music for over 15 years and have seen countless flat, boring photos. Some of you may not agree with this style but the results are fantastic. Who is Jay Zee and what right does he have to say? how a photographer should behave?

Apparently Aelle was shutter dragging for effect, and the photographs are quite good. Judge for yourself.

That said, I would love to hear your thoughts on this case.