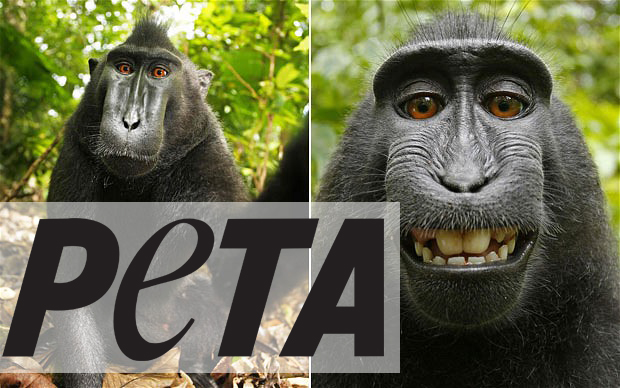 Remember the macaque monkey who snapped a few selfies that went wildly viral back in 2011?

While photographer David Slater and Wikipedia argued about whether or not the photographer owned the copyrights, and the U.S. Copyright Office also chimed in, there’s now a third party involved – with an entirely new claim.

PETA (People for the Ethical Treatment of Animals) has filed a suit in a San Francisco federal court claiming that the monkey should be recognized as the legal copyright owner, and requested permission to administer the proceeds for the benefit of the monkey and his friends.

Global News reports that the animal rights group is seeking a court order allowing it “to administer all proceeds from the photos for the benefit of the monkey, which it identified as 6-year-old Naruto, and other crested macaques living in a reserve on the Indonesian island of Sulawesi”.

The famous photos were taken back in 2011 when nature photographer David Slater travelled to Sulawesi for a book he later published, titled “Wildlife Personalities”.

Slater set up the camera and tripod, but the fact that the monkey ended up posing and pressing the shutter button led several outlets, including Wikipedia, to use the photos freely and claim that nobody owns the copyright.

While Slater continued to insist that he should be granted the rights to the photos, adding that the British copyright he was granted should be accepted worldwide, the U.S. Copyright Office updated its policies last year, much to his disapproval.

The update stated that the U.S. Copyright Office “will not register works produced by nature, animals, or plants”.

So, keeping in mind the Copyright Office’s updated policy, how does PETA plan on obtaining copyright on behalf of the monkey?

Well, PETA lawyer Jeffrey Kerr claims the policy “is only an opinion” and adds that the U.S. Copyright Act does not limit copyrights to humans. “The act grants copyright to authors of original works, with no limit on species,” he said. “Copyright law is clear: It’s not the person who owns the camera, it’s the being who took the photograph.”

Basing the suit partly on Slater’s story of how the photo was taken, PETA’s lawsuit argues that the monkey “authored the monkey selfies by his own independent, autonomous actions in examining and manipulating Slater’s unattended camera.”

The Copyright Act might not state it applies only to humans, but as far as I know it doesn’t imply anything about non-humans being able to own copyright either. I think it’s safe to assume that nobody thought about the issue back then, and I doubt it was intended to allow animals to own copyrights, but that’s just me…

Slater is said to still be exploring legal action against those who used the photos without his permission (and without paying him), but if PETA gets its way Slater could be charged for using the photos himself.

The photographer did not comment on that possibility, but he did say he is “very saddened” by PETA’s lawsuit. After all, he considers himself an animal rights advocate as well and has been using the photos to raise awareness and funds for the Sulawesi monkeys.

While PETA says it “has a very strong case” and Michigan State University law professor David Favre says the issue they raised “is a cutting edge legal question” and that they have “a fair argument”, not all animal rights advocates are impressed with the controversial move.

“It trivializes the terrible problems of needless animal slaughter and avoidable animal exploitation worldwide for lawyers to focus so much energy and ingenuity on whether monkeys own the copyright in selfies taken under these contrived circumstances”, said Harvard law professor Laurence Tribe.

Other law experts seem to think this suit has slim chances of getting anywhere, but PETA is not a stranger to such cases. Back in 2011 it filed a lawsuit against SeaWorld parks claiming a violation of the U.S. Constitution’s ban on slavery over the way five killer whales were being held in captivity.

Whether you’re a fan of PETA or think they’re a PITA, this will no doubt be an interesting case to follow.

One person who will definitely be interested in the outcome of PETA’s suit is Christian LeBlanc, whose GoPro was used to capture the world’s first elphie.

« Brooklyn Photographer Uses Photoshop To Make A Point About The Use Of Photoshop
iPhone 6s accidently delivered early; see how the camera performs »