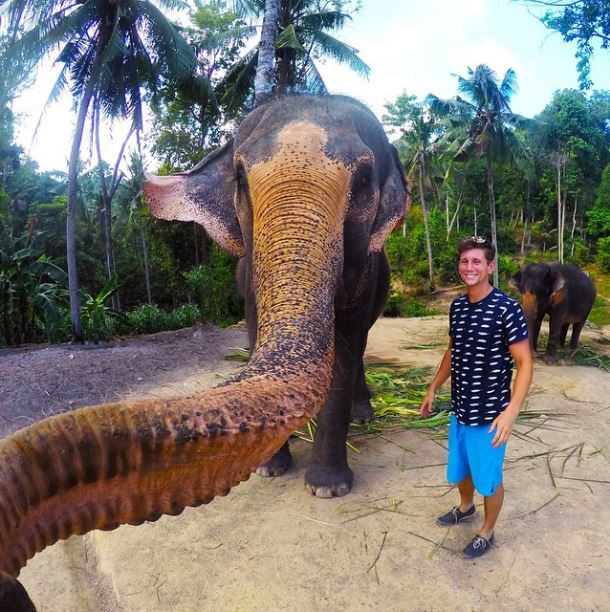 Just when you think you’ve seen every possible form of selfie comes along an elephant and shows that you ain’t seen nothing yet.

Christian LeBlanc was feeding elephants in Thailand and when he ran out of food, the gentle giant took his GoPro instead. Luckily, the elephant aimed the camera at himself and his guest rather than trying to eat it as well.

This photo awakens a copyright dispute instigated by a monkey whose selfies went viral.

LeBlanc and his girlfriend were visiting the Thai island of Koh Phangan when they came across the elephant photographer (photographant?), and while the photo was taken two months ago, it’s now getting the media’s attention worldwide.

Apparently the GoPro was set to ‘time lapse’ when the elephant took over, LeBlanc told Global News. “This allowed the camera continuous shooting and enabled it to take the ‘elphie’! Couldn’t believe it when I saw how well the photo turned out”, he added.

LeBlanc certainly got the photo of a lifetime, but the photo has also brought up once again the question of who, if at all, own the copyright for such photos.

The issue first arose when photographer David Slater uploaded photos from his 2011 trip to Indonesia, including some of a Celebes crested macaque who grabbed the camera and snapped a few hilarious selfies.

Wikimedia refused the photographer’s request to remove the photos from its website, claiming that since the monkey pressed the shutter Slater doesn’t own the copyright.

Eventually the U.S. Copyright Office chimed in stating that it “will not register works produced by nature, animals, or plants”. 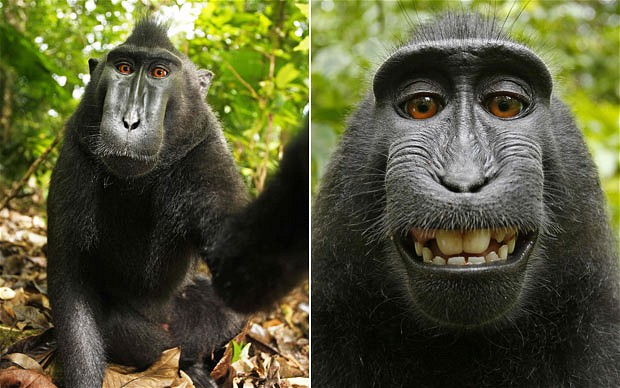 The selfies captured with David Slater’s camera. But does he own the copyright?

Interested to see how the media treats the ‘elphie’, I searched for the photo on several news websites and they all either credit LeBlanc for the photo or embed it from his Instagram account. A couple have mentioned in one way or another that he owns the photo, but they most likely meant to say he possesses it and weren’t necessarily thinking of the legal aspect.

As for LeBlanc, probably not thinking “legalese” either, he mainly sounds happy to have the photo and a great souvenir from the trip.

In what might work against him should he attempt to claim he owns the copyright, LeBlanc said that “I got the selfie of a lifetime, which I can’t take full credit for”.

“Elephants are incredibly intelligent and it definitely makes you wonder if it was a conscious action”, he concluded the experience, and I can’t help but wonder if the photo’s popularity will lead to elephant parks across the region training their animals to take photos of tourists.

LeBlanc has since captured a selfie with a whale shark (the lazy fish didn’t offer to take the photo this time), but he will forever be remembered as ‘the guy in the ‘elphie”.

[via Global News via Indian Express]

Wikimedia: Because the Monkey Pressed the Shutter, It Owns the Picture