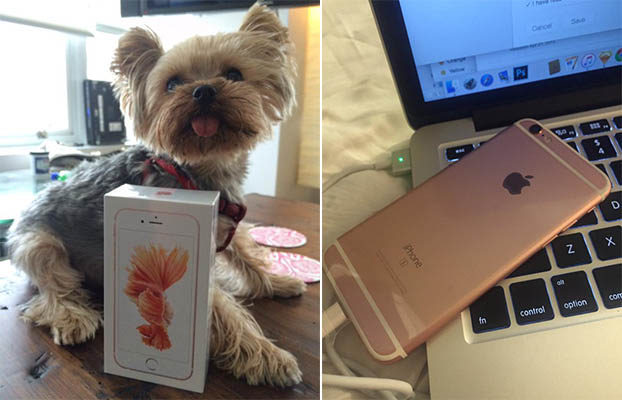 A lucky woman from San Diego received her iPhone 6s almost five days before the official launch date, possibly making her the first person in the world to get it.

Visual designer Adrienne Alpern was pleasantly surprised by the early delivery and shared some photos and 4K video for the rest of us to see how the new camera performs.

I can’t say the video blew my mind, but one could argue that the lighting conditions and the videographer’s skills were not up to par with the camera’s capabilities.

Twitter also can’t be the ideal viewing platform for such videos, so here’s another 4K video that was later uploaded to YouTube:

Those of you followed the announcement of the new iPhone and have seen the specs, know that the main camera has been bumped from 8 megapixels to 12 mp.

Below are a couple of photos Adrienne shared using the new and not-yet-available camera:

If you were expecting more from the iPhone, check out what photos can be created when placed in the hands of a professional photographer over at TIME, as it gave Benjamin Lowy the new device and sent him out on a helicopter above Manhattan.

Lowy said he was impressed by the quality of the images, “especially for such a small sensor,” adding that “when you print them, they hold up very well. There’s a lot of information there.”

The photographer also pointed out that autofocus and the dynamic range have been improved. “You don’t get over-sharpened images—a hyper-real sense of color that other phones give you,” he concluded.

If you’re wondering how Adrienne received her phone already on Monday, despite it not being available for purchase, MacRumors explains that it was due to a logistical error that often happens with new releases. It turns out that couriers such as UPS and FedEx receive the pre-ordered phones ahead of time and are asked by Apple to wait with the delivery until the day the phone becomes available in stores. As you can see, however, that does not always happen.

The happy iPhone owner has also sent some full resolution images to MacRumors, so head on over there to have a look and pixel-peep to your heart’s content.

Not leaving out the tech-geeks, Adrienne also posted the benchmark results, for those of your who might be interested:

Amazon leak iPhone 7 info a little too early. Confirms dual cameras in the 7+

This is how Sony 400mm f/2.8 GM lens performs for portraits