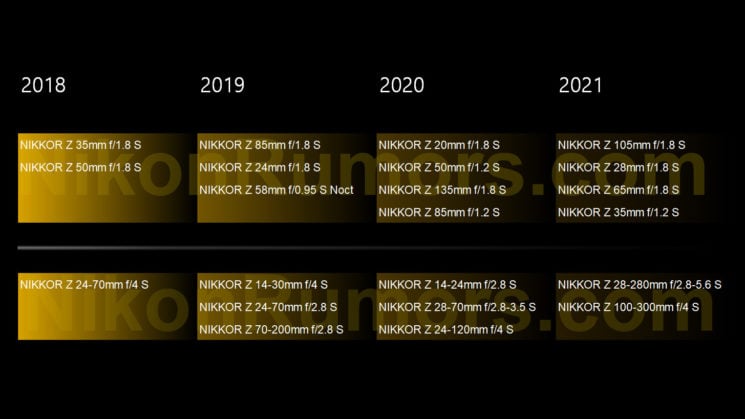 A new Nikon roadmap for 2020/21 appears to have leaked, according to Nikon Rumors. They have no idea if it’s legitimate, but the lenses are, as they say, plausible. With, perhaps the exception of one, which seems something of an odd decision to me. Overall, though, it’s a very healthy looking list that would round out the lineup quite nicely.

It almost tallies up with the previous official roadmap, although a leans appears to be missing from the 2021 list. Previously there were seven “TBA” items listed in the official Nikon roadmap, but only six lenses are listed in the new “leaked” roadmap. 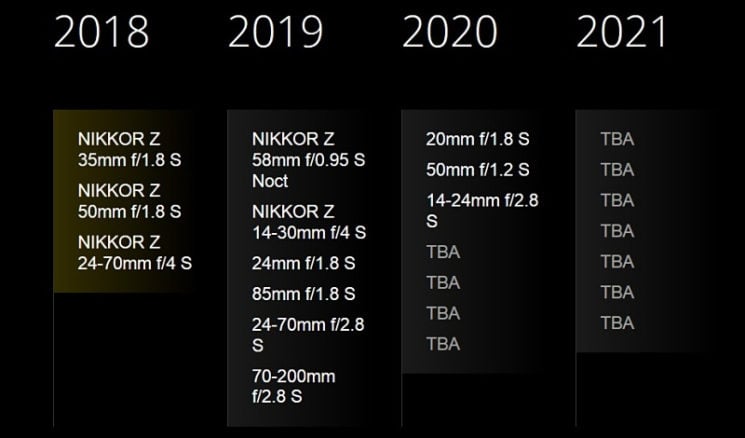 The only thing that looks odd to me on the newly leaked roadmap, and makes me question its authenticity is the 105mm f/1.8S lens. It seems like an odd choice to me, given that for F mount, the two main 105mm lenses are either the f/2.8 for macro or f/1.4 for portraits.

Given the obvious wide aperture advantages of the Z mount, surely a 105mm f/1.4 lens would make a lot more sense than an f/1.8 given what’s already out there? Sure, they could bring out an f/1.4 option as well at some point, but that doesn’t make sense to me, either. No doubt the f/1.8 will already be priced so highly that it’ll be cutting into f/1.4 purchases as a portrait lens, and I can’t see an f/1.8 version being a macro lens, personally.

But, this is Nikon. They’re the kings of odd decisions. So, perhaps they aren’t continuing the Nikon 105mm f/1.4 into Z mount territory and the list is legit. All we can do is wait for an official update from Nikon themselves.

« USB4 is coming, with a Type-C connection and 40GB/sec bandwidth
Five reasons why 24-105mm is a must-have lens for landscape photographers »