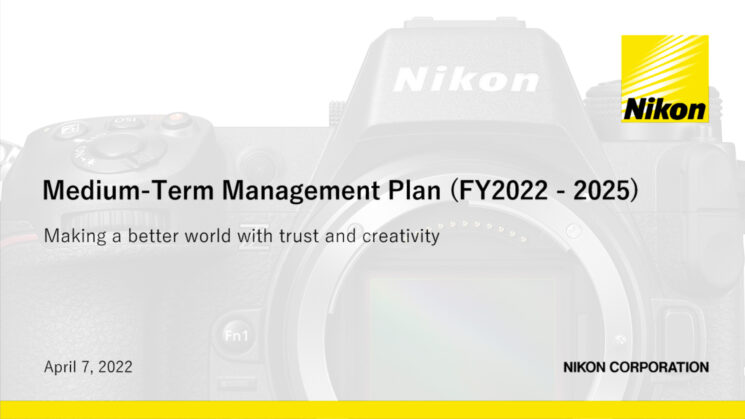 Well, it looks like Nikon’s following on from Canon’s lead with the lens goals over the next few years. Canon’s annual financial report and presentation said they want to release 8 RF lenses per year for the next four years (32 in total by the end of 2025) and now Nikon’s recently released “Medium-Term Management Plan” also sets its sights on a goal of 50 lenses in the Nikkor Z lineup by the end of 2025.

They also say that they want to have a “2+ lens attach rate” – essentially, they want Nikon Z mirrorless shooters to own at least two Nikkor Z lenses. They’re finally also planning to strengthen their video functions to try and better target the filmmaking crowd that seems to be obsessed with the Sony A7S III and Canon EOS R5/R5C as well as bringing Nikon Z9 features to their entire mirrorless lineup. 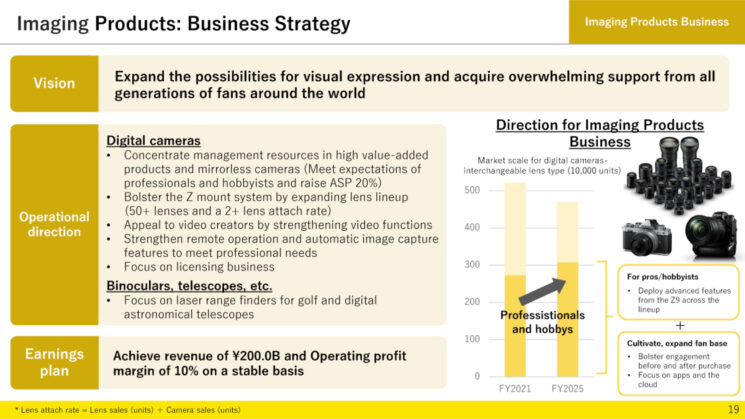 The report highlights a number of strategies that Nikon hopes to implement over the next few years in order to bolster its imaging business, which includes both expanding the lens lineup (which it seriously needs) as well as implementing advanced features from the Nikon Z9 “across the lineup”. Exactly what features they’ll be or which will be implemented in what level future bodies is obviously unknown at this stage.

But they’d better be some sweet features because the report shows that Nikon also wants to increase their average selling price (ASP) by 20%. This sucks for the consumer, obviously, but it’s pretty much to be expected these days after two years of a global pandemic and supply chain issues, not to mention the impact of the current war in Ukraine and sanctions against Russia raising fuel prices pretty much everywhere.

Nikon’s most recently published lens roadmap from January 2022 shows 34 lenses – with some of them blacked out for lenses that had been announced (or at least their development had) but hadn’t been released at the time. It also doesn’t include the recently announced Nikkor Z 800mm f/6.3 VR S, which would bring that current total up to 35. Next to Canon’s EOS R lens lineup, which was sitting on 26 lenses at the end of 2021, Nikon’s goal doesn’t seem that lofty in comparison.

Canon plans to release 32 new RF mount lenses by the end of 2025, so with 35 out of a goal of 50 lenses already announced for Nikon, that means they’re only going to be announcing another 15 in the same timeframe. Ok, to be fair, that’s at least 15 new Nikkor Z lenses as the report says “50+” and not an even 50, so we may see more. But they don’t appear to be setting their sights as high as they could.

It will be interesting to see exactly what new lenses are added to the lineup over the next few years, though, not to mention cameras. We’re still waiting for a good D500 replacement – or any indication if Nikon ever even plans to pursue a pro-level DX body in the future.

You can read the complete report here.

DJI agrees with need for Remote ID, but not how the FAA wants to implement it

Nikon’s next mirrorless lens announcement is likely to be the Nikkor Z 70-200mm f/2.8 S