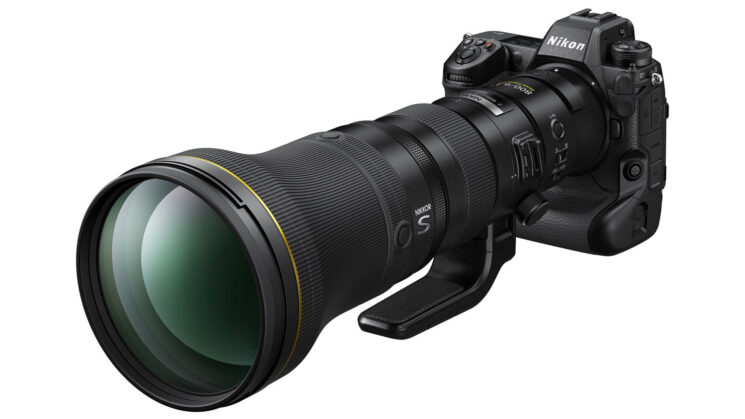 Nikon has announced its longest lens for the Nikon Z system to date, the Nikkor Z 800mm f/6.3 VR S. It’s relatively inexpensive, too, with a price tag of only $6,496.95 vs the $16,296.95 its f/5.6 F mount predecessor demands. Sure, it’s a third of a stop slower but for this kind of price difference, especially given high ISO performance increases of late, does that really matter?

The new super-long prime lens is obviously targeted toward sports and wildlife photographers, but as well as being a little lighter on the wallet, it’s also going to be lighter to carry, coming in at around half the weight of its predecessor, too. It’s also a few inches shorter and a little narrower, making it easier to fit into more bags.

The Nikkor Z 800mm f/6.3 VR S has an angle of view of only 3° 10′ and a minimum focus distance of 5 metres (or around 16 feet). The autofocus lens features up to 5 stops of Vibration Reduction (VR), which is expanded up to 5.5 stops when used with a compatible camera that has sensor-shift VR. It uses internal focusing with two synchronised drive units to keep the lens the same length throughout its focus range and you’ve got full-time manual focus override when you need it.

It’s compatible with the TC-1.4x and TC2x Nikon Z teleconverters to get an extended reach, but you will be losing one and two stops of light respectively with those. While an aperture of f/6.3 is only a third of a stop slower than the previous f/5.6 lens, that’s still going to push you down to a maximum aperture of f/9 or f/13 when you’re using them, so be sure you’re shooting in plenty of light or are using a camera that thas decent high ISO capabilities.

This relatively compact and lightweight lens features 22 elements in 14 groups, including a Phase Fresnel element, which Nikon says replaces several conventional glass elements, to compensate for chromatic aberration and colour fringing. It’s a hair over half the weight of its F mount predecessor, which tipped the scales at 4,590g. The new Z mount lens, on the other hand, weighs only 2,385g. That’s a pretty massive weight saving when you need to lug this thing around all day through the wilderness while looking for wildlife!

One particularly interesting feature of the lens is a sort of “focus recall” type thing that allows you to store a focus position and then instantly return to this position at will. Very handy if you’re stalking a specific spot from a static location but want to occasionally have a look around the environment, too. You can use your AF while following other subjects, tap a button and the lens has already focused to where it needs to be before you’ve even aimed the lens back towards your main subject.

As one would expect, it’s built to balance the centre of gravity around the foot on the tripod collar and features advanced weather sealing with rubber gaskets to prevent dust and moisture ingress. The front and rear elements also have a fluorine coating to repel dirt, moisture and oils to help keep them clean during a shoot and for easier cleaning when you’re in particularly hostile and dirty environments.