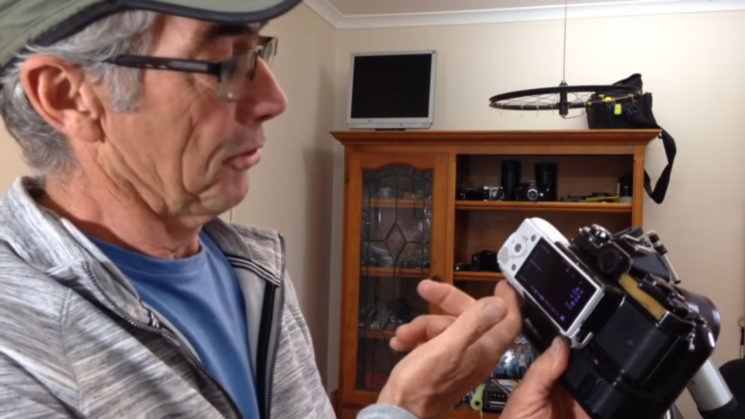 I’ve been following the “digital film” saga for years. There’s been at least 4 failed attempts to get one working, and one hoax. Nikon even filed a patent for one of their own at one point. But besides those early digital film hybrid cameras, none have ever really made it. At one time I thought this was an amazing idea that was bound to happen at some point. Now, I’ve pretty much given up on that ever happening.

There’s a multitude of problems with the whole idea, and no ideal solutions to most of them. But a photographer by the name of Robin Guymer actually seems to have cracked things to find a way that works for him. He’s repurposed an old Sony NEX camera into a digital back for his 35mm Nikon FE.

That first video went up in October last year. But now Robin’s put up another showing us how we can make our own. He also set up a website to detail the process, too.

The whole idea of making your own is a little bit mad, I think, but it’s still very cool. I’d toyed with the idea of trying to repurpose some other camera and bolting it onto the back of a film camera. But ultimately I knew I’d screw it up, as Robin says he did a couple of times, resulting in some dead NEXes. Good on him for sticking with it, though, and getting something that actually works.

Robin uses a stripped down NEX-3 as the whole sensor & electronics system. This is then attached to a modified standard film back for his Nikon FE. This allows the sensor to sit on the focus plane where film would normally reside. So, the lenses could still retain all their focus range.

He also removed the IR filter from the top of the sensor. This essentially turned it into a full spectrum camera. He mounted the filter back inside the camera, which can be removed when the mirror is locked up. This means that he can replace it with other filters, to use it as an infrared or UV camera, which is pretty cool.

It’s a little cumbersome, and the workflow isn’t quite as seamless as a DSLR. It’s probably easier to just get an adapter to mount the Nikon glass on the Sony camera. But it’s a start, and I’m sure Robin had a lot of fun experimenting and getting it to work.

You can find out more about Robin Guymer and his cameras on his website, and definitely go subscribe to him on YouTube. So far he’s only put out these two videos, but hopefully if there’s enough people interested, he’ll start doing some more.