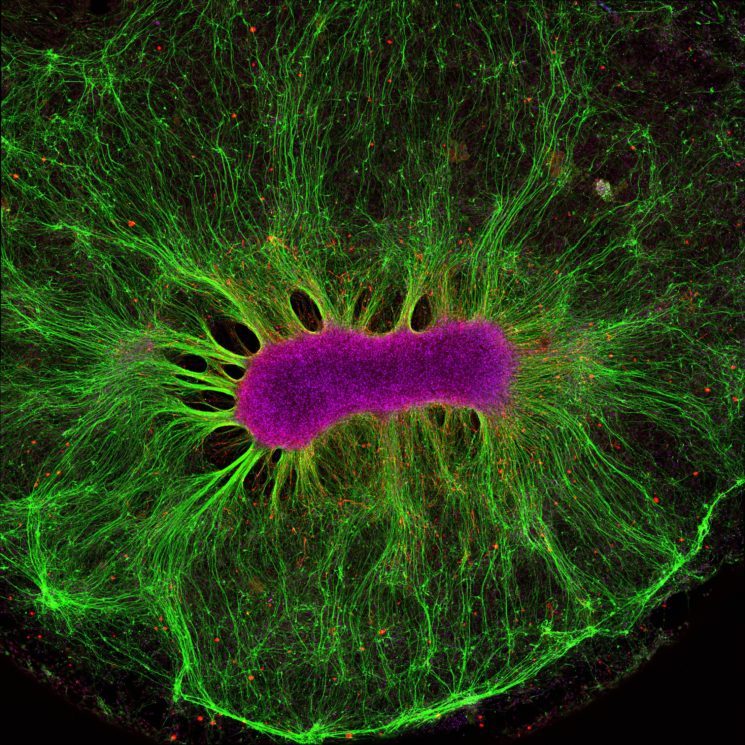 The Wellcome Image Awards has been celebrating science, medicine, and life for 20 years now. This competition connects science and art in the most wonderful way, and the finalists of 2017 competition have officially been announced.

The final images are both scientifically significant and incredibly unique and beautiful. Aside from conventional photographs, there are also images created by using CT scanning, 3D printing, tractography, confocal microscopy and so on. The overall winner and winner of the Julie Dorrington award will be announced on the evening of March 15th at approximately 9 p.m.

If you think medicine and biology can’t go hand in hand with art, these images might change your opinion. We’ve chosen a few of our favorites, along with the explanations of the images. So take a look, enjoy and be amazed. 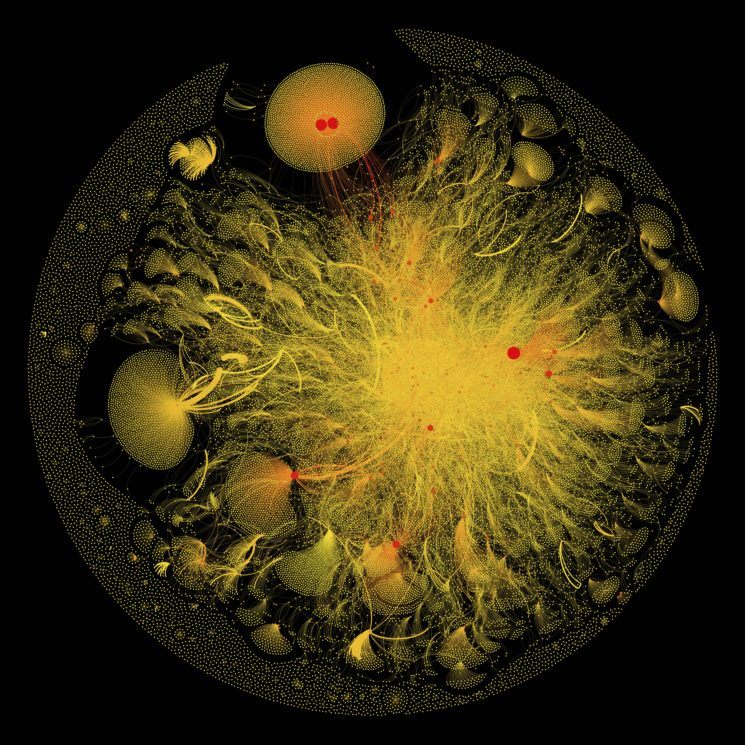 This is a graphical visualisation of data extracted from tweets containing the hashtag #breastcancer. Twitter users are represented by dots, called nodes, and lines connecting the nodes represent the relationships between the Twitter users. Nodes are sized differently according to the number and importance of other nodes they are connected with, and the thickness of each connecting line is determined by the number of times that a particular relationship is expressed within the data. The ‘double yolk’ structure at the top of the image indicates common mentions of two accounts. This area of the graph provides a graphical expression of trending data in Twitter, as it represents one tweet that was retweeted thousands of times. The image was created using computer analysis and graphical visualization.

Neural stem cells have the ability to form all the different cell types found in the nervous system. Here, researchers are investigating how neural stem cells grow on a synthetic gel called PEG. After just two weeks, the stem cells (magenta) produced nerve fibers (green). These fibers grew away from the cell due to chemical gradients in the gel, teaching researchers about how their environment affects their structural organization. The image was created using confocal microscopy. It’s a type of light microscopy that uses visible light (usually in the form of one or more lasers) to illuminate part of the object being viewed. 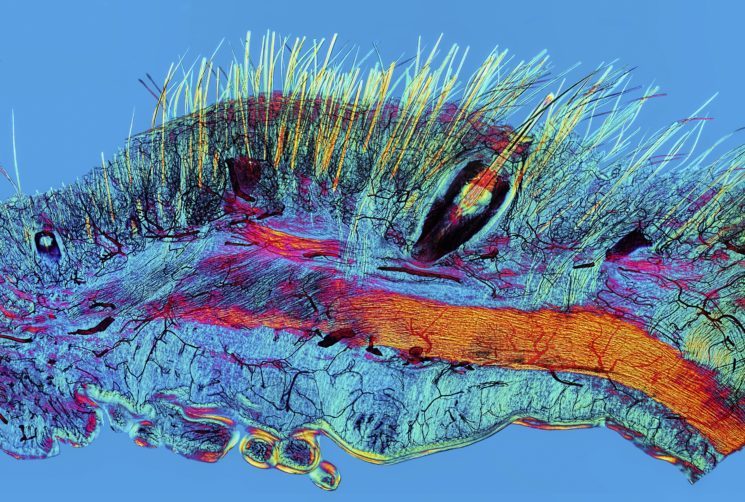 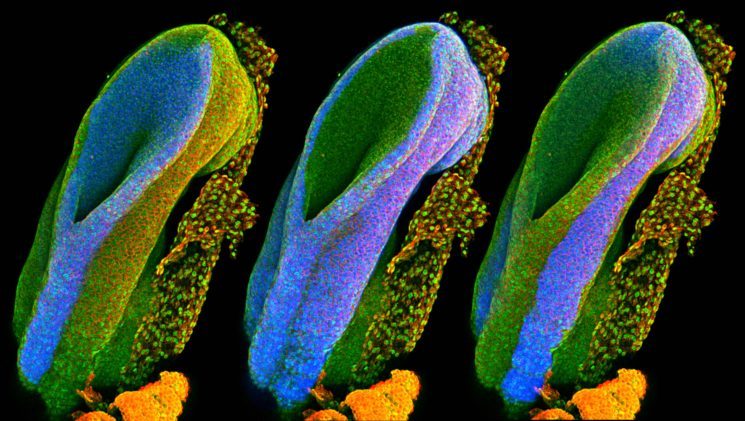 Our spines allow us to stand and move, and they protect the spinal cord, which connects all the nerves in our body with our brain. The spinal cord is formed from a structure called the neural tube, which develops during the first month of pregnancy. This series of three images shows the open end of a mouse’s neural tube, with each image highlighting (in blue) one of the three main embryonic tissue types. Confocal microscopy was used to create this image. 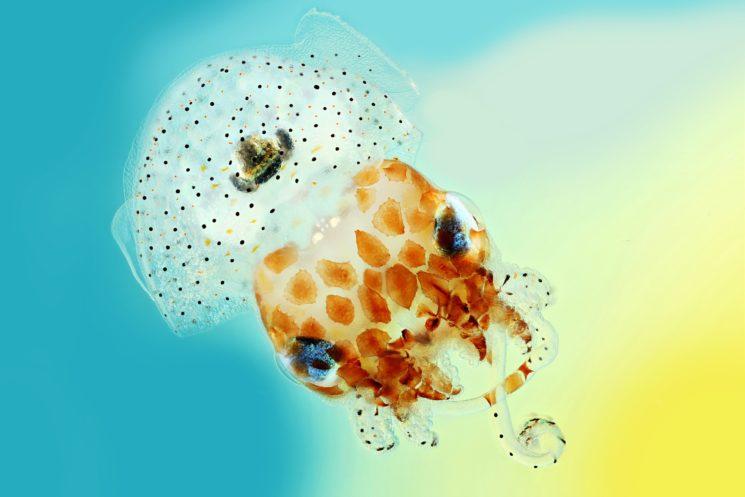 Hawaiian bobtail squids are nocturnal predators native to the Pacific Ocean. They have a light organ on their underside that houses a colony of glowing bacteria. The squids provide food and shelter for these bacteria in return for their bioluminescence.

This image shows a baby Hawaiian bobtail squid, measuring just 1.5 cm across. The black ink sac and light organ in the center of the squid’s mantle cavity are clearly seen. The image was taken using photomacrography (focus-stacked macro photos).

This image shows how an ‘iris clip’, also known as an artificial intraocular lens (IOL), is fitted onto the eye. An iris clip is a small, thin lens made from silicone or acrylic material, and has plastic side supports, called haptics, to hold it in place. An iris clip is fixed to the iris through a 3 mm surgical incision, and is used to treat conditions such as myopia (nearsightedness) and cataracts (cloudiness of the lens). This particular patient, a 70-year-old man, regained almost full vision following his surgery.

The technique used for this image is clinical photography. Photographing the human eye is extremely challenging: photographers have to use techniques to steady the eye’s constant movement. This particular photo is the result of one method within an area known as anterior segment imaging, which concentrates on the structures within the front third of the eye.

Language pathways of the brain 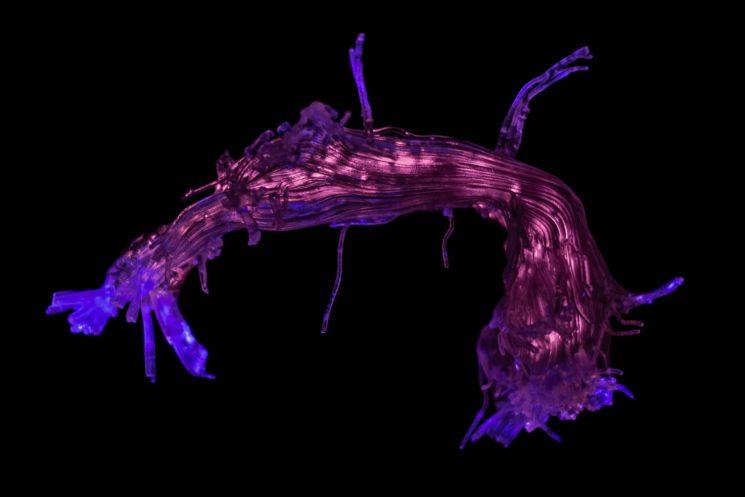 The brain is composed of two types of matter. Gray matter contains cells, and is responsible for processing information. White matter connects these areas of gray matter, allowing information to be transferred between distant areas of the brain.

Areas responsible for speech and language have been mapped to two different brain regions. This image shows a 3D-printed reconstruction of the white matter pathway connecting these two areas (here shown from the left) which is called the arcuate fasciculus.

The image was taken using tractography. To create this model, a map of the white matter pathway was generated using a type of magnetic resonance imaging (MRI) called diffusion imaging, which tracks the movement of water molecules. The data from the scan was used to create a 3D model made from clear resin, using 3D-printing technology. The 3D model was then illuminated using different colored lights to create this image. 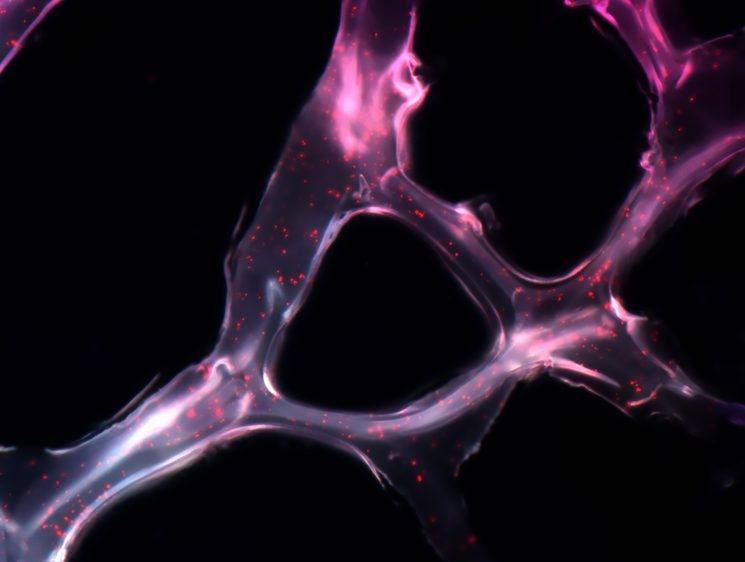 Short genetic sequences called microRNAs, which control the proper function and growth of cells, are being investigated by researchers as a possible cancer therapy. However, their potential use is limited by the lack of an efficient system to deliver these microRNAs specifically to cancerous cells. Researchers at MIT have developed such a system, combining two microRNAs with a synthetic polymer to form a stable woven structure a bit like a net. This synthetic net can coat a tumor and deliver the two microRNAs locally to cancer cells. 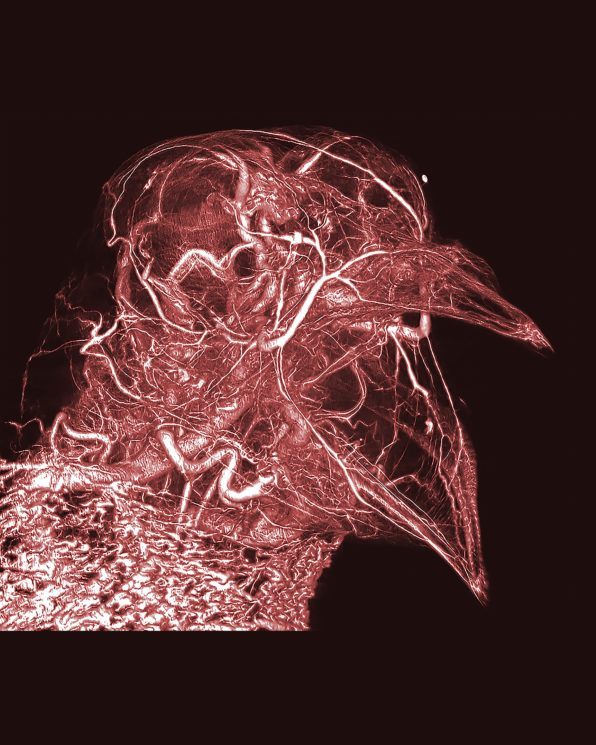 BriteVu, a novel contrast agent developed during the project, allows researchers to see the entire network of blood vessels in an animal, down to the capillary level. Images are taken from computed tomography scans. The intricate network of blood vessels in this pigeon’s neck is just visible at the bottom of the picture. This extensive blood supply just below the skin helps the pigeon control its body temperature through a process known as thermoregulation.

The image was created using computed tomography (CT) and digital imaging. CT uses X-rays to take virtual slices of the body to show the location of the blood vessels and the bones of the skeleton. The blood vessels of this pigeon were first injected with BriteVu, a novel contrast agent that causes even the smallest capillaries to be detectable by CT scan. CT image data was then compiled to produce the image shown here.

Surface of a mouse retina 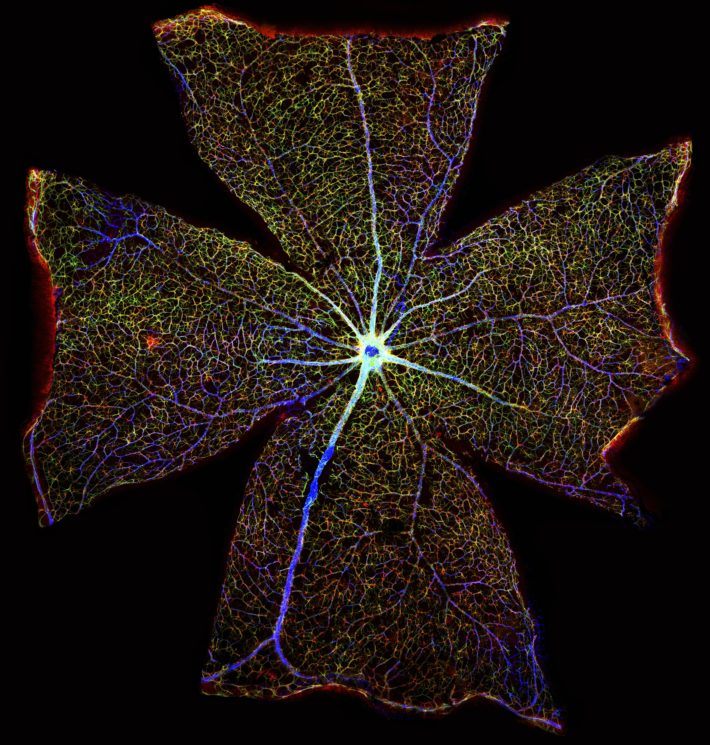 The retina, located at the back of the eye, contains light-sensitive cells responsible for converting light into electrical nerve signals that the brain can process. As a result of aging or injury, the retina can lose this function, causing vision loss. This image was created by digitally stitching together over 400 images to form one large image, so as to show the entire surface of a mouse retina.

Blood vessels (blue) can be seen radiating from the center of the image, supplying the entire retinal surface. Astrocytes, specialist cells of the nervous system, are double stained in red and green. The image was created using confocal microscopy. 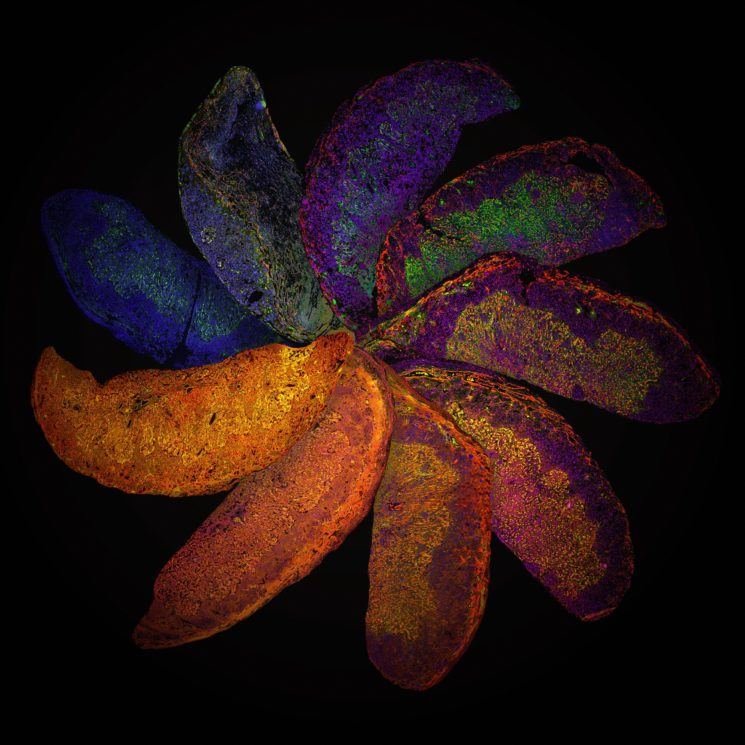 The Placenta Rainbow highlights differences in mouse placental development that can result from manipulation of the mother’s immune system. These placentas were investigated at day 12 of the 20-day gestation period – the point at which a mouse’s placenta has gained its characteristic shape but is still developing.

These placentas are from mice with genetically different immune systems, and have been stained for three proteins, represented in blue, red and green. Confocal microscopy was used to create this image. 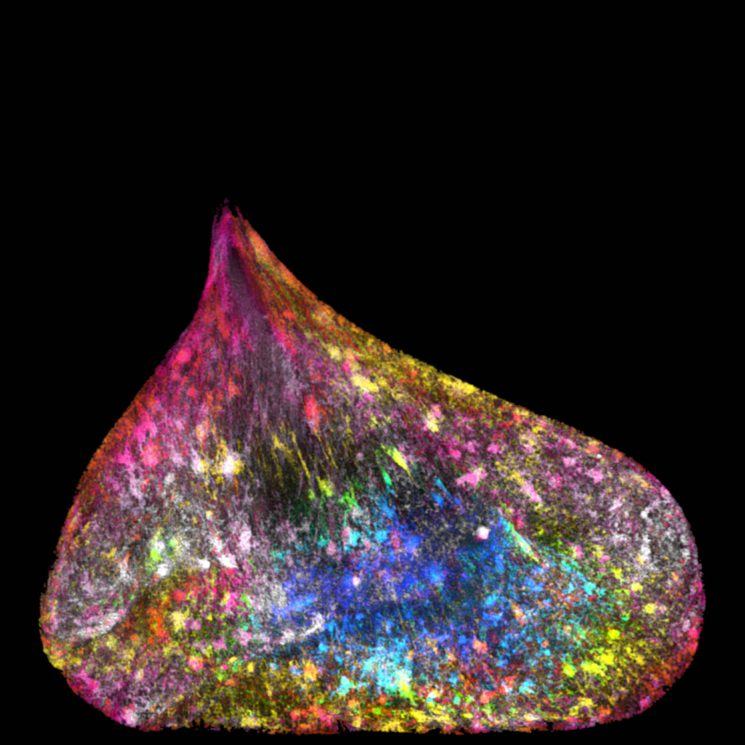 In order for plants and animals to grow and remain healthy, cells need to have the ability to replicate. During cell division, also known as mitosis, the entire DNA content of the cell is copied, with half going to each new cell. DNA is found in a region of the cell called the nucleus, which acts a bit like the brain. This picture shows the nucleus of one of two new daughter cells. The DNA in this cell has somehow become caught, and is being pulled between the two cells. This has caused the DNA to unfold inside the nucleus, and DNA fibers can be seen running through it. As the new cells have moved apart, the tension distributed by the rope-like DNA has deformed the nucleus’s usually circular envelope.

Super-resolution microscopy was used to create this image.

Vessels of a healthy mini-pig eye 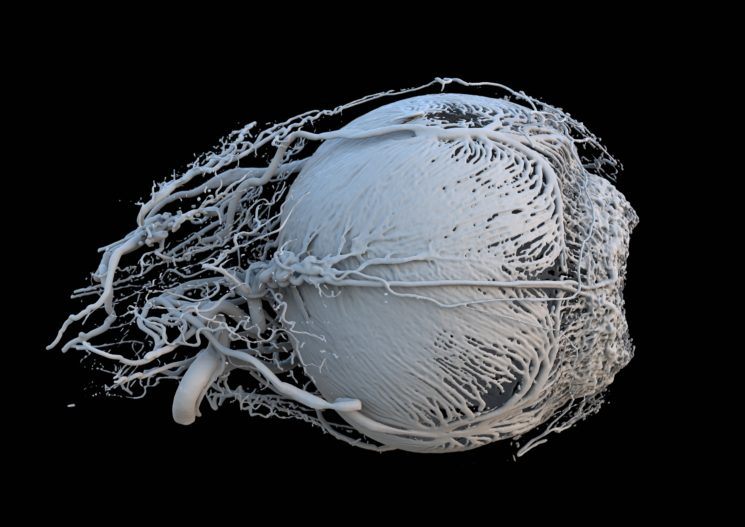 A 3D model of a healthy mini-pig eye. The dent on the right-hand side of the image is the pupil, the opening that allows light into the eye. The blood vessels shown are bringing energy and food to the muscles surrounding the iris. the image was made using computed tomography (CT) and 3D printing. Information about the blood vessels was gained by first injecting them with a newly developed, highly viscous contrast medium called Angiofil. A type of CT scan was then used to obtain a 3D image, which was then converted into a template for 3D printing. This 3D model is made from ABS, the same material as Lego, and took 39 hours to print. 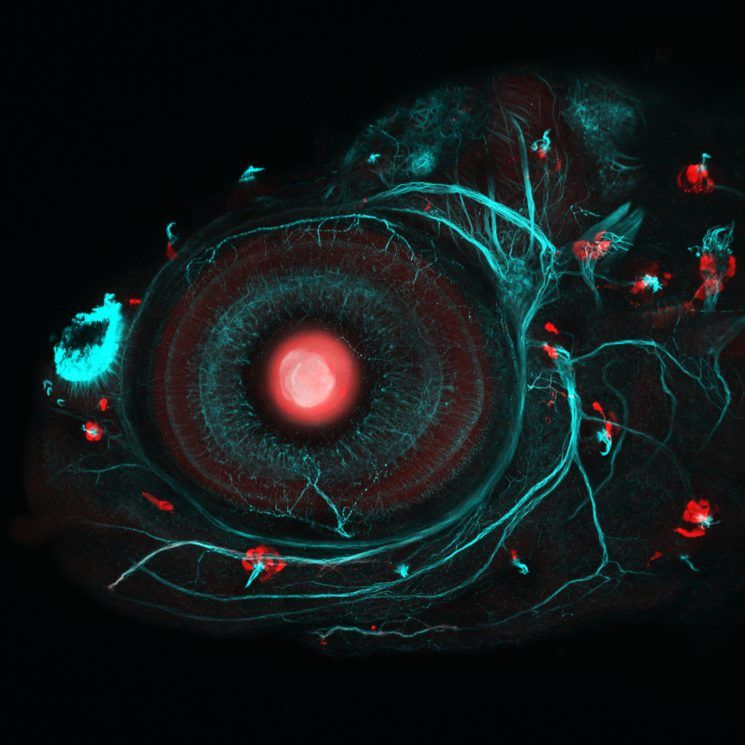 This four-day-old zebrafish embryo has been modified using two mechanisms – borrowed from the fascinating worlds of bacteria and yeast – that are widely applied in genetics research. A DNA-editing technology called CRISPR/Cas9 was used to insert a gene called Gal4 next to the gene that the researchers wished to study. These Gal4 fish were then bred with special reporter fish to create fish where the gene of interest fluoresces red whenever it is activated. The technique used was confocal microscopy.

Even though Wellcome Image Awards announces the winners on March 15th, you can have your vote by August 31, 2017. Choose your favorite image here, and you can win a print of one of the final images.

Exhibitions of the winning images will open from March 16,  2017 across the UK, Europe, and Africa. If you’d like to check out the rest of the images or learn more about exhibition venues and the competition itself, visit Wellcome Image Awards’ website.

The 2015 Wellcome Image Awards Will Spark Your Interest In Science