If you shoot video for long enough, and you’re interested in getting quality sound (you should be), then at some point you’re going to use a boomed shotgun mic. They’re not as easy to work with as you might first think, though. Bad technique can lead to the microphone picking up vibration and handling noise. It can also quickly get pretty tiring for the boom the boom operator, too.

In this video from Aputure, Ted Sim and Stephen Harrod provide six tips to work with boom poles on set. Some of the tips help to improve the audio quality. Others simply help you last for the duration of the shoot.

My own introduction to the video world was as a boom operator. I was a motion graphics designer, and I was occasionally sent out with the video crew to lend a hand. So, standing around with a boomed shotgun mic ended up being my usual task.

The microphones we were using at the time were the Sennheiser K6/ME66. I even bought one from the company when they swapped out to MKH416s. I still use it regularly today, and it’s often on a boom. Proper holding technique is vital to get the best sound and not tire yourself out in the process. 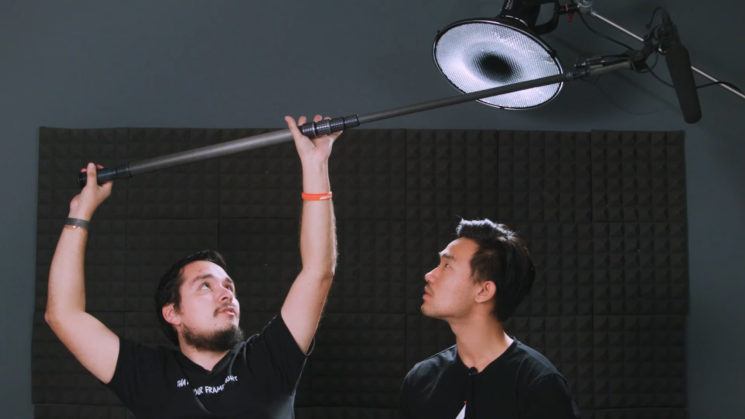 You’ll want to hold the pole loosely, so that you can easily rotate the pole in your hands as you or your subject moves. Holding it too tightly will make it difficult to turn smoothly, and can also introduce handling noise.

If you’re on a platform, or recording a seated subject, the “Bench Press” hold can be very useful. It’s similar to the “H” position, except your arms are more bent. This makes it a lot easier to hold for longer durations. You can also transition between the bench press and the H position to follow a subject going from seated to standing. Or, vice versa.

Scooping or under slinging

This is a common technique used when you have harsh lights in awkward positions. If you’re holding a mic above somebody’s head, it’s easy for it to get in the way of the light. While you want to get good sound, you don’t want to cast a shadow on your talent’s face.

This isn’t always possible, on a wider or full length shot, for example. But, if the framing cuts off below your subject’s chest, then scooping can be very useful.

Rest positions are just as important as your booming positions, and that’s what their three remaining tips are about.

If you’ve got a long pole and there’s a short break between takes, there’s no point folding the whole thing back up. But you don’t want to keep holding it up overhead and tiring out your arms, either. This is where the shoulder rest comes in. Make sure to rest it on the back of your shoulder blades, and not your neck, though. Otherwise it can start to get a bit sore if the break ends up being longer than expected.

The other option, is to simply put the end of the boom pole on your foot and hold it up vertically. You generally don’t want to put the pole straight down on the ground. For a start they can be dirty, but some poles have the audio cable from the microphone coming out of the end. Putting it on your shoe instead of the hard ground helps to soften the strain a little. If there is a cable coming straight out of the end, though, I’d personally be more inclined to go with the shoulder rest.

No, it’s not one of those 1980s Ghetto Blasters. It’s a box for holding your boom pole. Essentially, it’s a giant apple box with a hole cut in one end to accommodate the boom pole. If you stuff a pillow inside it, it’ll help to stop the end getting scratched up, and it’s definitely not going to fall over. Extremely handy if you need both of your hands free between takes. It’s a lot safer for the microphone than simply leaning it up against a wall, too.

While I tend to be on the camera more than a boom mic these days, they’re handy tips to know. Most of us rope our friends into helping out on shoots. So, if they’ve never used a boom mic before, though, these suggestions go someway toward ensuring decent sound. They can also help to prevent your friend from complaining that they’re tired halfway through the shoot.

« The Sony 85mm f/1.4 GM goes up against the Sigma 85mm f/1.4 Art in this side by side comparison
Finalist photos of Wellcome Image Awards show incredible science-related images »