Photo.net user Brendan Taylor could not settle the cognitive dissonance between his love for vintage cameras and his love for digital photography. The only resolution to this upcoming madness was to meshup two cameras a Nikon Nikkormat EL and a Sony NEX 5N. 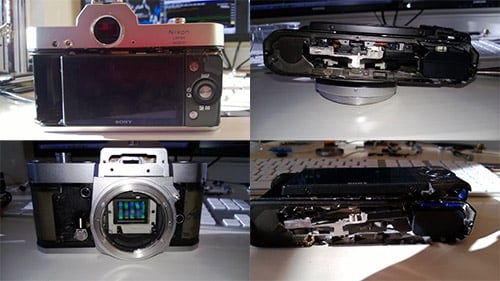 This allowed Brendan to keep the vintage look of the Nikkormat while getting access to the advanced features of digital photography, including the NEX’s touch screen.

Here is a bit about the motivation for the conversion:

“…the original idea was to transfer the innards of a Nex 5 into a non functional Leica M3. The focus peaking of the nex cameras is ideal for use in a rangefinder with old manual lenses, and thats key because there would be no communication between camera and lens. I quickly realized that it’s not possible without irreversibly mutilating both of the cameras, and I can just imagine the nightmares I would give to leicamen with pictures of an M3 with bits being hacked off by dremel! As a “practice” run I thought I would attempt it using an old Nikon Nikkormat EL I had lying around. Plus the extra room in an SLR might make my life easier… “

The meshed up camera is not fully assembled yet, but Brendan faced some interesting challenges wanting the camera to retain SLR functionality and it is interesting to see how they were/will be solved.

“The grip of the nex 5n is wider than the body of the nikkormat: 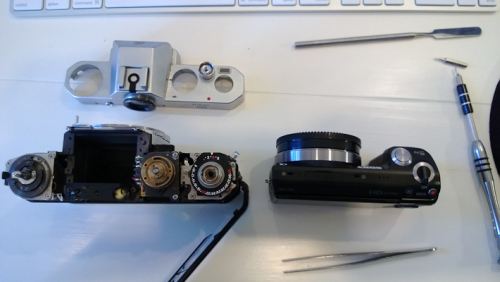 “… the
focus plane in a film camera tends to be almost right at the back,
wheres a sensor tends to be much further forward in a digital camera 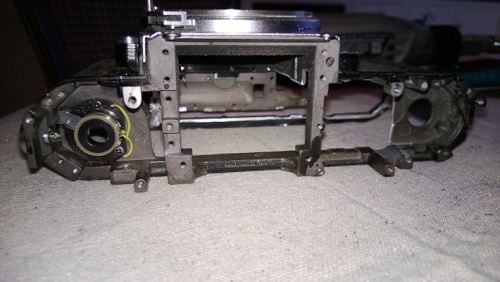 Conveniently, the accesory port for it EVF is exactly centered with the sensor, as in an SLR, so the EVF will fit perfectly 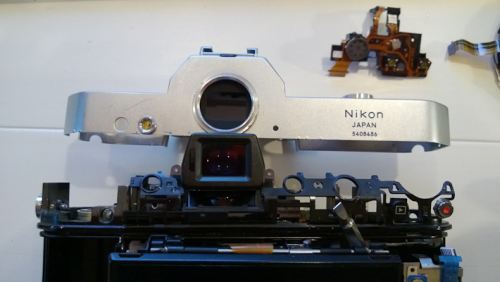 The camera is not completed and Brendan’s plan include weather sealing it, adding some leather and possibly making an interchangeable lens mount. The progress on this unique camera can be tracked on Branden’s G+ Sonikon NikkorNex album.

NEX-7 With a 140mm f1.8 Projector Lens Makes The Most Beautiful Photos