It is one thing to have your photo taken in public. It is a whole different thing to have multiple photos of you taken in public, tagged and stored in a way that enables search. Think facebook image tagging crossed with images streaming from ATM machines, street cameras and security cams. Sounds scary right?

According to Professor Isao Echizen from Tokyo’s National Institute of Informatics there are ways to avoid constant tagging of your face. One such way is to constantly tilt your head. Another less pain inducing option is to use a pair of glasses designed by Prof. Echizen specially designed to disable face recognition.

The mechanism behind the glasses relies on the fact that camera sensors are sensitive to light undetectable by the human eye. While us humans can see on the… well… visible spectrum, CCD and CMOS sensors have a wider gamut including a bit of infrared and a bit of ultraviolet. (If you need proof, try pointing your TV’s remote at your camera and see what happens)

The glasses are equipped with LEDs around the glasses frame that emit near Ultra red light, detectable to cameras, but unnoticed to the human eye. The current configuration powers the LEDs with a small battery placed in a pocket. 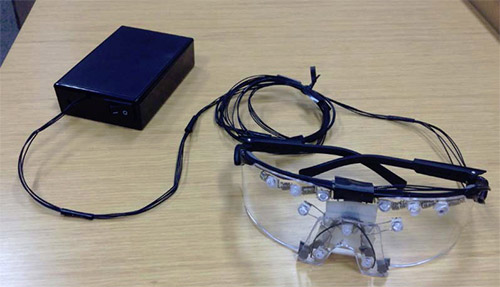 The camera is then blinded by the light and can not see any facial features. 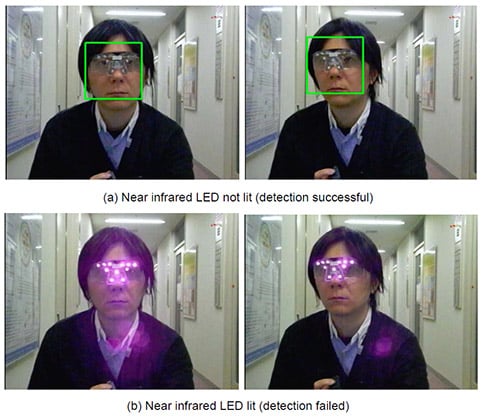 Then again, wearing such hideous glasses may be enough to turn of people from taking your photo.

P.S. If you want to absolutely block cameras from taking your photo, check out these three ways to avoid being photographed.

How to avoid glare when shooting portraits of people wearing glasses