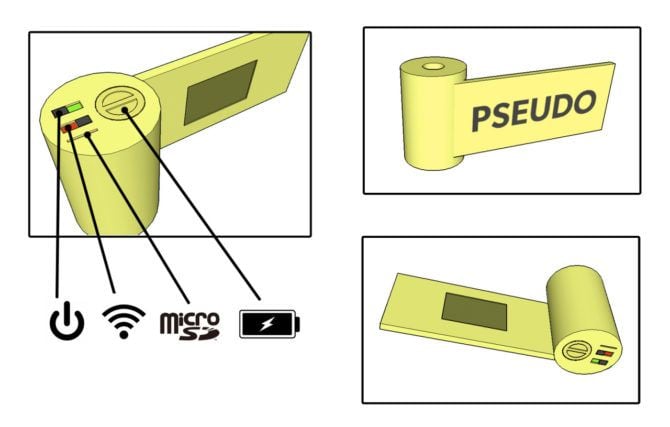 I’d love nothing more than to be able to slap a digital sensor into my old mechanical film bodies and wander off doing some street photography.  So, I’m trying really really hard to get excited about this one, but the lessons of the past have taught us to not get our hopes up.

The PSEUDO Film Canister plans to succeed where the previous attempts have failed and finally allow us to shoot digitally with our 35mm film bodies.

It’s a product that’s generally considered to be vapourware, with a lot of past promises that never came to fruition, due to the technical issues that plague this type of device.

It’s been well over fifteen years now since SiliconFilm attempted to bring such a unit to market, when DSLRs were just beginning to reach the quality of 35mm film, and many photographers were worried about the big investments they’d made in their film cameras.

It was an ambitious goal, and this first idea replaced your camera’s back door with a complete digital back.  I was especially excited by this, because the camera I was shooting at the time, the Nikon N90s, was one of the cameras listed as being guaranteed to work with it.

Fast forward to 2011, and the announcement for the RE-35 came along.  With 4, 8 and 12MP flavours, being able to fit into any 35mm analogue camera, and the ability to shoot raw, it seemed too good to be true.

It turns out, that it was.  The whole thing was a hoax.  The RE-35 never existed, and was created only as “an exercise in identity-design”.  They assumed the April 1st press release would clue people into this fact, but apparently not.

A little while later, in 2014, we had a couple more contenders.  The DigiPod actually managed to raise over £15,000 (around $21,600) before the IndieGoGo campaign was cancelled, somewhat short of its £199,000 (approx US$290,000) goal.  If nothing else, at least the DigiPod presented us with some sample images to show proof of concept.

The FrankenCamera II also fired up that year, attempting to bring a digital conversion kit to the Leica M3.  While a proof of concept was created using a Konica Auto S3, the relatively limited audience of Leica M3 owners who wanted to shoot digital, pretty much spelled doom from the start.

So, what about PSEUDO?  Unlike SiliconFilm and FrankenCamera, PSEUDO isn’t being designed as a replacement back for your 35mm SLR.  It’s a drop in replacement for a film canister, much as DigiPod was supposed to be, meaning that you’ll be able to use it with pretty much anything.

There’s even a concept mockup of the PSEUDO showing how it will fit into your camera. 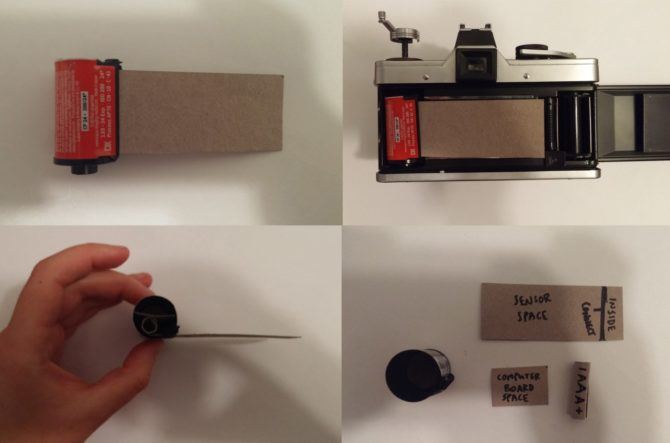 Camera technology has certainly come a long way since the days of SiliconFilm, and with sensors getting better and cheaper, now seems as good a time as any to give this concept another go.

With a goal to keep things as simple as possible, early specs have been released, along with the issues that may be faced.

They don’t forget to mention the biggest hurdle, the shutter release button.

This means, that something will be needed to trigger the digital sensor taking the photo. I am looking into audible feedback from the sound of the shutter being engaged. But there are a number of ways to go.

I have a feeling that audible sensors will simply be too slow to react, especially with something more modern and quiet like the Nikon F100 or F6.  While my Nikkormats have a fairly substantial clunk, my N90s is also pretty quiet.

It’s a problem, for sure, and one that many of the other projects failed to solve without attempting to physically alter the shutter of the camera (which defeats the purpose of an insert you can use with any camera).

Like I said at the start of this post, I really want to get excited about this one, but I also don’t want to set myself up for disappointment, again.

However, I’ll be keeping a close eye on this project, and absolutely wishing them all the best.  It’d be great to finally see somebody crack this one.

You can find out more about the PSEUDO Film Canister on their website, and see the project over on IndieGoGo.

What do you think?  Are you as excited as I’d like to be?  Or do you think the “turning a film camera into a digital camera” ship has long since sailed?  Let us know your thoughts in the comments.

These pseudo-still life photos will make you feel incredibly anxious

« Quiz – can you match the lens to the flare it creates?
Here is how to composite around the world, get free LUT sets and win a 30% discount »