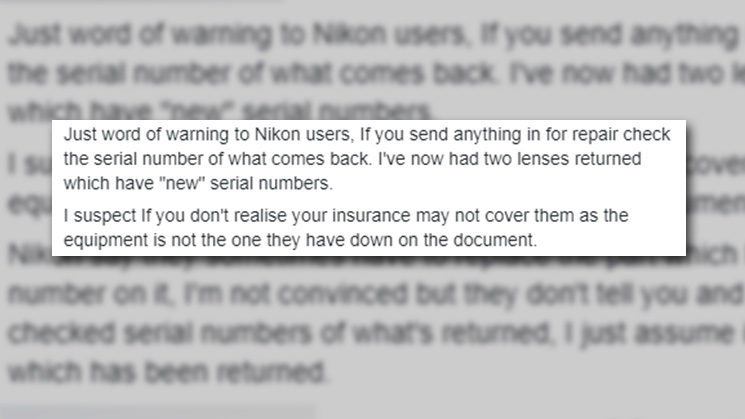 So, this is an interesting one and not something I’ve come across before. But a British photographer we spoke to reports having had serial numbers in his Nikon lenses changed after sending them in to be repaired by Nikon Professional Services in the UK.

He says that Nikon told him they sometimes have to replace the part which contains the serial number. However, this may invalidate your insurance or future warranty when numbers no longer match up. Especially if Nikon isn’t providing any documentation for the new number or even telling you that it has a new one. 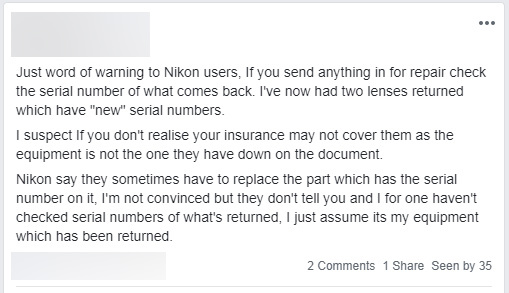 This particular Nikon shooter took to Facebook to post about the topic in a group I’m in. After I saw it, we sent him a message to find out a little more about exactly what had happened.

The two lenses he mentions in his Facebook post were both sent back to Nikon at different times. The first one was about six months ago. While he normally doesn’t look at returned repair items this closely, due to the nature of the original damage, he spotted that the serial number was different to that which he’d sent in.

The first repair was about 6 months ago, the lens came back but due to the problems I realised the serial number had been changed. It turns out that Nikon sometimes have to replace the part of the lens with the serial number stamped on it, but they seem to forget to tell you, hence you don’t know they have done this.

He discovered at the time that Nikon sometimes needs to replace the part which contains the serial number. Of course, they don’t tell you that they’re doing this. Nor, apparently, do they provide any updated documentation for the new number that is assigned to the lens.

Now, this photographer checks all repairs with much more scrutiny, particularly the serial number. So when the second lens came back more recently, he gave it a good look over. When he noticed that this, too, had been returned with a new serial number, he contacted Nikon directly. This is what he told us.

After speaking to Nikon they were adamant they hadn’t changed it, however after some research they have told me the changed it back in 2015 during another repair! All this time I had been insuring a lens I no longer owned. I will now have to go through all my kit and see if I have any serial numbers Im not expecting!

Nikon cameras and lenses typically contain the original serial number somewhere on the box or the documentation contained within when you buy it. Some reatilers even print the serial number on the receipt, too. So, for the purposes of insurance, future warranty repair, or resale, if the numbers don’t actually match up, there may be some issues.

Many insurance companies, especially for commercial gear insurance, require a list of serial numbers for your equipment in the event something is damaged, lost or stolen. So, if the number on your lens match the number on your documentation, you might not have a claim at all. After all, it’s not like insurances try to give you money. In fact, they often do everything they can to get out of paying on claims.

And this wasn’t just regular Nikon consumer repair, either. This user is a Nikon Professional Services (NPS) customer – customers who Nikon claim to hold in high regard.

Fortunately, I’ve been quite lucky with my Nikon gear. I’ve not had to send anything in for repair. I’ve not had anything break while it was still able to be repaired The popup flash died on my D200 a couple of years ago, and they no longer have the parts to repair those. But, also, it’s a popup flash, so who cares? But I’ve heard quite a few horror stories regarding Nikon’s customer service over the years, especially in the UK.

So, if you’re sending any gear to Nikon for repair, or any other manufacturer for that matter, make sure to get photos of the serial numbers before you send them in. And then double check that they’re the same serial number coming back to you.

If it’s not, do contact them and find out why – and don’t forget to update your insurance if it does come back different, or you might be paying for kit coverage that they think you no longer own.

Nikon no longer offers international warranty for lenses and accessories