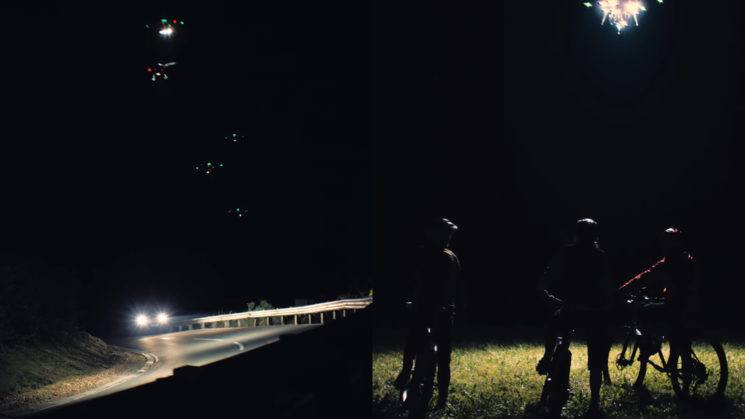 British insurance company Direct Line is getting into the drone business. More specifically, they’re getting into the “mounting lights on drones” business. Ok, so this isn’t entirely photography related but it does hold some cool potential for photographers. Direct Line have teamed up with a bunch of drone experts to come up with what they’re calling Fleetlights.

The idea is to help aid people in dark situations. Walking home late at night through areas where there are not streetlights. To aid with police response and accident investigation in the middle of the night, and other such activities. Need some illumination? All you need do is whip out your phone, load up an app and request some light. The nearest available drones will head on over to meet you and light the way.

As I said, this isn’t exactly entirely photography related, but it does present some pretty cool innovation and ideas. The Fleetlights service is made up of what they call a “swarm” of interconnected drones. Each is equipped with high power, high efficiency on board lights and can be summoned on demand from your phone.

When you hit the button, a signal is sent to the Fleetlights HQ and then the drones are sent out on their mission to assist you. GPS data is sent from your phone to the drones, so that they always know where to find you. So, you don’t have to hang around and wait for them if you don’t want to. You can start off on your journey, and they’ll eventually catch up.

Upon arrival, they will get into formation and a “lead drone” will communicate with the other drones to tell them what to do and where to go. The lead drone is also the one that talks to the device the user is holding. It’s the ultimate in “follow me” mode drone technology. Of course, it’s not shooting footage, it’s flying lights around.

Direct Line posted another video on how the technology behind Fleetlights was created.

The lights used are Fiilex AL250 drone lights, which were originally designed for photography and video production. You might remember we showed you those a few months ago being used to light paint mountains, as well as illuminate a movie set.

The whole project is based on opensource hardware and software. Based around the Pixhawk flight controller, there are two drones. the S650, which is a quadcopter and the S900 which is a hexacopter. There were some technical challenges to overcome, especially when it came to speed and accuracy.

Whether the mobile communication side of things will also be released as opensource remains to be seen. It would be very cool to just tap a button and have a bunch of drones fly up in the air to light my scene and follow my subjects, though. If you need a bit more power, you can always go the DIY route.

The announcement has received mixed responses from the general British public. Some thing it’s an amazing step towards safety. Others are wearing their tinfoil hats, believing they’re something to do the the Snooper’s Charter. I’ll admit, the timing could’ve been a little better, but I’m not that paranoid. Yet.

You can find out more information on the Direct Line website, with a little more technical specifications available here. In-depth technical information is available upon request to any development teams interested in learning more.

What do you think? Is this part of the future of drone technology? Or is it just a waste of money proof of concept that’ll never go anywhere in the real world? Have you built your own Pixhawk based drones? Are you excited to see what technology this project may offer for your own drones? Let us know in the comments.