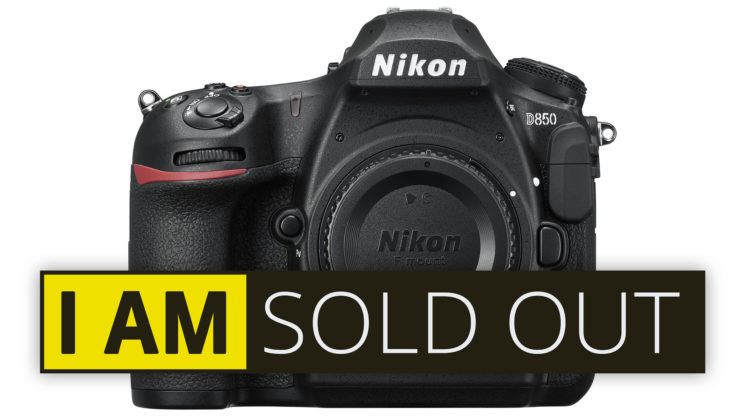 Well, it looks like the Nikon D850 is a big hit, if the pre-order is anything to go by. Nikon have actually sold out of all of their pre-order stock, and have issued a notice apologising for expected shipping delays.

I suppose it’s not really much of a surprise that demand for the D850 is somewhat overwhelming. Once the final specs were made public, and the first reviews out, there were a lot of happy people out there. And I heard talk from more than a few people talking about jumping ship from their current brand to switch back to Nikon.

This is the full notice, translated by Nikon Rumors.

We have received quite a lot of reservations for the Nikon digital single lens reflex camera “D850” planned to be released on Friday, September 8, 2017. Therefore, We may get time to deliver the product.

We deeply apologize for causing serious inconveniences to the concerned parties, including customers waiting for products awaited.

Some customers who have already made reservations may not be able to deliver on the day of release date. In addition, it will be delivered to customers who will reserve it in the future, so it may take time to deliver the item.

We will make every effort to deliver it as soon as possible so we appreciate your understanding.

So, even if you’ve already pre-ordered, your camera may not ship on September 8th as planned. As there’s still 10 days to go before that day, I would imagine the new pre-orders will get backed up a lot more now.

Nikon Rumors believes that if you haven’t pre-ordered already, then there is “no chance you are going to receive a camera in the first batch”. It could be delayed by weeks or even months. With even more pre-orders expected to be delayed, general retail sale is likely to be quite some time away.

If you haven’t pre-ordered yet, but you want to get as far to the front of the list as you can, you should probably go ahead and pre-order now. Otherwise you will be waiting a very long time.